Breastfeeding may protect mothers against depression in later life

And the more children the greater was the effect, an international study found.

The joint American and Korean study looked at mothers now in their 50s and older, who had gone through the menopause.

The World Health Organisation recommends exclusive breastfeeding during the first six months of the baby’s life, but only than a third of British mothers had tried it at all, and the figures are declining

The World Health Organisation recommends exclusively breastfeeding during the first six months of the baby’s life, but only a third of British mothers try it at all, and the figures are falling.

Reduced government support, cuts in public health funding, and negative attitudes have been blamed for some of the worst breastfeeding rates in the world.

Reduced government support, cuts in public health funding, and negative attitude have been blamed for some of the worst breastfeeding rates in the world.

And the study supports mother who controversially breastfeed their children up to schoolage and beyond.

Yesterday lead author Dr Sangshin Patk of Brown University, America, said: ‘Our study findings indicate that breastfeeding is beneficial, not only to infants’ short-term and long-term health, but also to maternal psychological health.

‘Expectant and new mothers could be informed about the long-term benefits of breastfeeding for their mental health.

‘Depression is not only itself a psychological dysfunction but also an important risk factor for various physical problems.’

The study of more than 1,200 mothers, over 50, asked about their family history, including number of children, how long they were breastfed for in all, and the women’s mental health.

‘Women who breastfed for at least 47 months had 67 per cent decreased risk of depression, compared to those less than 24 months.’

The report in the Journal of Affective Disorders said that breastfeeding has protective benefits for children, but the advantages for mothers were not as well known. 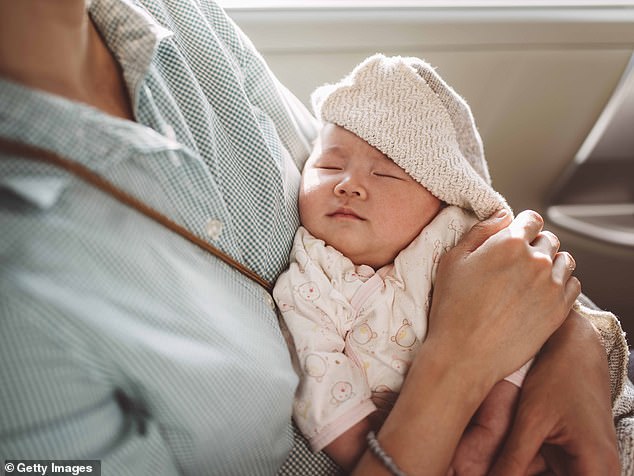 The study of more than 1,200 mothers, over 50, asked about their family history, including number of children, how long they were breastfed for in all, and the women’s mental health

Pregnant women naturally store more body fat, to feed the newborn. Breastfeeding’ burns up’ much of this fat, which otherwise might result in diabetes and hypertension.

Also hormones released during breastfeeding are believed to play a protective role in controlling weight.

And both the bonding and skin-to-skin contact with the newborn have calming influences on both mother and child.

The study concluded: ‘Our results can also be used as an argument that more attention and resources should be focused on supporting mothers with the initiation and continuation of breastfeeding.’

Amy Brown, Professor of Child Public Health at Swansea University, said: ‘Most British women breastfeed for only a matter of a few months, if not weeks.

‘These are women breastfeeding to a very biological norm, in line with what the WHO would recommend – a couple years or so, plus per baby.

‘When women breastfeed oxytocin is released, which is a calming hormone, it helps reduce cortisol stress hormone levels, so less sleepless nights and less stress from having a baby.

‘So if breastfeeding is going well and a woman is not experiencing pain, or difficulties, it can be a nice relaxing experience for her, and she is going to have these postive hormone levels in her body and lower stress hormone.

‘This suggests it is of long term benefit for the mothers, not just a short term one – the cumulative effect of beneficial hormones on their bodies.’