A breastfeeding mother who was struck down by severe earache died just days after she refused to take antibiotics because she feared they might harm her baby.

Rhianne Statom-Barnett, 30, was breastfeeding three-month-old son George and feared prescription-only medication might have adverse effects on him though the transfer of baby milk.

She turned down her GP’s recommendation for a course of antibiotics and her rare ear infection Mastoiditis quickly progressed to meningitis.

Two days later Miss Statom-Barnett, from Wilmslow, Cheshire, was was found unconscious at her mother’s home with her son crying beside her.

She died shortly afterwards in Wythenshawe Hospital in Manchester.

An inquest in Manchester heard Miss Statom-Barnett, who worked as an English lecturer at St Helens College after completing a Masters degree, had given birth to George in December 2015 with partner Ross Norman.

But she began to complain of having ear problems the following March.

Her mother Beverly, 55, a nurse, told the hearing: ‘I got a text from her on March 27 and she said she was feeling unwell.

‘She said she had earache and a headache. She had sent Ross out to get some paracetamols.

‘We went to see her on March and she was very ill at that point. Whilst we were driving her home we had to stop the car so she could get some paracetamols out of the boot.

‘We decided to book an appointment with our GP the next morning for her.

‘We looked at her ear and it had blood and fluid coming out of it. She said she had a severe headache and her ear was hurting a lot. She said it was worse than labour pains. 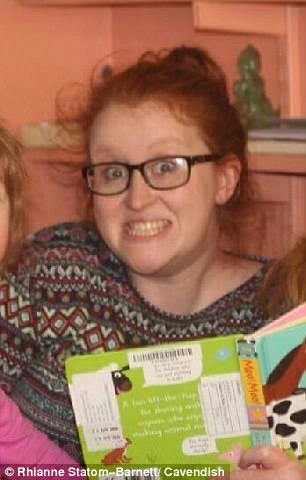 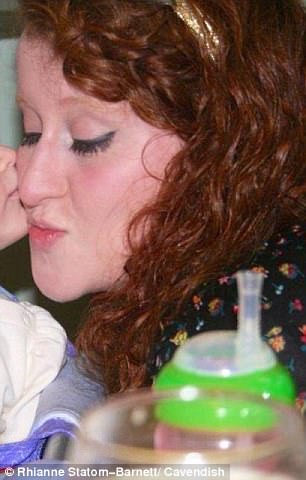 ‘The next day she went for her doctors appointment and they said it was a viral infection in her ear but they gave her no medication for that. There was discharge in her ear.

‘I don’t know the medical reason for why it happened but I knew something was wrong.

‘At around 5am on Saturday April 2 George woke me up crying, and I thought Rhianne had got out of bed to get a drink and he was upset.

‘But when I went into her room I found her in a quite unconscious state. She had vomited and when I called out her name she didn’t respond we called an ambulance.

‘At hospital the senior doctor came out and told us that Rhianne was effectively brain dead. It was heartbreaking.’

Mr Norman told the hearing: ‘She said she had an earache and she took some paracetamols for that and a headache.

‘She often suffered with headaches and cold-like symptoms, so this wasn’t unusual for her.

‘She drove back with her parents on March 30 and I remember seeing gunk in her ear. I knew it was serious. We were told that it was an extreme meningitis infection that had taken hold.’

Miss Statom-Barnett’s GP, Dr Matthew Jones, said: ‘She had a four day history of ear pain and upon examination I saw her ear drum had burst.

‘She had no fevers so there was no evidence of Mastoiditis at the time.

‘I did suggest antibiotics but Rhianne refused and explained she did not want this to affect her whilst she was breastfeeding.

‘I told her that if her condition decreased then she should come back immediately or go to the accident and emergency department.

‘Four in 10,000 people can be affected by mastoiditis, so this is incredibly rare.’

Dr Lina Joseph, a pathologist who carried out a post mortem examination on the mother said: ‘When you are pregnant your blood is more easy to clot and when you are post pregnancy you are more vulnerable and susceptible to infection.

‘This was ill luck and is a very rare complication. This could have been a viral infection on top of a bacterial infection.

Assistant Coroner John Pollard recorded a conclusion of natural causes and said: ‘I know that Rhianne was a fit young woman with a baby and had a particularly active lifestyle.

‘Her death was sudden and very quick and must have been a massive shock to family and close friends. Sadly some things happen and nothing can be done.

‘The evidence in this case shows that the doctors and neurological surgeons did everything they could, but unfortunately there was not a lot they could do.

‘Rhianne had suffered with a severe ear infection, but sadly there was nothing that could have been done. ‘

According to an NHS website, breastfeeding mothers can take ‘most’ antibiotics but are advised to always check with their GP, midwife, health visitor or pharmacist.