Breathing: Rats and pigs can survive on oxygen fed through their RECTUM, study finds

We all know at least one person who metaphorically talks out of their rear end, but it may be possible to literally breathe via your behind, a study has determined.

This is a trick employed by certain aquatic organisms — like some freshwater catfish, loaches and sea cucumbers — to help them survive in low-oxygen conditions.

Bypassing lungs or gills, this method sees oxygen absorbed directly into the blood via the intestinal lining. It has long been debated if mammals can do the same.

Experts led from the Tokyo Medical and Dental University have demonstrated that mice, rats and pigs can take in oxygen delivered by means of a special liquid enema.

Should the findings prove applicable to humans as well, this alternative ventilation method could be used clinically to help stave off respiratory failure.

While unusual, this approach could be beneficial in this time of COVID-19, which has seen critical shortages of conventional ventilators in hospitals around the globe.

Researchers believe that mechanical ventilation (left) could be replaced with intestinal liquid ventilation (right), in which patients would be given an enema of oxygenated perfluorochemicals 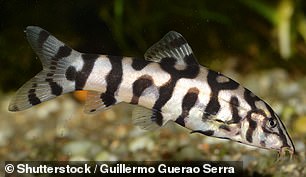 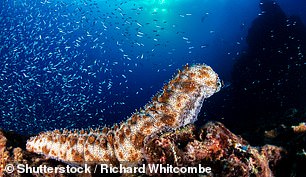 ‘Artificial respiratory support plays a vital role in the clinical management of respiratory failure,’ said paper author and Takanori Takebe of the Tokyo Medical and Dental University and the Cincinnati Children’s Hospital.

Respiratory failure can result from the contraction of various severe illnesses — including acute respiratory distress syndrome, COVID-19 and pneumonia.

‘Although the side effects and safety need to be thoroughly evaluated in humans, our approach may offer a new paradigm to support critically ill patients with respiratory failure,’ Dr Takebe added.

In their study, Dr Takebe and colleagues first designed an intestinal gas ventilation that was capable of administering pure oxygen to mice via their recta.

The team demonstrated that, without the ventilation system, mice were not able to survive even 11 minutes in extremely low-oxygen conditions.

However, with intestinal gas ventilation, the researchers found that more oxygen was able to reach the mice’s hearts, and three-quarters of the rodents were able to survive in the extreme low-oxygen conditions for a whole 50 minutes. 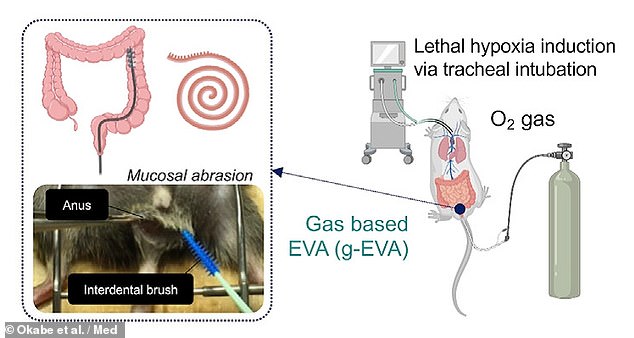 This gas ventilation system has a drawback in that it works most efficiently when the muscosa — the inner lining of the intestinal tract — is physically abraded with a brush.

This means that such is unlikely to be clinically suitable, especially when dealing with severely ill patients, the researchers conceded.

To circumvent this issue, the team developed a liquid-based alternative which makes use of so-called oxygenated perfluorochemicals.

This compound has previously been determined to be biocompatible and safe to use in humans, and has been used clinically for airway-based liquid ventilation. 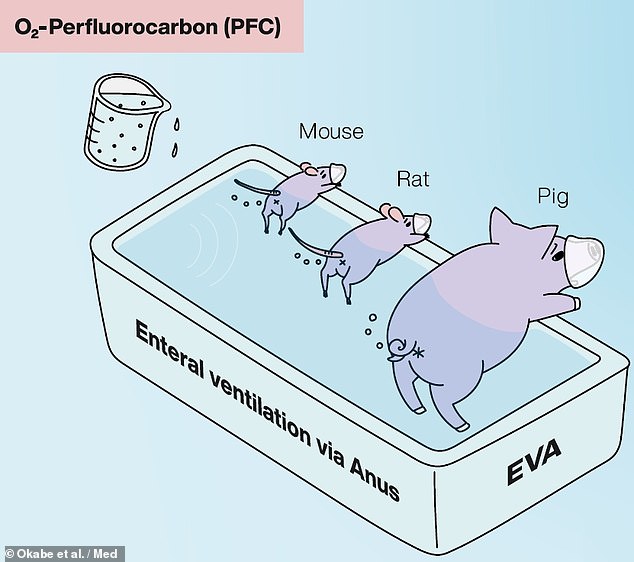 The team developed a liquid-based alternative which makes use of so-called oxygenated perfluorochemicals — and tested it on mice, rats and pigs in the lab

In lab tests, the intestinal liquid ventilation system was also found to provide therapeutic benefits to mice, rats and pigs who were exposed to non-lethal, low-oxygen conditions.

The mice were found to be able to better oxygenate their hearts and walk further (managing a mean rate of 9.9cm per minute) in a 10 per cent oxygen chamber than their peers who were not given the treatment (who managed 0.4cm per minute).

In pigs, similar results were seen, with the intestinal liquid ventilation resulting in increased bodily oxygen levels and a reduction in skin pallor and coldness, without the production of obvious negative side effects.

‘We show the effectiveness of an enteral ventilation approach in attaining systemic oxygenation in both rodent and porcine models,’ the team wrote in their paper.

‘Intrarectal delivery of a liquid form of O₂ known as conjugated perfluorocarbon […] is highly tolerable and efficacious in ameliorating severe respiratory failure.’

In pigs the intestinal liquid ventilation resulted in increased bodily oxygen levels and a reduction in skin pallor and coldness, without the production of obvious negative side effects. Pictured: the process of oxygenating the perfluorochemicals (left), preparing the enema (centre) and delivering it to the pig (right)

‘This is a provocative idea and those first encountering it will express astonishment,’ Caleb Kelly — an internal medicine expert from Yale University who was not involved in the present study — wrote in an associated commentary article.

‘Yet, as the potential clinical role is considered and the data presented by [the team] is examined, enteral ventilation via anus emerges as a promising therapy deserving scientific and medical interest.’

The finding, Dr Kelly added, ‘opens the possibility of recruiting the distal gut to aid when mechanical ventilation of the lungs is inadequate.’

With their initial study complete, the researchers are planning to conduct further preclinical studies, while also beginning the regulatory steps needed to bring their respiration system to a clinical application that could be used on human patients.

Their ongoing work is being supported by the Japan Agency for Medical Research and Development, with the specific goal of helping to combat COVID-19.

‘The recent SARS-CoV-2 pandemic is overwhelming the clinical need for ventilators and artificial lungs — resulting in a critical shortage of available devices, and endangering patients’ lives worldwide,’ Dr Takebe said.

‘The level of arterial oxygenation provided by our ventilation system, if scaled for human application, is likely sufficient to treat patients with severe respiratory failure, potentially providing life-saving oxygenation.’

The full findings of the study were published in the journal Med.

It’s usually a complication of a serious existing health condition. This means most people are already in hospital by the time they develop ARDS.

When to get urgent medical help

Although most people get ARDS when they’re already in hospital, this is not always the case. It can start quickly as a result of an infection, such as pneumonia, or if someone accidentally inhales their vomit.

Call 999 immediately to ask for an ambulance if a child or adult is having breathing problems.

ARDS happens when the lungs become severely inflamed from an infection or injury. The inflammation causes fluid from nearby blood vessels to leak into the tiny air sacs in your lungs, making breathing increasingly difficult.

The lungs can become inflamed after:

There’s no specific test to diagnose ARDS. A full assessment is needed to identify the underlying cause and rule out other conditions.

The assessment is likely to include:

If you develop ARDS, you’ll probably be admitted to an intensive care unit (ICU) and use a breathing machine (ventilator) to help your breathing.

You breathe through a mask attached to the machine. If your breathing is severely affected, a breathing tube may be inserted down your throat and into your lungs.

Fluids and nutrients will be supplied through a feeding tube (nasogastric tube) that’s passed through your nose and into your stomach.

The underlying cause of ARDS should also be treated. For example, if it’s caused by a bacterial infection, you may need antibiotics.

How long you’ll need to stay in hospital depends on your individual circumstances and the cause of ARDS. Most people respond well to treatment, but it may be several weeks or months before you’re well enough to leave hospital.

Because ARDS is often caused by a serious health condition, about 1 in 3 people who get it will die. But most deaths are the result of the underlying illness, rather than ARDS itself.

For those who survive, the main complications are linked with nerve and muscle damage, which causes pain and weakness.

The lungs usually recover and long-term lung failure after ARDS is rare.