Some of the world’s most breath-taking landscapes have been captured in a stunning series of images for a prestigious photo contest.

More than 25,000 photos were entered into Agora’s ‘The World’s Best Photos of #Landscape2019’ and 50 finalists have been selected.

‘Ijen Blue Crater’ by @pokokemoto shows Mount Ijen, a quiet but active volcano located in East Java, Indonesia. Set amidst a stunning landscape of volcanic cones, the beautiful turquoise coloured sulphur lake that resides at its heart is the largest acidic lake in the world 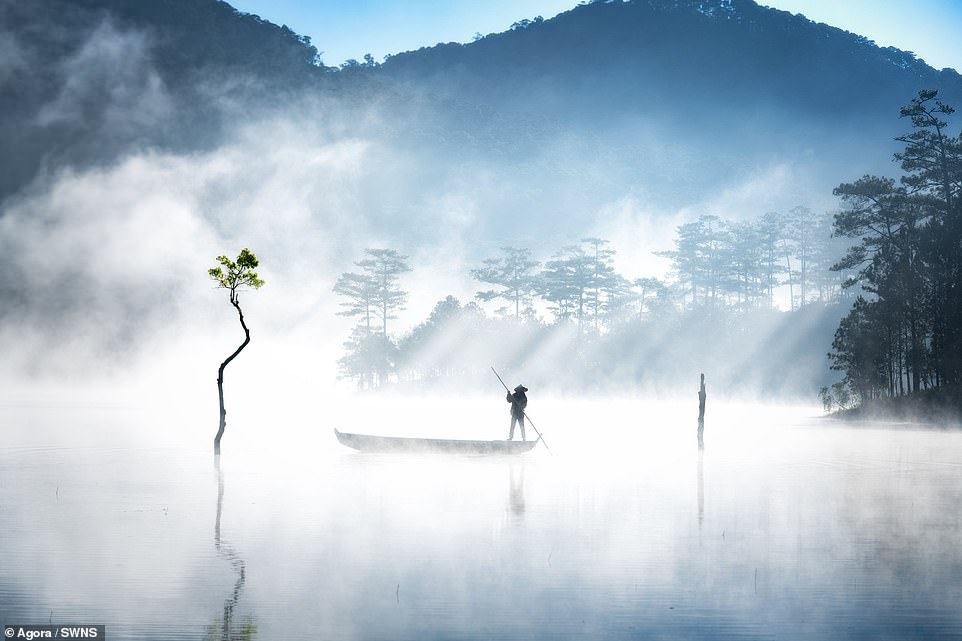 ‘Tuyen Lam Lake’ by @anhtrungqng shows Tuyen Lam Lake in Da Lat, Vietnam. ‘This is the largest freshwater lake in Da Lat, a place that tourists often visit,’ said photographer Anh Trung. ‘The ferryman carries passengers from the ferry terminal to the eco-tourism area, located further in the lake. In the early morning, the lake is often foggy, creating a shimmering and mysterious setting’ 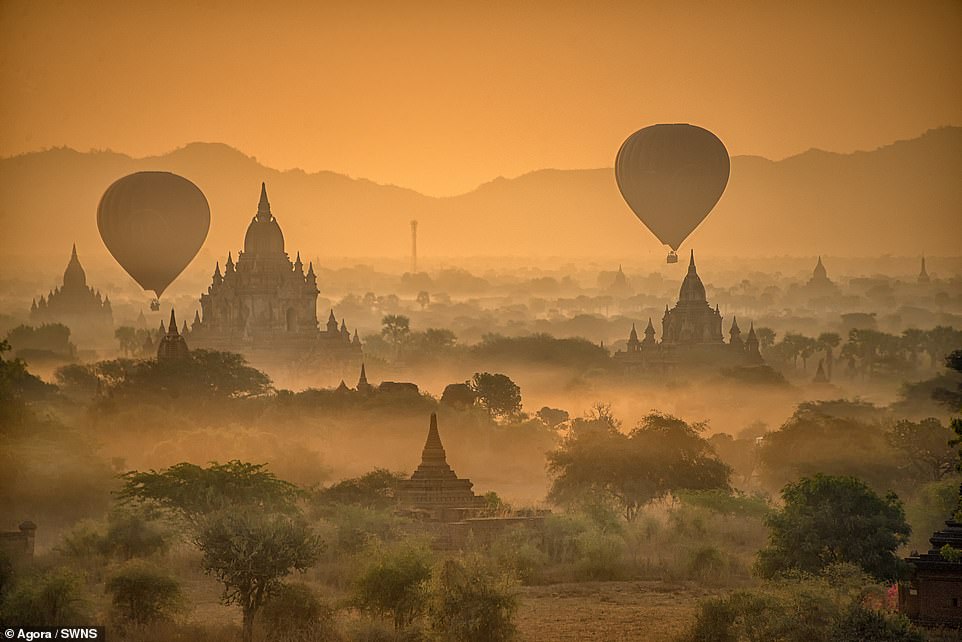 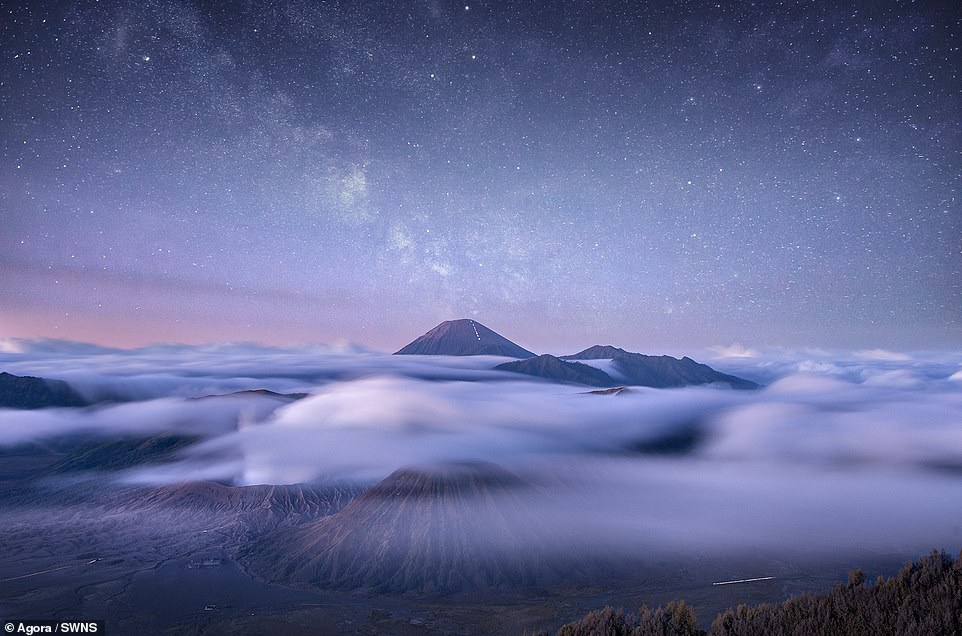 One photographer from Vietnam pledged to donate part of any prize money to a ferryman he captured in a mesmerising picture.

The photo, by @anhtrungqng, features a ferryman pushing his empty boat to fetch passengers to take across the largest freshwater lake in Da Lat, Vietnam.

@anhtrungqng said: ‘In the early morning, the lake is often foggy, creating a shimmering and mysterious setting.’ 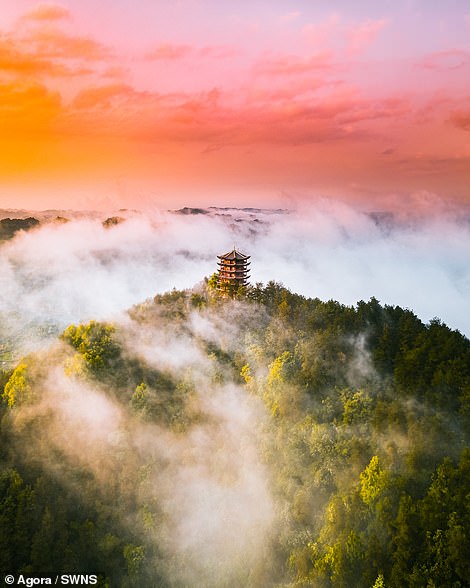 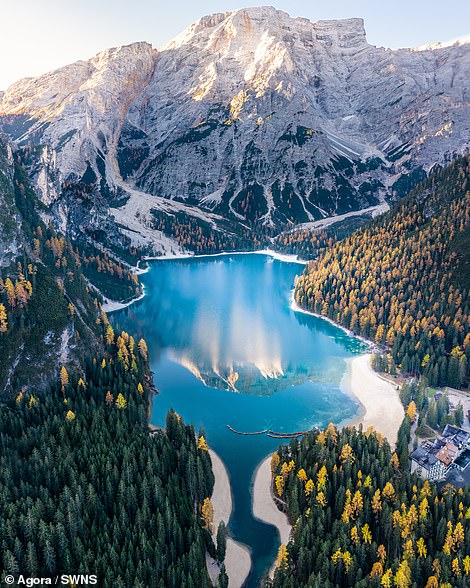 Best seats in the house, like in the middle of storm’ by @panvelvet (left) shows a spectacular sunset over Fenghuang, one of China’s most famous old towns. ‘Autumn in the Dolomites’ by @tom.bridges (right) shows Lago di Braies a bright blue mountain lake in the heart of the Dolomite mountains in Italy 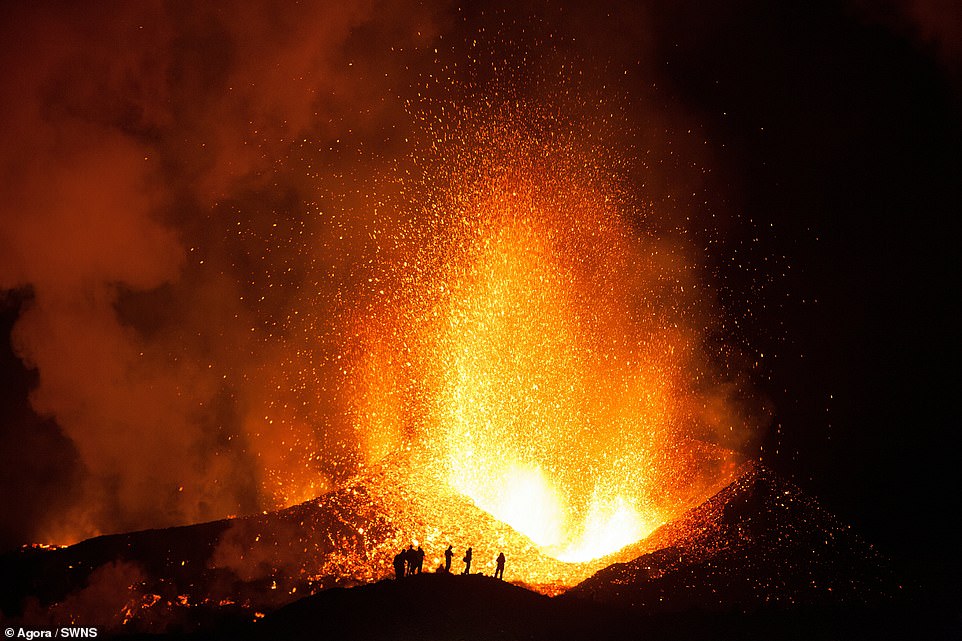 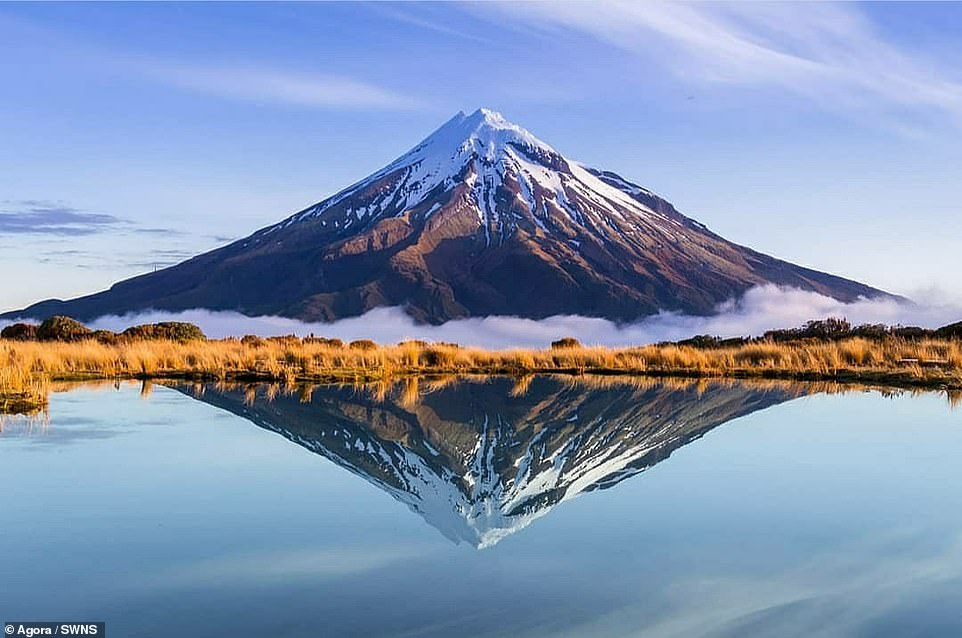 The finalists’ pictures also include a stunning snapshot of Perucac Lake in Tara National Park, Serbia.

The photographer, @djollebate, said: ‘I want to show to the world that Serbia is an incredibly beautiful small country with a lot of spots like this one.

‘I was up there with my three-year-old daughter on my shoulders – we had to go through a bear area and I spent a lot of energy holding her close to me. 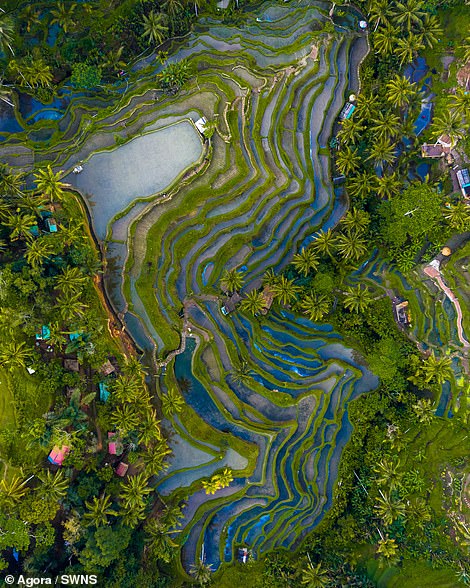 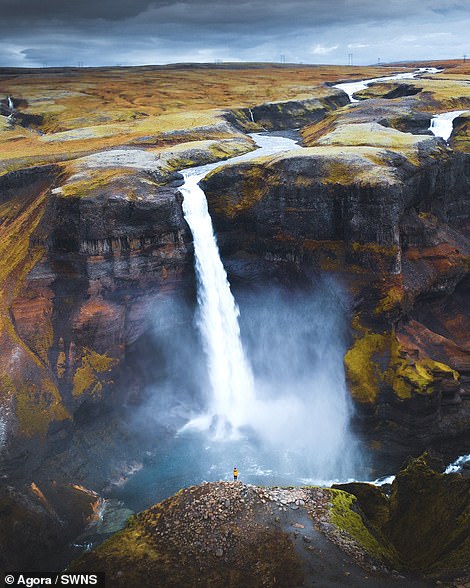 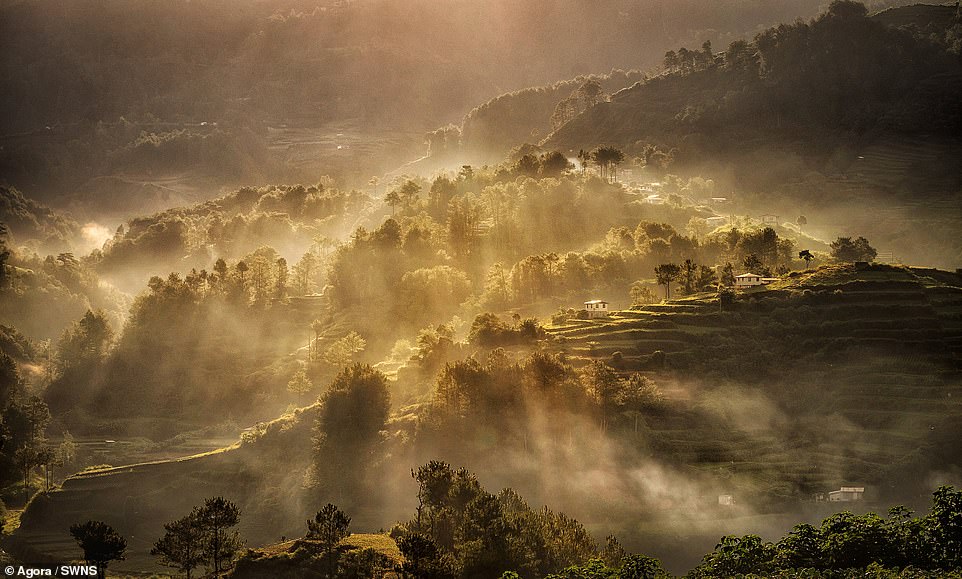 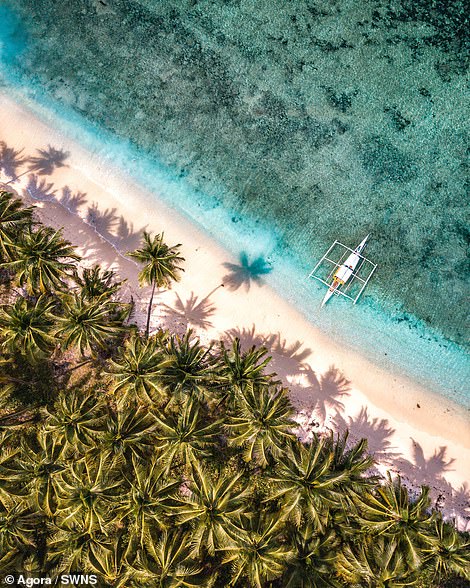 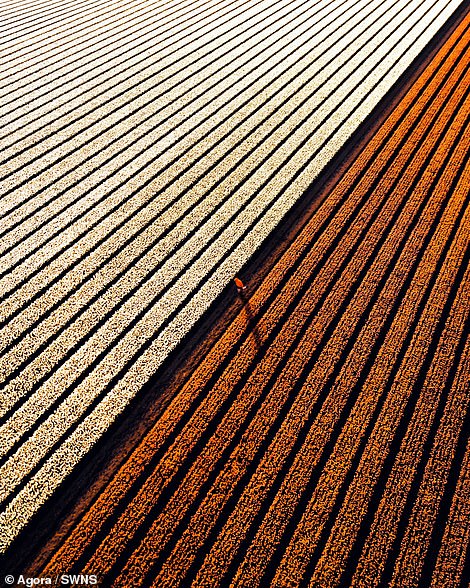 ‘Untouched paradise’ by @maky&matt (left) shows an aerial shot of the Siargao Island, Philippines and ‘The Dutch Tulips’ by @cunodebruin (right) shows a person walking through the immense tulip fields in the Netherlands 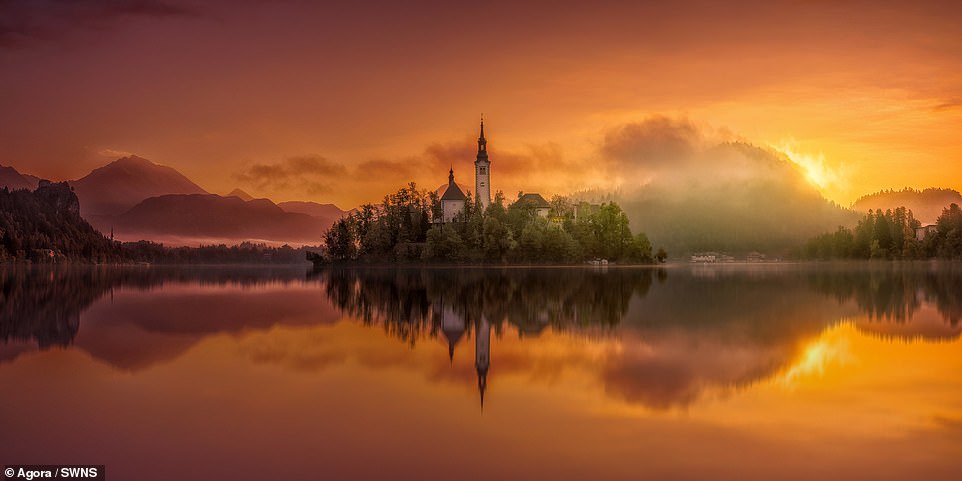 ‘Orange Bled’ by @saavedraphotography shows a panorama of the Bled Lake in Slovenia at sunset, centred with an island chapel

‘While I waited for the right moment to take a photo because it was cloudy and light was bad, suddenly I saw this beautiful ray of light just at the right place…’

Other pictures include beautiful castles in France, and the cosmic clouds over an active volcano.

Many of the images featured aerial landscape shots. 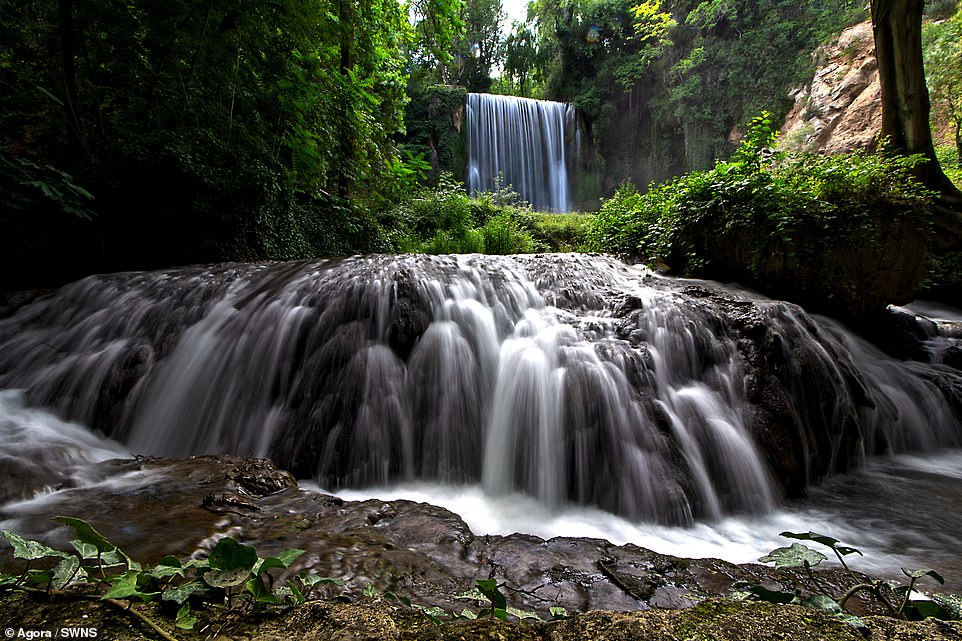 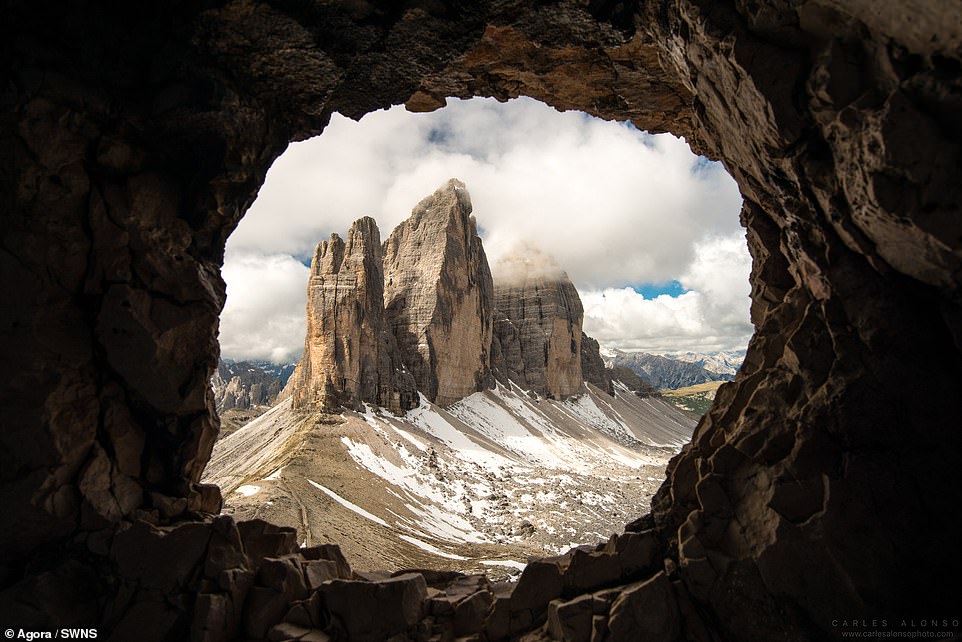 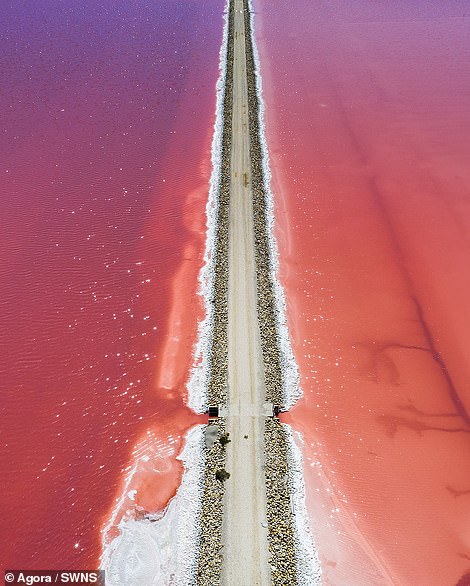 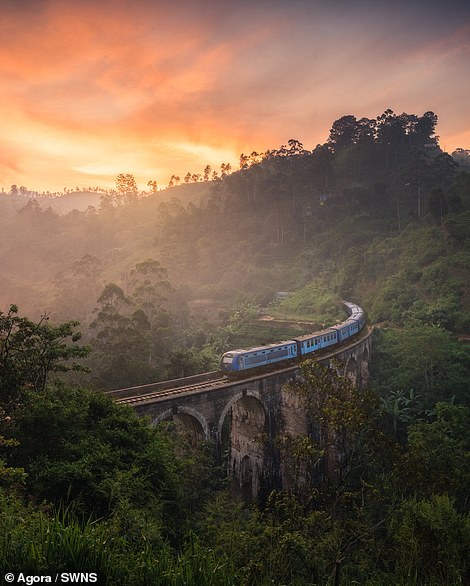 ‘A path through the red sea’ by @angiolomanetti (left) shows an aerial shot of Salin de Giraud near the city of Arles, southern France. ‘Morning Arrival | Sri Lanka’ by @leemumford8 (right) shows a train going over the iconic nine-arch bridge in Sri Lanka at sunrise 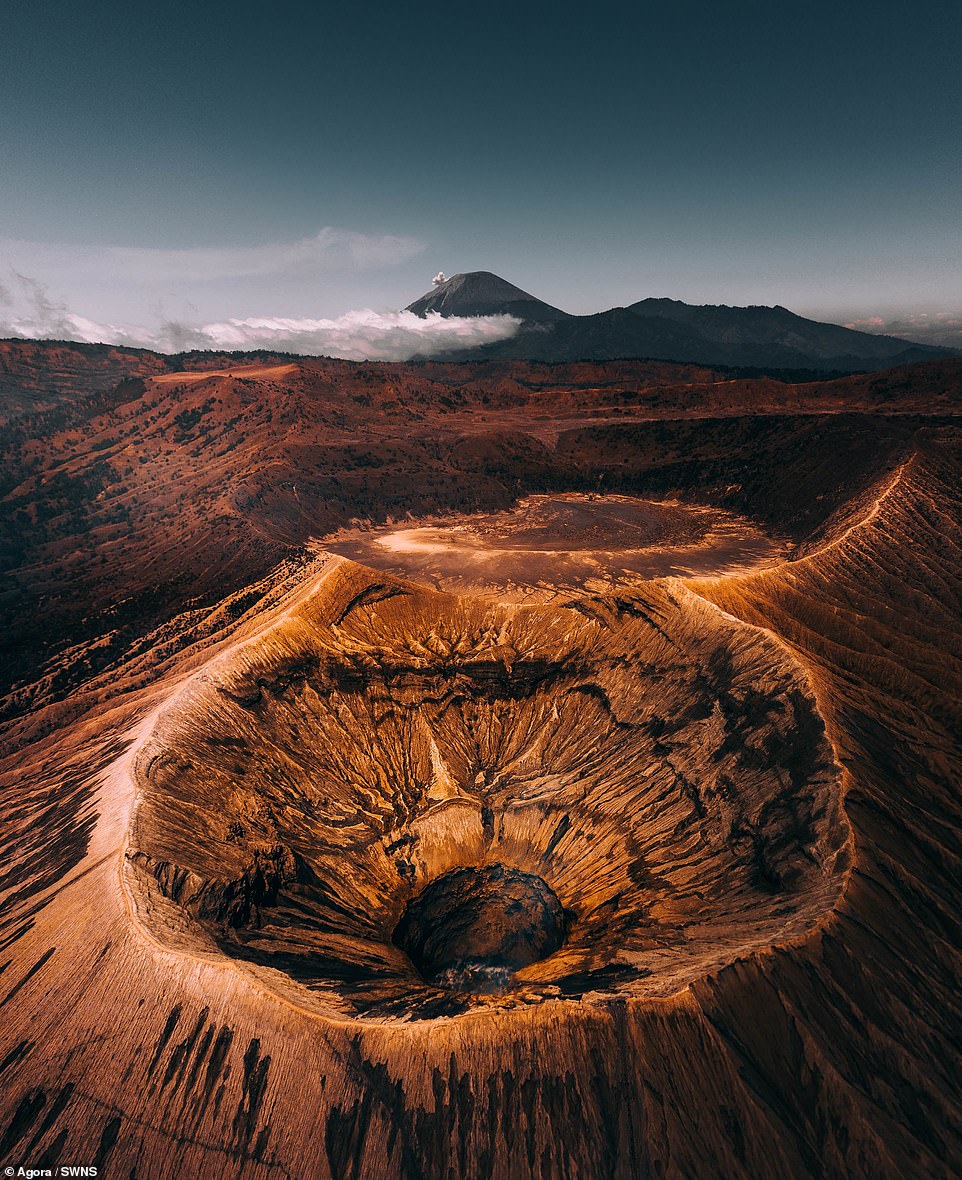 ‘Vulcan’ by @jprphotos shows Mount Bromo, an Indonesian active volcano that attracts landscape-lovers from all over the world 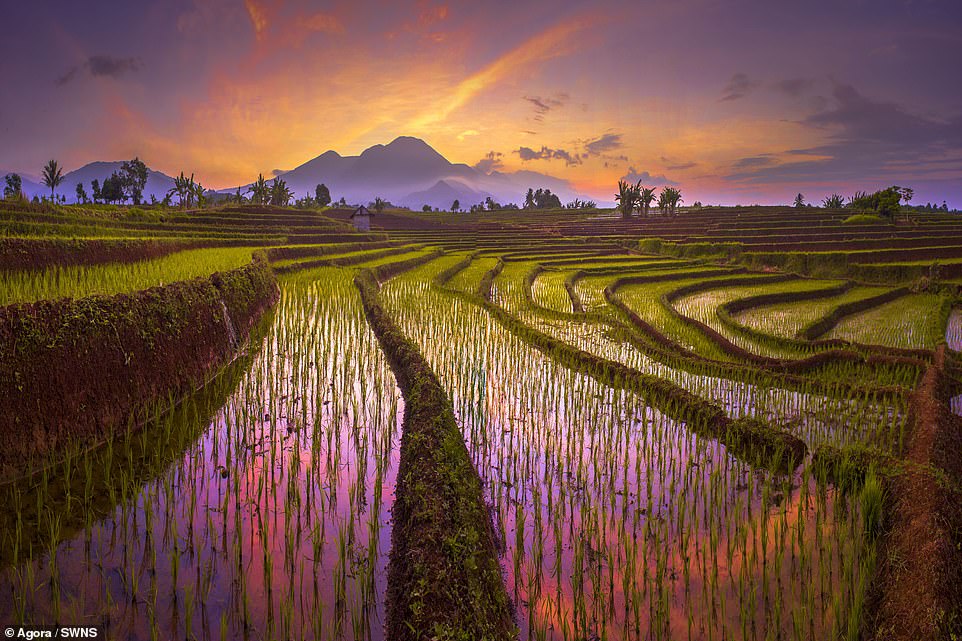 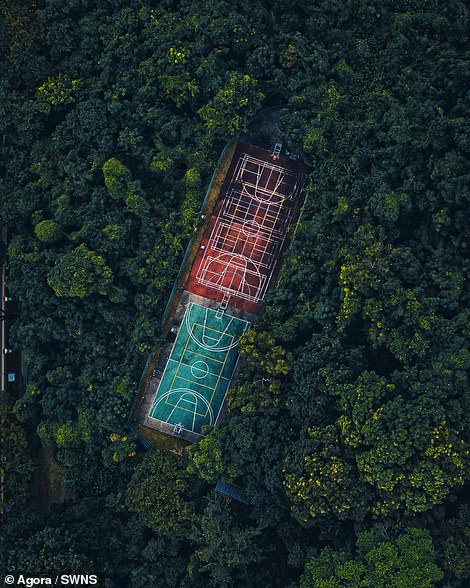 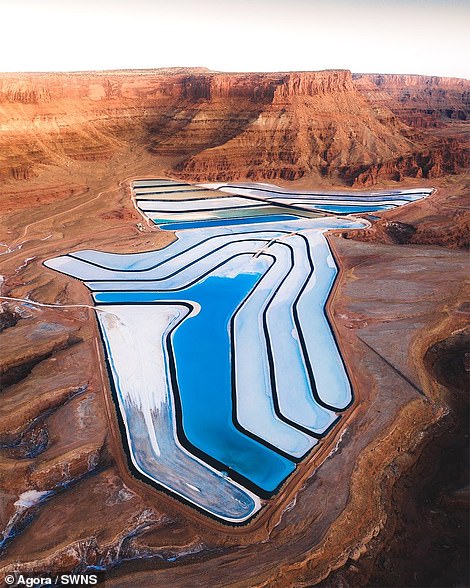 While there were seven entries from the UK, none of them managed to make the final 50.

The Agora community can now vote for their favourite photo in the app and help decide who will be the #Landscape2019 hero. 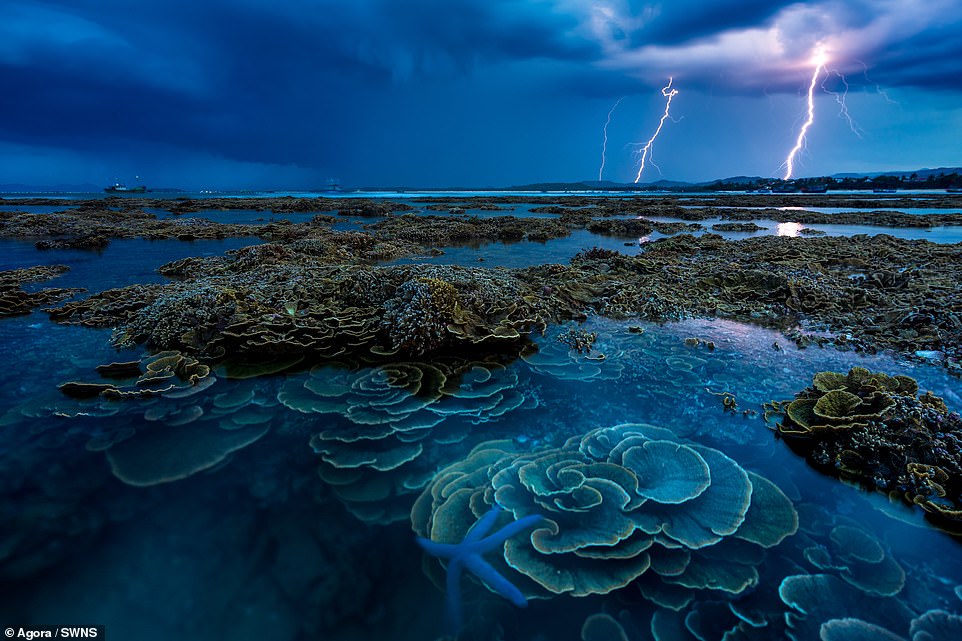 ‘In the thunderstorm’ by @dean_nguyen shows lightning crashing into the sea over the coral reefs of Hon Yen island, Vietnam 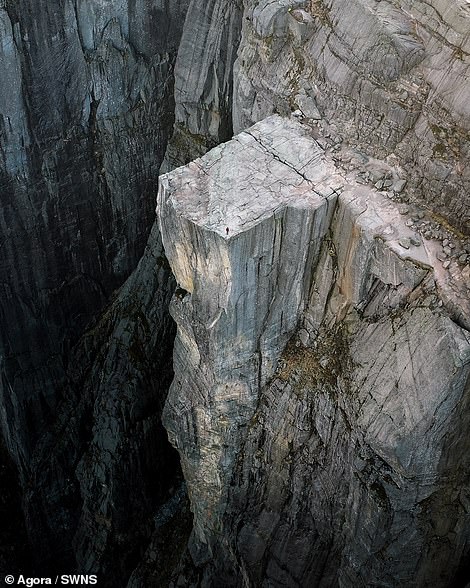 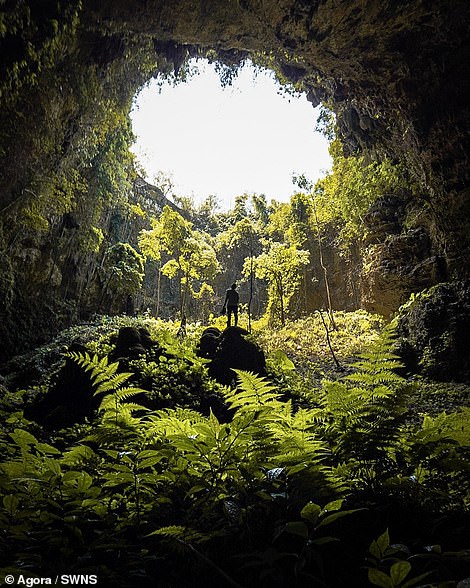 ‘The ascent’ by @joncleave (left) shows a person standing on Pulpit Rock, Preikestolen in Norway. ‘Untitled’ by @jordisark (right) shows a man surrounded by fresh green foliage in a Spanish cave 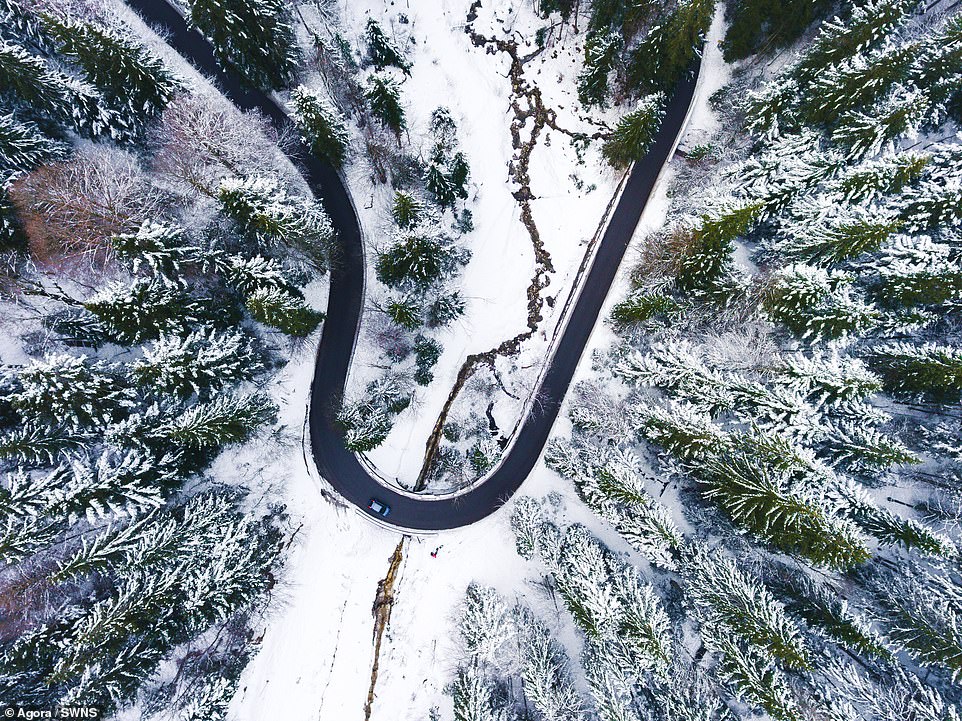 ‘Off Road’ by @thecrowface shows a car journeying along a German road, winding through trees topped with icy snow 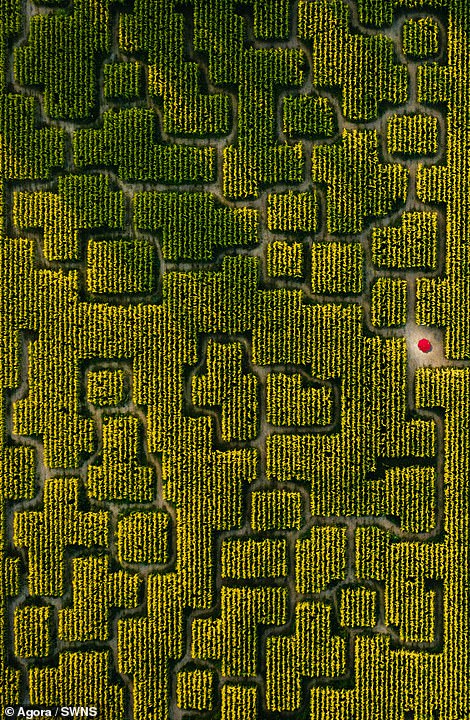 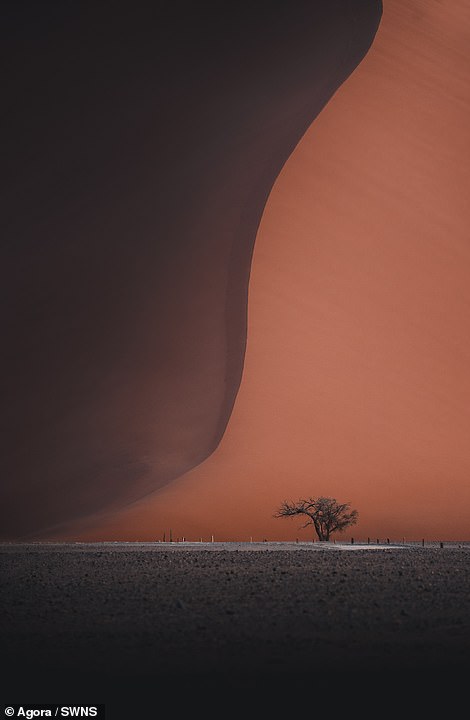 ‘The Dune’ by @anskar (right) shows a massive sand dune in Sossusvlei, Namibia. ‘Lost in the maze’ by @emxpi (left) shows a maze with a spot of red from an umbrella