Under-fire Brendan Rodgers ‘storms out of a media huddle’, raging at a reporter’s ‘disgraceful’ questions about it being too expensive for Leicester to sack him because of his £10m-per-year contract

Under-fire Leicester City boss Brendan Rodgers stormed out of a media briefing shortly after his side’s 0-0 draw with Crystal Palace on Saturday.

The stalemate draw with the Eagles ensured Leicester now have their lowest point tally after 10 games since the 1983-84 campaign.

Scrutiny from fans has been growing on Rodgers but club owner Aiyawatt Srivaddhanaprabha has so far kept faith in the Northern Irishman.

Sportsmail revealed last month that the six-year deal Rodgers signed in 2019 is thought to contain a significant pay off if he is dismissed.

The pressure on Rodgers became more evident following the draw with Palace, losing his temper after being asked a question which he deemed to be ‘disgraceful’, as per the Telegraph.

Asked whether reports of him being on £10million-a-year are accurate and whether this means he’s too expensive to sack, Rodgers replied: ‘I have read on the news what I am supposed to be on and I know for sure that is a total fabrication.’

‘It’s nowhere near. I actually think it is a disrespectful question, very disrespectful. I never asked you how much money you are on or whether there is any blockage in your role from your owners.

‘I don’t think you need to worry about my wages. If there is a stumbling block in anything, you need to ask the owners that. It’s a disgraceful question.’ 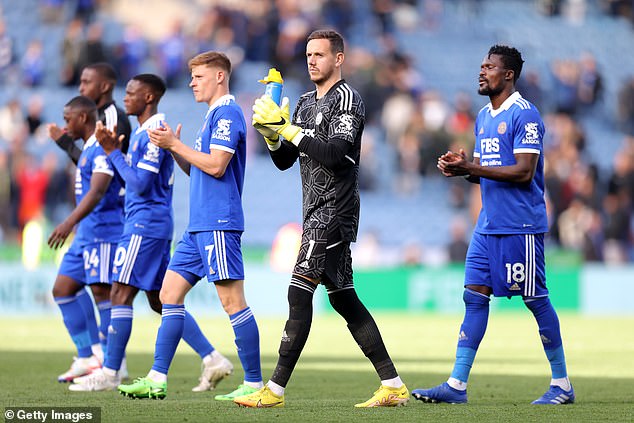 Leicester now sit 19th in the Premier League after picking up just one win from their opening 10 games, above Nottingham Forest on goal difference.

Rodgers and his players were booed by their own supporters, and a group of them held a banner which said: ‘Board – the time for action is now’.

Pressed about his thoughts on the banner, he called on supporters to be angry at him and not the owners.

‘When I came in here it was to take the team up the league and to try and disrupt the top teams and for a few years we’ve been able to do that,’ Rodgers said.

‘We had two fifth-placed finishes, an eighth-placed , which is three out of four of the best finishes in the club’s history I believe. We won the FA Cup for the first time in history and then the Community Shield, and we haven’t been able to strengthen in the summer. 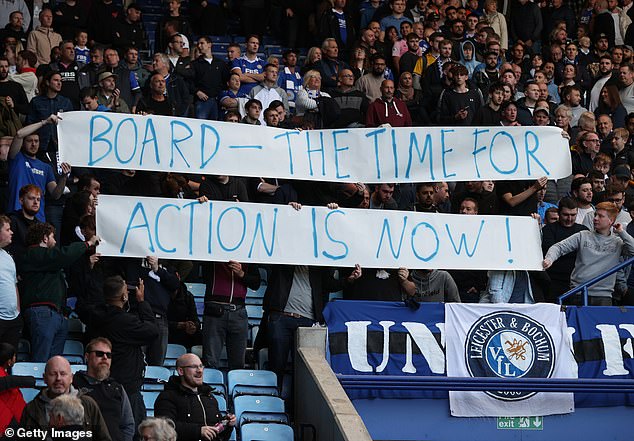 ‘Naturally if you can’t strengthen and other teams do then you’re going to get overtaken. If there’s any anger that will come anyone’s way, it will be to me because it cannot be to the owners. They have been amazing here.

‘That is something I take on board but it doesn’t shift my concentration on the job. I can regulate all of that pressure. I understand it.

‘When we were finishing fifth and winning the FA Cup I had critics, and when you’re at the bottom you’ll definitely have critics.’

Leicester will once again return to the Kings Power in search of their second win of the season when they host Leeds on Thursday night.