A beer fridge in the shower and a BAR TAP in your bedroom: BrewDog announces the launch of themed hotels in Edinburgh and Manchester

BrewDog has announced the launch of an ale-themed Edinburgh hotel, with another outpost in Manchester also on the way.

Both venues will include unique perks such as beer fridges in the showers and bar taps in the bedrooms, so guests can pour themselves pints 24-7. Free Brompton bikes will also be on offer (but best ridden before a bar session).

BrewDog has announced the launch of an ale-themed Edinburgh hotel (rendering above) inside a former school, close to the Royal Mile on New Street 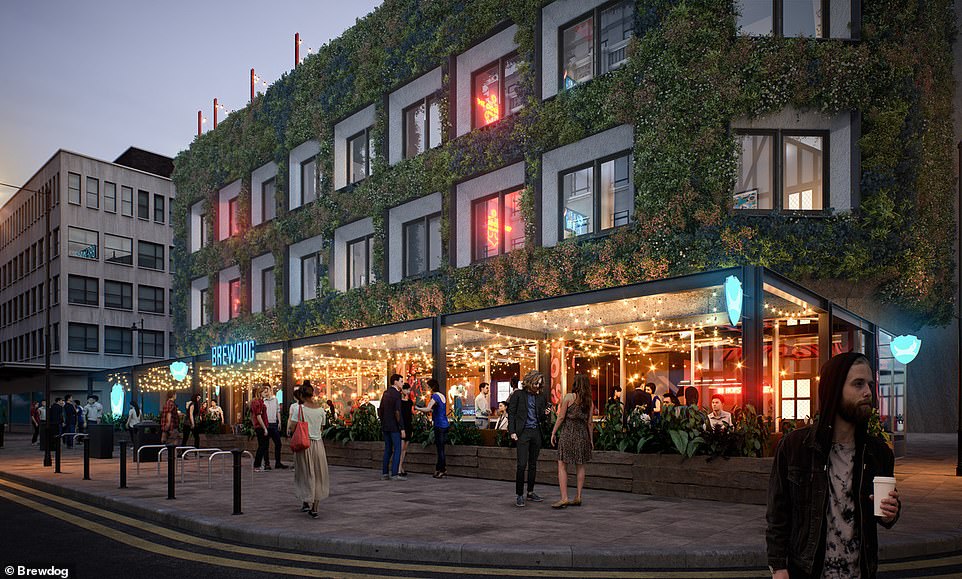 A rendering showing BrewDog’s new Manchester hotel, where there will be 18 rooms in total 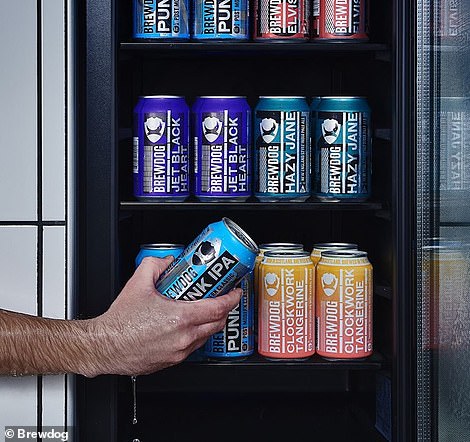 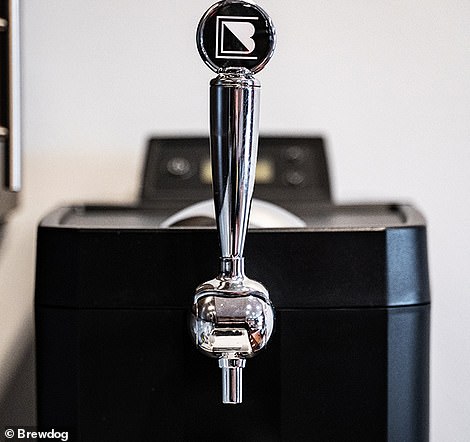 Those wanting the full BrewDog experience should book the hotels’ all-inclusive packages, which will include breakfast, dinner with a flight of beers thrown in and a beer masterclass.

The DogHouse Manchester is set to open this summer, while BrewDog’s Edinburgh venue will launch in the autumn.

The beer brand already has a solid fan base in both cities, with two bars in each location.

BrewDog announced the launch of its Edinburgh hotel on Twitter following its annual general meeting with shareholders on Saturday.

It will be located close to the Royal Mile on New Street inside a former school.

A rendering shows what the exterior of the property will look like, with a modern bar attached to the period red brick building. There will also be an outdoor terrace. 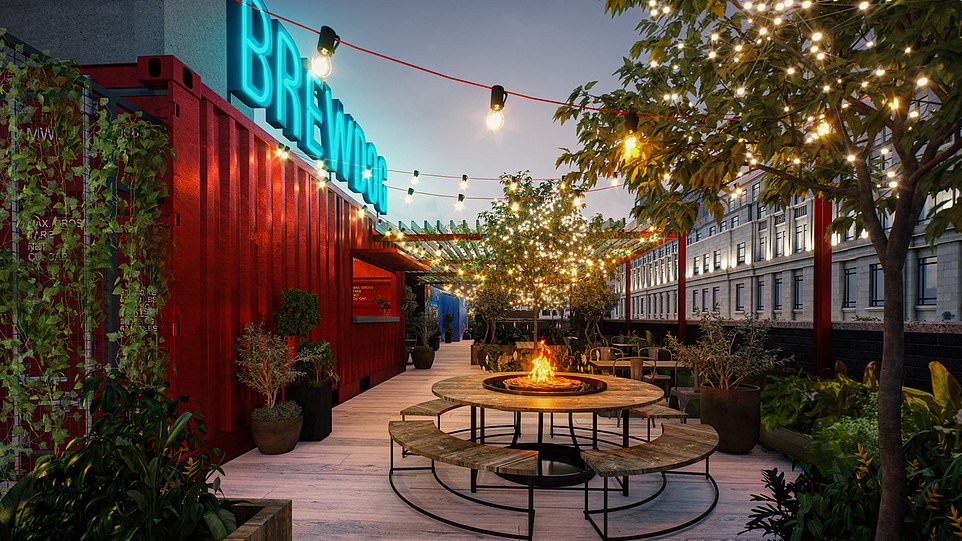 The rooftop bar at BrewDog’s Manchester hotel, shown in a rendering above

A spokesperson told MailOnline Travel that the Edinburgh branch will have 20 rooms. They added: ‘All the rooms at the Edinburgh DogHouse will be sustainable, the hotel will be built with conscious construction at its core to align with BrewDog’s recent b-corp status and commitment to be carbon negative.’

There will be 18 rooms in total, with other amenities including a BrewDog bar with 30 different beers on offer and a rooftop bar.

A rendering shows the property dripping with foliage with sustainability, again, at the forefront of things. 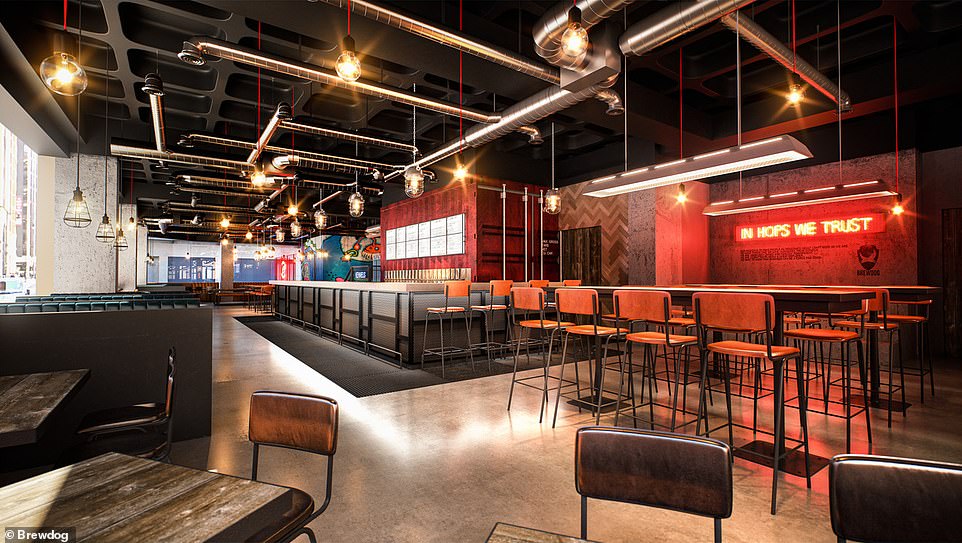 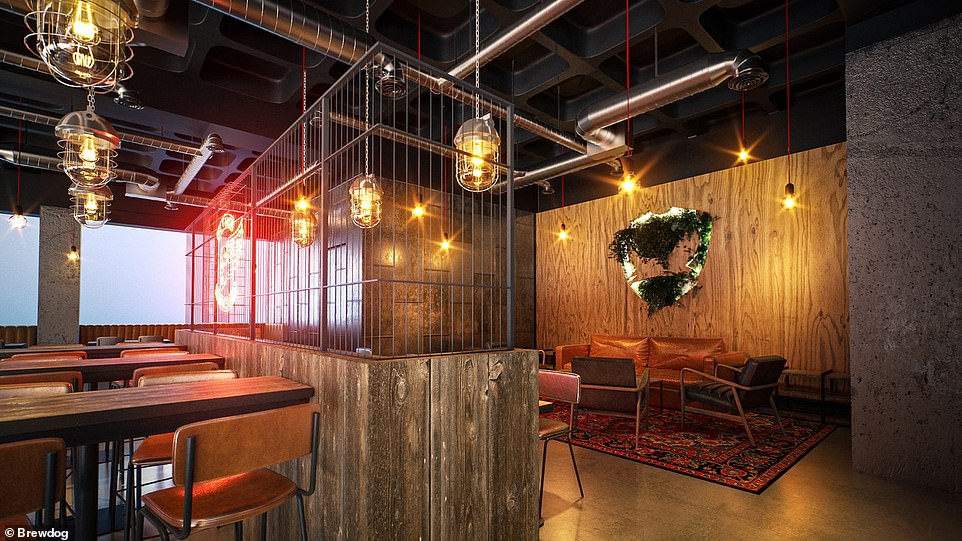 This isn’t the beer brand’s first foray into the world of hotels.

It has properties in several locations around the world, including a small outpost in Aberdeen – close to where it is headquartered – and two in Columbus, Ohio.

Another hotel is also set to open in Australia in 2022.

The four-storey hotel is to be located next to BrewDog’s brewing facility and taproom in Murarrie, Brisbane.

Since its launch in 2019, BrewDog Brisbane has become one of BrewDog’s most successful sites globally.