Brexit battle is ‘not yet won’ warns Jacob Rees-Mogg

The battle to take Britain out of the EU is ‘not yet won’, Jacob Rees-Mogg warned last night – as campaigners launched a fundraising drive to take on calls for a second referendum.

In an open letter yesterday, Tory MP Mr Rees-Mogg made a direct appeal for funds to help take on the lavishly resourced Remain campaign.

The prominent Eurosceptic described diehard Remainers as ‘cave dwellers (who) still want to stop the process’. But he warned that the pro-Brexit camp still had a fight on its hands to ensure Britain leaves the EU in a year’s time.

‘Remain campaigners have still not given up on their attempts to trap us inside the EU,’ he said. ‘They want us to go crawling back to Brussels, in what would be the biggest humiliation since Suez.

In an open letter yesterday, prominent Tory backbencher Jacob Rees-Mogg (pictured) made a direct appeal for funds to help take on the lavishly resourced Remain campaign

‘A betrayal of this kind would be the most almighty smash to the national psyche that could be imagined.

‘Despite our historic vote for change and independence in 2016, the battle is not yet won. Help us secure the clean, swift Brexit you voted for – and defeat the Remainers who do not believe in Britain.’

The intervention came as the pro-Remain group Best for Britain prepared to launch a £500,000 advertising campaign today aimed at forcing a second referendum. The group, bankrolled by US billionaire George Soros, has prepared a ten-week advertising blitz.

Campaign chairman Lord Malloch-Brown, a former Labour minister, said: ‘It has been 21 months since the Brexit referendum. Our research shows that the British people – both Leave and Remain – are profoundly and increasingly frustrated that they still do not know what Brexit means.’ 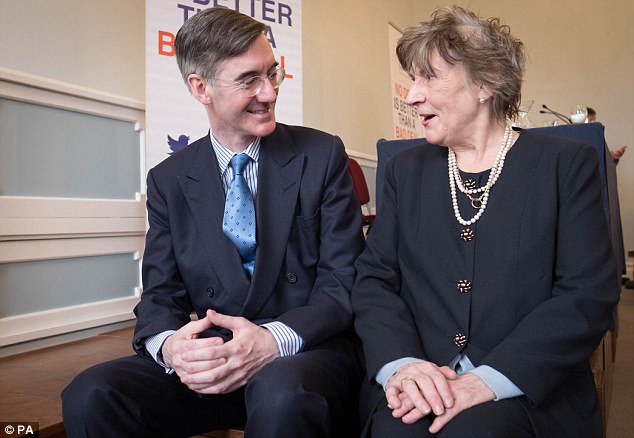 Leading Leave supporter Mr Rees-Mogg, pictured with his mother Gillian yesterday, warned that ‘Remain campaigners have still not given up on their attempts to trap us inside the EU’

Efforts to thwart Brexit are now being led by a string of well-funded groups, including Best for Britain, Open Europe and the European Movement, as well as organisations such as the CBI and TUC. By contrast, there is almost no organised campaigning to ensure the referendum result is respected.

Mr Rees-Mogg clashed publicly yesterday with former Tory chairman Lord Patten, who said the closest ministers had come to a new trade deal was ‘the checkout at Waitrose’.

Lord Patten used a speech to mark a year until Britain leaves the EU to call for the UK to stay in the customs union to prevent a return to the days of ‘shooting and maiming’ in Northern Ireland. The former EU commissioner also took a swipe at Mr Rees-Mogg, who he has known since he was eight, saying: ‘I think he has allowed himself a bit to be taken over by his own image and caricature.’

Firms are unlikely to suffer shortages of workers even without a supply of cheap foreign labour after Brexit, a report has found.

Claims by employers that they would not attract more UK workers even if they raised wages were ‘not credible’, said an independent panel of Government advisers.

Interim findings by the Migration Advisory Committee (MAC) undermined complaints by businesses that they will struggle if the supply of migrants dries up once the UK leaves the European Union.

The 67-page analysis, unveiled yesterday, indicated that blue-collar British workers were being shunned by companies which had become dependent on workers from the European Economic Area (EEA).

The MAC report said the prospect that migration curbs would lead to a large number of unfilled vacancies was ‘unlikely’.

It added: ‘Individual employers would almost always be able to recruit resident workers if they paid wages sufficiently above the going rate.’