Brexit could kill 5,600 people a year as fresh fruit and veg prices shoot up

A ‘hard Brexit’ could kill up to 5,600 people a year because people won’t be able to afford as many fruit and vegetables, researchers claim.

Scientists say the rising price of importing food will worsen people’s diets and lead to more cases of cancer, heart disease and stroke within 10 years.

More than 90 per cent of the UK’s fruit and vegetables are imported, meaning the prices will likely go up when it leaves the EU.

And pricier fresh foods could put people off, experts say, putting them more at risk of developing deadly diseases.

This rise in disease could also cost the NHS an extra £600million a year, according to the Oxford University scientists.

But Julian Jessop, chief economist at the Institute of Economic Affairs, told MailOnline the claim Brexit could lead to deaths was ‘stupid on so many levels’.

Scientists say the rising price of importing food will worsen people’s diets and lead to more cases of cancer, heart disease and stroke within 10 years

Researchers compared how people’s diets are expected to change after Brexit with how those diets will affect the risk of disease.

They predict a ‘hard Brexit’ could cause an extra 5,600 deaths from disease each year compared to current levels, whereas a ‘soft Brexit’ would kill 2,700 more people.

The paper’s author, Dr Marco Springmann, wrote in The Conversation: ‘Brexit is expected to increase trade costs and make food imports more expensive, something that could lead to changes in diets and dietary risk factors that influence health.

‘Foods that are critical for good health would be especially affected.’

Dr Springmann and his colleague, Dr Florian Freund, say increased costs could see everyone eating, on average, one fewer portion of fruit or vegetables each week.

The consumption of nuts and legumes – including peas, lentils and beans – could decrease by seven per cent.

People would have up to a portion of dairy less per week, fewer overall calories, and half a portion less of red meat, of which half is imported from overseas.

Unhealthy diets are the second biggest disease risk in the UK, the researchers said, with only tobacco causing more health problems.

The effects would be approximately halved by a ‘soft Brexit’ – in which the UK would likely stay in the European Single Market, they added.

And while there might be health benefits to people eating less red meat and consuming fewer calories, a cutback in fruit and vegetables would be harmful enough to outweigh this. 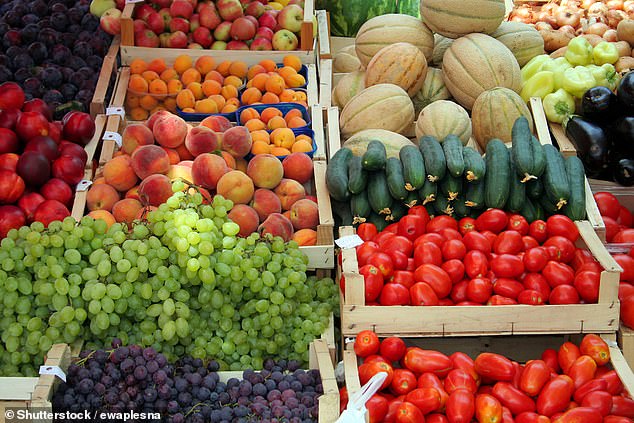 Fruit and vegetables are expected to become more expensive after Brexit, which could mean people eat fewer of them and are more likely to get preventable diseases like cancer and heart disease

Britain’s main supplier of insulin is stockpiling the medicine in case Brexit disrupts the supply chain.

Around 4.6 million people in the country are thought to have diabetes and many of them rely on insulin to stay healthy.

Danish healthcare company Novo Nordisk supplies more than half of the UK’s insulin and has revealed it’s importing enough of the vital medication to last four months.

Medical experts have warned millions of diabetics’ health would be at risk if there was an insulin shortage after Brexit.

Novo Nordisk is stockpiling amid fears Britain will leave the European Union without new trade deals in March, which could make it difficult to import drugs.

The company will build up a 16-week reserve of insulin in the UK before January next year.

The company said it is committed to making sure its patients’ health is not affected by Brexit.

He wrote: ‘The Brexit bill for health adds to the impact that leaving the EU is expected to have on other sectors which will also face higher costs of trade and production.

‘Given the UK’s import dependence, in particular for fruit and vegetables, any Brexit-related increase in trade costs will make it harder to get hold of foods that are critical components of healthy diets and chronic-disease prevention.

‘Whatever form Brexit might take, our analysis suggests that it will significantly impact the British food system and negatively affect the health and welfare of British citizens.’

The scientists worked out the possible impact of Brexit by comparing forecasts for changes to the food chain with how dietary changes are known affect disease risk.

In a hard Brexit scenario in which the UK has to use World Trade Organisation rules, the researchers say tariffs of between 32 and 51 per cent could have to be paid on foods like sugar and meat.

This was split among the population then compared with existing data from the Global Burden of Disease Study.

The report, the most in-depth study of global mortality rates ever conducted, found last year that poor diets are linked to one in five deaths worldwide.

The findings, by Dr Springmann and Dr Freund, have not appeared in a scientific journal.

In response to the findings, Mr Jessop told MailOnline evidence that prices will go up in the wake of Brexit are being ‘pretty flimsy’ and revealed it would be unlikely to do so.

Supermarket giants in August warned a no-deal Brexit would force up the price of a weekly food shop by 12 per cent.

Executives said the biggest tariffs on EU imports would include cheese, up by 44 per cent, beef, 40 per cent, and chicken, 20 per cent.

Britain’s deadline to leave the EU is March 2019, however fears have mounted in recent weeks that it will crash out of the bloc without a deal.

If the EU and Britain fail to reach terms, it could scupper plans of a 21-month transition period after officially leaving the bloc.