By Ian Drury and John Stevens for the Daily Mail

A No Deal Brexit will mean freedom of movement is ended instantly, the Government vowed yesterday.

Rules giving EU citizens the right to enter the UK to live, work or study will be scrapped on October 31.

Stricter rules will be introduced to make it easier to keep out EU criminals, extremists or other troublemakers from coming into the country, Downing Street said.

Theresa May had looked at extending freedom of movement to 2021 or allowing EU citizens and their families – plus those from Switzerland, Norway, Iceland and Liechtenstein – to stay for three months before applying to remain for up to three years.

The Prime Minister Boris Johnson (pictured) has insisted he is committed to honouring the referendum result by ending free movement, a key reason the country voted for Brexit in June 2016

But it is understood Boris Johnson has dropped these options.

The Prime Minister has insisted he is committed to honouring the referendum result by ending free movement, a key reason the country voted for Brexit in June 2016.

If negotiations with the EU collapse and the UK leaves without a deal, freedom of movement – which also gives Britons the right to live and travel freely within the EU – will end overnight on Halloween.

EU citizens with the right to permanent residence will not be affected.

Mr Johnson said that while the number of foreigners arriving would be ‘democratically controlled’, the UK would not ‘become hostile to immigration’. 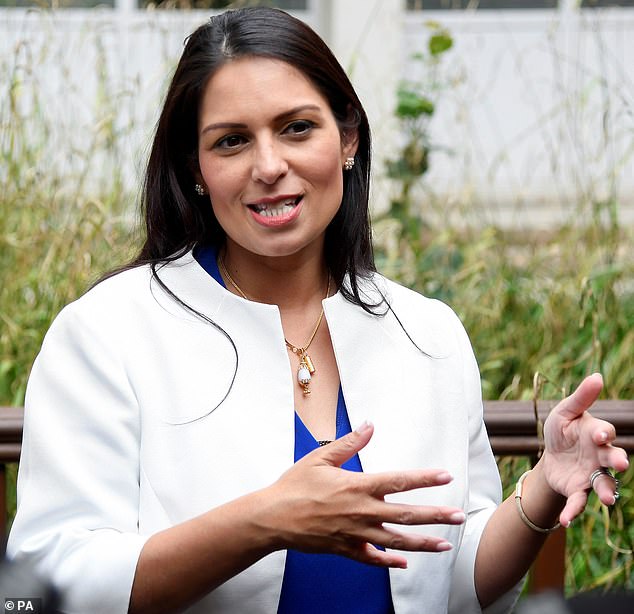 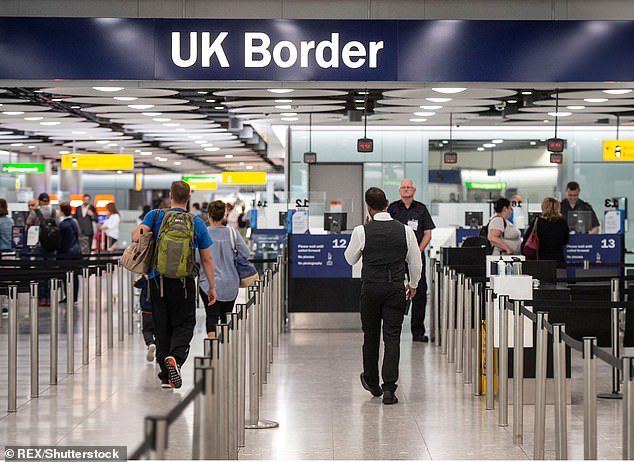 No 10 and Home Secretary Priti Patel are now developing details of a new scheme.

Officials have warned ministers a new system would be impossible to enforce and could leave the UK facing another Windrush-style scandal, which saw immigrants who arrived between 1948 and 1970 wrongly deported back to the Caribbean.

He told Radio 4: ‘This is increasing uncertainty for all employers and could be highly damaging for people using the NHS or depending on the services of a business that has EU workers.’

Voters would prefer a No Deal Brexit than for Jeremy Corbyn to become prime minister and hold a second referendum, a survey has revealed.

Some 48 per cent of people said they would rather the country left the EU without an agreement than for the Labour leader to get into Downing Street.

Just over a third (35 per cent) would rather Mr Corbyn became Prime Minister and held a second referendum.

The remaining 17 per cent of respondents in the YouGov survey of 2,000 people did not give a preference.

The 3 Million group, which campaigns for the rights of EU citizens in the UK, said in a statement: ‘The idea of ending freedom of movement abruptly on October 31 in case of No Deal is reckless politics.

‘Millions of lawful citizens will have their legal status removed overnight.’

Government sources admitted the new system ‘may not look very different’ straight away because the Brexit deadline is looming.

One said: ‘I don’t think anyone is leaning very heavily into idea there will be spanking new system in place. What we are going to do is much tougher than EU criminality thresholds.’

The Prime Minister has postponed introducing immigration legislation amid concerns it would be hijacked by pro-Remain MPs in a bid to thwart leaving the EU.

A Downing Street spokesman said: ‘Freedom of movement as it currently stands will end on October 31 when the UK leaves the EU.

‘So for example we will introduce, immediately, much tougher criminality rules for people entering the UK.’