MPs’ holiday was cancelled to deal with the Brexit crisis today as Theresa May scrambles to find a way through bitter deadlock.

Commons Leader Andrea Leadsom declared that the half-term break next month was being abandoned to make ‘progress’ on passing key laws.

She apologised to MPs for keeping them away from constituency work – but critics joked that the announcement had gone down like a ‘bucket of sick’ as many had already booked skiing trips.

The news came as Foreign Secretary Jeremy Hunt publicly admitted that the UK’s departure date might have to be delayed even if Mrs May somehow manages to win approval for a deal.

Meanwhile, Business Secretary Greg Clark heaped pressure on Mrs May by hinting at a Remainer exodus from the Cabinet if she does not rule out a no-deal Brexit within the next fortnight.

Several senior figures including Mr Clark, Amber Rudd and David Gauke have been pushing for no deal to be taken off the table.

They held off quitting to support a rebel amendment this week, which would have paved the way for a Brexit delay, after being assured there would be another chance to change course.

But asked if he would join a revolt if there has been no progress by the next votes, due on February 14, Mr Clark told ITV’s Peston show: ‘I’ve always been very clear.. that to leave in a disorderly way on 29 March would be very bad for everyone in the economy. And I will do everything I can to make sure that doesn’t happen.

‘That’s the purpose of having a position of influence in government, to be able to do that.’ 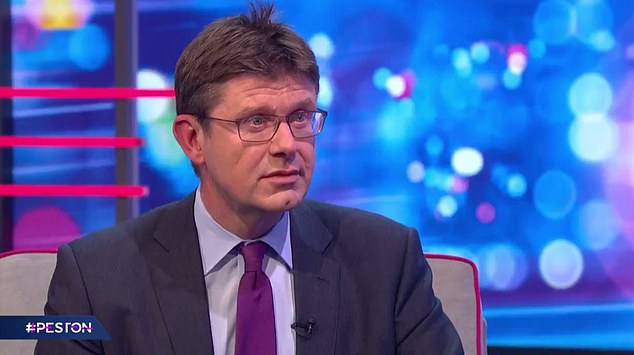 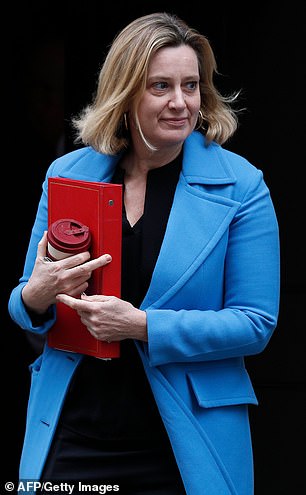 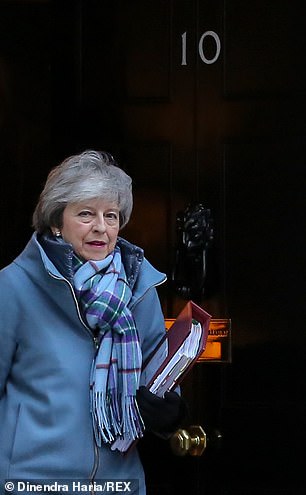 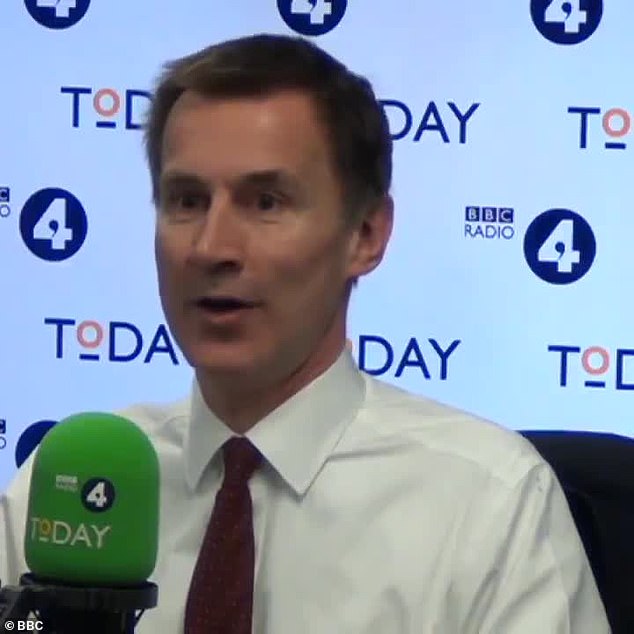 The warning effectively gives Mrs May a fortnight to get concessions from the EU that can get her deal past the Commons.

It emerged today that ministers are preparing to offer funding to Labour MPs with Leave-voting constituencies who might be willing to support the Brexit plan.

Mrs May hailed her new ‘mandate’ to negotiate a new Irish border backstop with the EU after emerging victorious in a series of crunch votes on Tuesday.

But so far she has been met with a wall of rejection from the bloc’s leaders, who insist the Withdrawal Agreement cannot be reopened.

In a telephone call last night, Irish Premier Leo Varadkar told her recent events only underlined the need for a backstop that was ‘legally robust and workable in practice’.

The PM also spoke to European Council president Donald Tusk in what was described as an ‘open and frank’ conversation.

Afterwards, he tweeted: ‘The EU position is clear and consistent. The Withdrawal Agreement is not open for renegotiation.’ 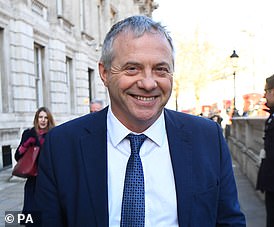 Theresa May is preparing to pump millions of pounds into the constituencies of Labour MPs as she scrambles to win support for her Brexit deal.

The cash for deprived Leave-backing areas is designed to entice wavering Opposition politicians to get on board with the PM’s plan.

Fresh commitments to protect workers’ rights are also being mooted as the clock runs down towards the UK’s departure date.

The ‘pork barrel’ tactic is effectively an admission that Mrs May cannot get a package through Parliament with just Tory and DUP votes.

The move – hailed by Labour MPs who urged the PM to ‘show us the money’ – comes amid increasingly frantic efforts to forge a cross-party consensus.

There is speculation that Jeremy Corbyn could be softening his position, after years of demanding a full customs union and the ‘exact same benefits’ as current membership terms. He pointedly refused to sack shadow ministers who defied orders and helped the government during crunch Commons votes on Tuesday.

Labour MP Lisa Nandy, whose Wigan constituency voted 64 per cent to Leave in 2016, insisted her party now had to ‘make real choices’ and ‘respect the result of the referendum’.

Mrs May is due to report back to Parliament on her negotiations with the EU on February 13, with a further series of votes by MPs expected the following day.

But the prospects of there being enough time to pass key legislation to implement a Brexit date have been dwindling.

Mr Hunt told Radio 4’s Today programme: ‘I think it is true that if we ended up approving a deal in the days before 29 March then we might need some extra time to pass critical legislation, but if we are able to make progress sooner then that might not be necessary.

‘We can’t know at this stage exactly which of those scenarios would happen.’

Underlining the time pressure, Mrs Leadsom confirmed that the 10-day recess due in mid-February was being dropped.

‘I am very sorry for the inconvenience this will cause to colleagues, House staff and their families,’ she said.

‘Where House staff are concerned, conversations are underway to ensure that disruption is limited and no one is out of pocket. And where members have family, ministerial or constituency commitments, the usual channels (party whips) will work hard with members to limit the inconvenience.’

Mrs May’s strategy secured a rare show of unity from the warring wings of the Conservative Party – as well as her allies in the DUP – in the Commons on Tuesday.

However, Mr Clark suggested she needed to find an agreement that could command broader support across the House if it was to survive.

‘Not only do I think it is necessary for people to come together across partisan lines, if we are properly to move forward I don’t think we should aim for this deal to pass by a majority of one or two. I would like to a substantial majority for a deal,’ he told ITV’s Peston programme.

While the Government remained committed to securing an independent trade policy, he said it was right to listen to other views – including calls for a customs union.

‘I think it is reasonable going into discussions to listen to people’s views and to see where the majority is in the House of Commons – and for a substantial majority.

‘I would want to see what proposals are there. I have always thought when you have a 52-48 result in the referendum you have to have a deal that respects the fact that it was close, tries to bring the country together.’ 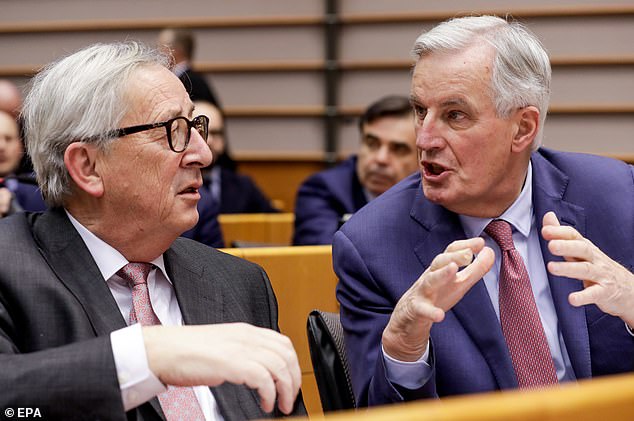 Mrs May has so far met a wall of resistance from the EU, including Jean-Claude Juncker (left) and Michel Barnier (right) to her renegotiation bid

Mr Clark also risked infuriating Brexiteers by playing down a ‘Plan C’ proposal thrashed out with some Remainers, which would involve trying to negotiate a looser Irish backstop based on technological fixes, and if that was not possible asking for a three-year transition period to get other trade arrangements in place.

‘I don’t see that currently being available. I can’t see that those technical possibilities are there yet,’ he said.

His comments came after Mrs May met privately with Labour leader Jeremy Corbyn to discuss the way forward on Brexit.

In a further attempt to build cross-party support, Mr Clark – who has been holding talks with union leaders – suggested the Government could legislate to protect workers’ rights after Britain has left the EU.

‘The unions have some concerns that the deal that has been negotiated would somehow involve workers’ rights being diluted in this country. That is the opposite of our intention,’ he said.

‘Given that is the opposite of the intention, it seems to me common sense would say let’s turn that intention into legal text – legislation.’

The Prime Minister is preparing to woo rebel Labour MPs into supporting her deal with an injection of cash into deprived areas which voted Leave in the 2016 referendum, including former mining communities.