The Brexit Party’s logo cleverly guides voters towards it on a ballot paper, a British designer has said.

The symbol of Nigel Farage’s movement is a forward-pointing arrow with the party’s name written inside.

On a ballot paper, the arrow appears to point towards the box where Brexit Party voters would draw a cross.

Designer Ben Terrett said it was a ‘very clever piece of graphic design’.

On this postal ballot paper the Brexit Party logo appears to guide voters to mark their cross next to Nigel Farage’s party. A British designer said it was a ‘very clever piece of design’

He said: ‘I hate Brexit. I hate Farage even more. I just voted in the Euro elections (postal) and here’s a thing: It’s a massive arrow pointing at the box where you mark your X with the word BREXIT written in big font.

‘That’s going to get a lot of Xs. A helluva lot of Xs. They are a single issue, probably single election party, and this is a very clever piece of graphic design.’

He also contrasted it with the Change UK logo which has been widely ridiculed.

The breakaway group’s emblem features four horizontal bars, with the party’s name on the right – although the layout of those words has been altered.

An earlier version of the Change UK logo was rejected by the Electoral Commission last month. 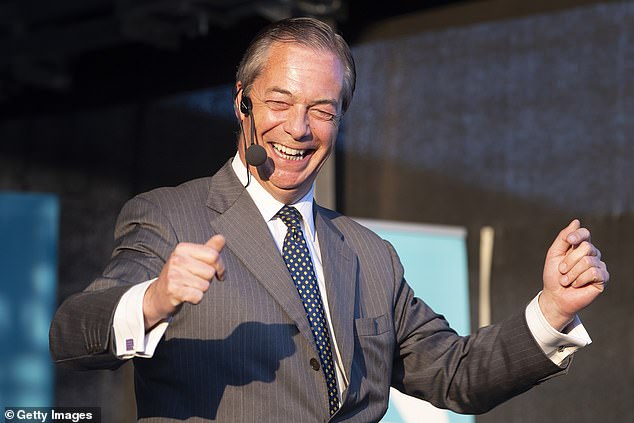 That symbol showed the letters TIG for The Independent Group with #Change underneath.

But the Electoral Commission said it was ‘likely to mislead voters’ and queried the use of an online hashtag.

The party also faced a row over its name as petition group Change.org suggested the rebel Tory and Labour MPs had chosen a title too similar to theirs.

Polls have shown Mr Farage’s party with a strong chance of victory in the May 23 European elections.

Some surveys have shown the Conservatives falling as low as fifth amid voter fury over the protracted Brexit process.

The elections were never supposed to happen at all but the Brexit delay until October 31 has forced Britain to take part in the continent-wide poll.

Change UK has made less of an impact, ranging between one and seven per cent in recent polls.

The party faced a further blow when its lead candidate in Scotland dropped out and backed the Liberal Democrats.

David Macdonald said a ‘diluted’ Remain vote could give Nigel Farage’s Brexit Party the chance to get an MEP in Scotland.