Brexit saga hits the housing market as Bank of England warns prices will fall by 1.25% this year

The Bank of England now expects property prices to fall by 1.25 per cent this year, after predicting a 0.25 per cent annual increase in February.

In its latest inflation report, the Bank said property price growth had been weak since the 2016 EU referendum, adding that ‘Brexit-related uncertainties’, as well as other factors, had taken their toll on house prices.

Amid such uncertainty, and given the hefty costs involved in moving home, some buyers and sellers are ‘likely to have delayed’ taking their next step on the property ladder, the Bank added.

Heading for a fall: House price inflation has been slowing, the Bank of England said

On top of the Brexit saga, affordability constraints continue to hamper the housing market’s vitality.

The slowing in house price inflation has been most pronounced in areas with higher pre-referendum prices relative to incomes, such as London and the South East.

Stamp duty hikes on second homes and lower mortgage interest rate tax relief have also hit demand within the housing market, the Bank warned. Buy-to-let mortgage completions were around 40 per cent lower last year than in 2015.

While buyer demand appears to be dwindling, an increase in house-building in certain parts of the country may have also ‘weighed on prices’.

Summing up the situation, the Bank said house-building levels have held up since the EU referendum, and in the year to April 2018, 222,000 dwellings were added to the housing stock in England, which is just shy of the record high of 224,000 in 2008.

In some parts of the UK, namely southern England, an excess supply of housing has led to a widening gap between asking and offered prices, the Bank said. 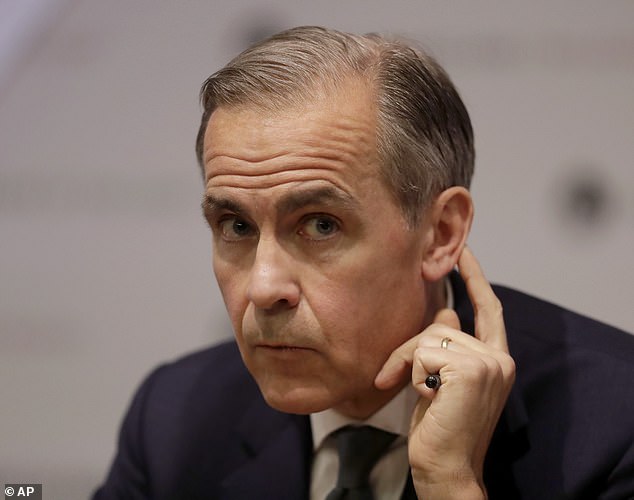 What should prospective buyers do?

Speaking to This is Money, buyer agent Henry Pryor claims buyers should not be put off by the Bank’s latest forecast.

He said: ‘It seems that the Bank expects prices to slide but not to crash so provided prospective buyers take account of this there is no good reason for them to hold back.

‘Sellers will have their backs to the wall so canny buyers should be able to drive a hard bargain.

‘Be prepared, be ready to walk away from anything but the best deal and 2019 may turn out to be a year that many laid down the foundations of their future property fortunes.’

Lucy Pendleton, founder director of James Pendleton estate agents, said: ‘The outlook for house prices has dropped off a cliff in a pretty dramatic fashion over the past quarter.

‘An about-turn on this scale will cause a few worry lines but, if proved correct, this kind of price action will at least get the market moving.

‘As a country, we’ve been labouring under a slump in transactions that has exacerbated affordability problems in many areas as lack of demand has kept prices artificially high.

‘What the UK needs is for transaction levels to return to pre-crisis levels because that’s what will impose fair value on more of the markets that have been seizing up over the last few years.

‘The regions have also been seeing incredibly strong performances lately even while prices in London have been falling. The capital normally leads the way so, if these forecasts are borne out, this is the rest of the country playing catch up as it has always tended to do.

‘In the long run a correction in prices is probably the medicine our housing market needs.’ 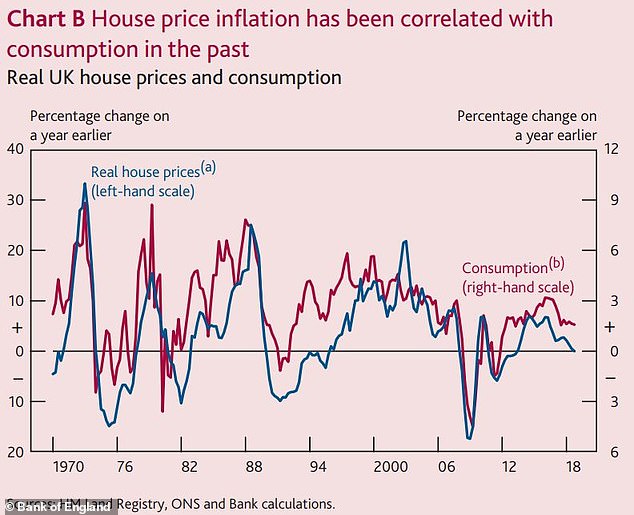 Property and consumption: House price inflation has been correlated with consumption in the past 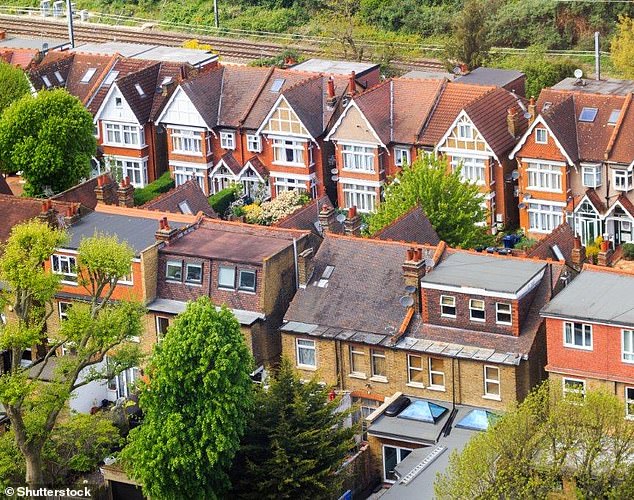 Looking beyond this year, the Bank said house price inflation looked set to pick up, as ‘headwinds from uncertainty dissipate and stronger income growth supports the demand for housing.’

That said, the Bank remained cautiously vague about its latest forecasts. It said: ‘There are of course risks around these forecasts.

‘On the one hand, more persistent uncertainty could weigh on house prices, and housing investment could fall by more than projected ahead of the withdrawal of the Help to Buy scheme.

‘On the other hand, a more rapid dissipation of uncertainty could lead to a stronger pickup in house price inflation and housing investment growth.’

Last month, the Office for National Statistics said the average cost of a home was £226,000 in February, which is £1,000 higher than the same period a year ago.

This afternoon, the Bank’s Monetary Policy Committee, led by Mark Carney, voted unanimously to keep interest rates on hold at 0.75 per cent. While this spells good news for mortgage-holders, the decision leaves savers firmly in the doldrums once again.

The Bank hiked its growth forecast for this year to 1.5 per cent, up from the 1.2 per cent it had pencilled in in its February report.