Brexit talks deadline: May ‘gives Jeremy Corbyn a week to agree a deal or she will pull the plug’

Brexit talks deadline: May ‘gives Jeremy Corbyn a week to agree a deal or she will pull the plug’

By David Wilcock, Whitehall Correspondent and Martin Robinson Chief Reporter For Mailonline and Jack Doyle for the Daily Mail

Crunch talks between Labour and the Government over a possible way out of the Brexit quagmire look set to finally come to a head next week – with or without an agreement.

Discussions between rival teams of senior ministers and officials have been talking place for weeks, with little sign of a breakthrough cross-party deal that would be backed by MPs on both sides.

Talks on Monday between the two sides, led by Chancellor Philip Hammond and his shadow counterpart John McDonnell are understood to have been better than in previous weeks.

But they are thought to remain some way from an agreement.

Another option is that the two sides – if they cannot come to a deal – agree on a series of ‘indicative votes’ by MPs that shapes the form Brexit finally would take.

It’s understood that the Cabinet was informed of the latest developments at its weekly meeting this morning, with a general feeling that the process needed to come to a conclusion next week.

The country already looks almost certain to take part in European elections in May but the Government hopes to leave before the end of June.

This would stop any MEPs from taking their seats in Brussels, because the European Parliament does not sit until July 2. 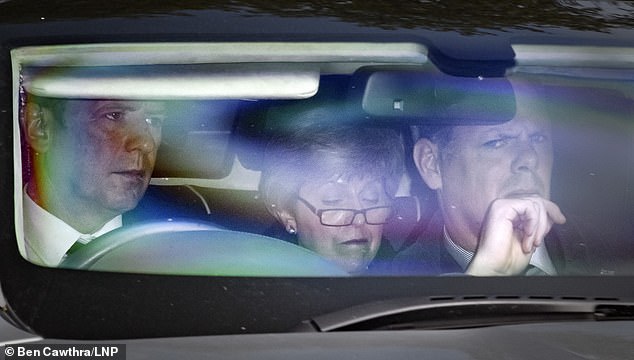 Mrs May chaired the regular Cabinet meeting of ministers today, where they discussed the progress of ongoing talks with Labour

Jeremy Hunt today warned Theresa May a deal with Labour would be a mistake – but urged her not to quit until Brexit is delivered.

The Foreign Secretary, who is touring Africa on a trip seen as the launch of his leadership campaign, suggested he hopes talks with Jeremy Corbyn fail if it leads to the softest possible Brexit, calling it ‘bad policy’.

Speaking to the Daily Mail on his five-day trip, Mr Hunt said it was ‘very difficult to imagine a Rose Garden moment’ – a reference to the 2010 coalition agreement between the Tories and Lib Dems.

He said Labour were much more divided on Brexit than the Tories, raising the question of whether Jeremy Corbyn was ‘serious about delivering Brexit’.

He said: ‘There is always a danger of doing a deal with Labour that you lose more Conservative MPs than you gain Labour MPs, but I think the essential question is whether Labour are serious about delivering Brexit’.

At the weekend Labour accused the Government of still refusing to ‘move on any of their red lines’ in the cross-party talks on getting a Brexit deal.

Shadow business secretary Rebecca Long-Bailey also hit back at claims from the Conservatives that her side has been stalling, saying ‘we’re certainly not dragging our heels’.

She told Sky News’ Sophy Ridge on Sunday: ‘Honestly I think the discussions so far have been productive, they’ve gone into a lot of detail, there seems to be a willingness on both sides to move towards some form of consensus.

‘But as yet we haven’t seen the Government move on any of their red lines, we’re having further discussions this week and hopefully we’ll see some movement.’