Lord Ricketts, the ex-ambassador to France, said that the election of the Democrat to replace Donald Trump would leave the UK as an ‘outlier’, with the White House’s European focus on Paris and Berlin instead

Brexit Britain faces being sidelined in favour of continental Europe if Joe Biden wins the US presidential election next week, a former top diplomat has said.

Lord Ricketts, the ex-ambassador to France, said that the election of the Democrat to replace Donald Trump would leave the UK as an ‘outlier’, with the White House’s European focus on Paris and Berlin instead.

The crossbench peer, a staunch critic of Boris Johnson, spoke out with less than a week to go until the November 3 election, with Mr Biden leading incumbent Mr Trump – one of the biggest champions of a Transatlantic trade deal – in the polls.

The former vice president has already warned Boris Johnson against damaging peace in Northern Ireland via his attempts to complete Brexit.

It comes amid claims that senior EU figures believe the Prime Minister is holding off to see whether Mr Trump wins the US election before sealing a post-Brexit trade deal with Brussels.

Lord Ricketts said the UK ‘has put itself out of an influential position in Europe’, because of Brexit, which would have consequences.

‘When Biden looks towards Europe, he will see Paris and Berlin more as the center of gravity of what’s really important for America in Europe, both economically and in security terms, and Britain will be seen rather as an outlier, rather outside the mainstream of Europe,’ Lord Ricketts told Politico.

‘There will continue to be an important bilateral relationship on defense and security of course, but in other areas, Britain will not have the same prominence it has been used to having in Washington because, frankly, Britain is less useful to the US administration.’ 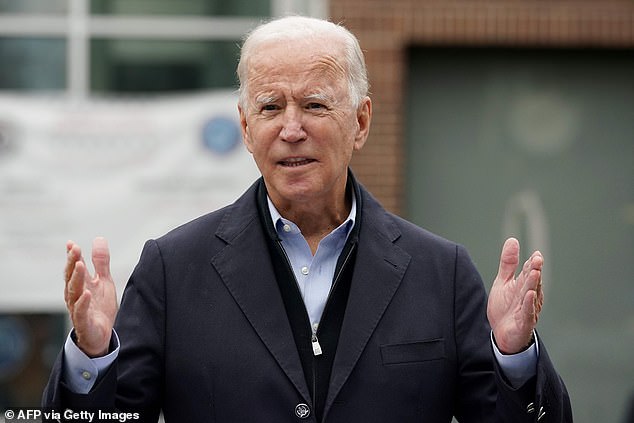 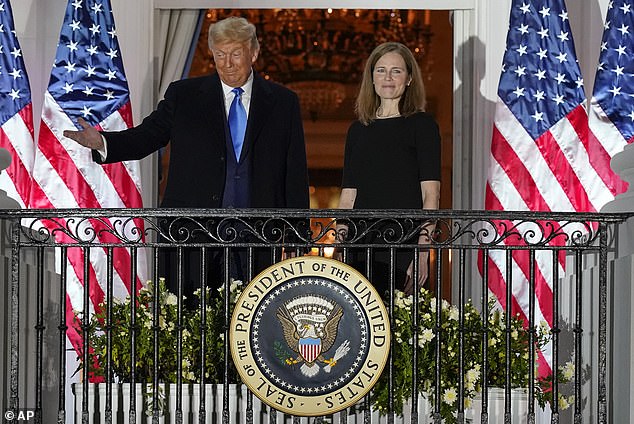 ‘The Biden administration would be very careful, very prudent about how to deal with this Brexit Britain,’ he added.

Lord Ricketts was ambassador to France between 2012 and 2016, having previously acted as David Cameron’s national security advisor and head of the diplomatic service.

With just a week to go until the election, the two US presidential candidates will criss-cross the country on Tuesday in an intense day of campaigning that will also see former president Barack Obama back on the stump.

Trailing Mr Biden in national opinion polls, Mr Trump will hold rallies in three states key to his re-election hopes – Michigan, Wisconsin and Nebraska – while his opponent journeys to Georgia and Mr Obama campaigns on his behalf in critical Florida.

The Internal Market Bill (IMB) would allow the Government to unpick sections relating to Northern Ireland’s status after the end of the year. 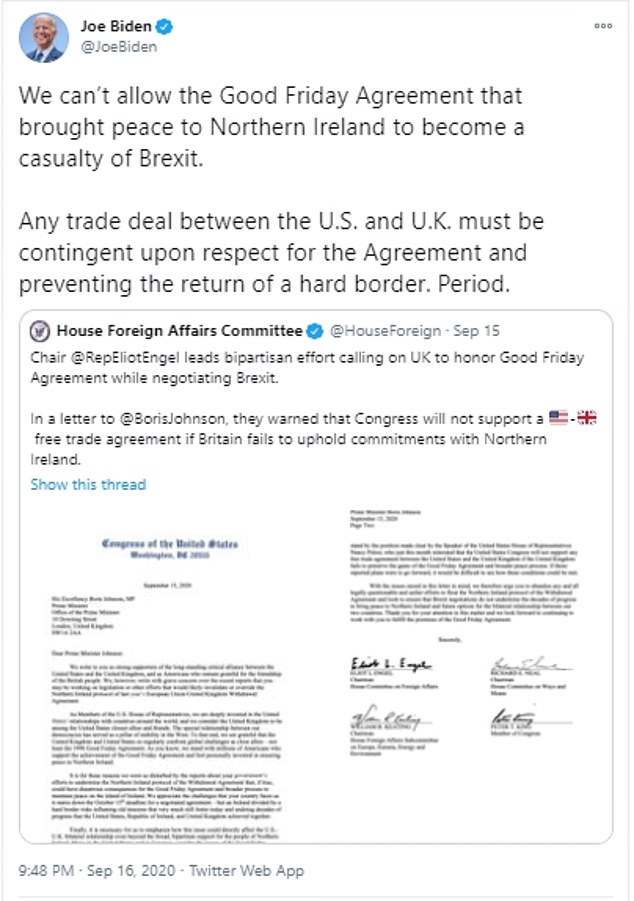 But in his first direct intervention on the matter since becoming the Democrat challenger to Donald Trump, Mr Biden warned that the move – which would breach international law if enacted, would threaten the UK-US trade deal currently being negotiated.

The deal has to be ratified by the US Congress and Democrats who control the lower House of Representatives have already threatened to halt its progress.

Mr Biden tweeted: ‘We can’t allow the Good Friday Agreement that brought peace to Northern Ireland to become a casualty of Brexit. Any trade deal between the US and UK must be contingent upon respect for the Agreement and preventing the return of a hard border. Period.’

At the weekend, the UK’s former permanent representative to the EU, Sir Ivan Rogers, said Mr Johnson appears to be waiting for the US election outcome before settling an agreement with Brussels.

Sir Ivan, a long-term critic of Britain’s Brexit tactics who served in the role from 2013 to 2017, told the Observer that European capitals think the premier will be more likely to opt for No Deal if Mr Trump pulls off a shock victory.

He said: ‘Several very senior sources in capitals have told me they believe Johnson will await clarity on the presidential election result before finally deciding whether to jump to ‘no deal’ with the EU, or to conclude that this is just too risky with Biden heading for the White House, and hence live with some highly suboptimal (for Johnson) skinny free trade agreement.’