Furious Brexiteers accused Brussels of trying to ‘annex’ Northern Ireland today as Theresa May made clear she will not cave to EU demands.

Former minister David Jones said the EU was putting forward a ‘fantasy’ plan to keep control of Northern Ireland that would never be acceptable to the British people.

The flaming row erupted after a draft emerged of a ‘legal text’ prepared by Brussels based on December’s political agreement.

The document brands the idea of a ‘common regulatory area’ the ‘default’ option in the event no deal can be agreed by the UK and EU.

The UK’s preferred options for an open border controlled under a free trade agreement and using technology will not be set out in the draft treaty, due to be published by Michel Barnier (pictured) later today

The controversial idea implies that Northern Ireland will effectively stay inside the EU Single Market – and was flatly rejected by Downing Street sources who insisted the PM would not “sign up to anything that threatens the constitutional integrity of the UK or its common market”.

Mr Jones, a former Brexit minister, said this morning that Brussels seemed to think it could simply ‘annex’ Northern Ireland. ‘That is what it would amount to,’ he said.

The UK’s preferred options for an open border controlled under a free trade agreement and using technology will not be set out in the draft treaty, due to be published by Michel Barnier later today.

Brussels deems they have not been spelled out in enough detail by UK ministers.

The incendiary row comes after a leaked Cabinet letter written by Boris Johnson suggested he had questioned the importance of the Irish border issue.

In the letter Mr Johnson raised the prospect of a harder border between Northern Ireland and the Republic if other solutions failed.

Mrs May has repeatedly insisted she will not accept a hard border involving inspection posts and checkpoints, following warnings this could undermine the Northern Ireland peace process.

But in the letter, Mr Johnson wrote that it was wrong to see the task as maintaining ‘no border’ on the island of Ireland after Brexit, saying the Government’s task was to ‘stop this border becoming significantly harder’. 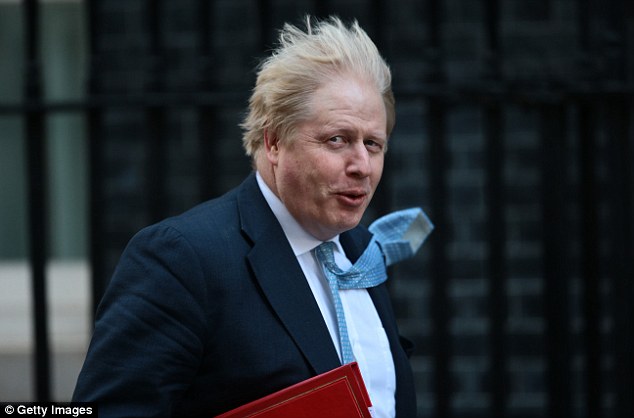 In a leaked letter to Theresa May, Boris Johnson suggested he would be willing to accept a so-called ‘hard border’ between Northern Ireland and the Republic if other solutions failed