Brian May has revealed he was rushed to hospital after suffering a heart attack.

The Queen guitarist was recovering from a ripped muscle and trapped nerve as a result of a gardening injury, when he suffered a heart attack amid his recovery.

The rocker, 72, released an Instagram video on Monday, in which he explained the shocking series of events that lead to his hospitalisation.

Shocking: Brian May has revealed he was rushed to hospital after suffering a heart attack earlier in the month, despite being generally fit and healthy

Brian, who has now made a full recovery, began the clip by stating: ‘I told you I had a ripped muscle and that was the way I was diagnosed and we thought it was like a bizarre gardening accident… I kind of forgot anything to do with the bum people find amusing… but anyway, it turned out to be not really the case.’

He went on to reveal that after being diagnosed with a rip in his gluteus maximus, he was confused to find that a week later he was still in pain.

He explained: ‘I mean real agony. I wanted to jump at some points. I could not believe the pain. And people are saying “that’s not like a ripped muscle”, so eventually I had another MRI.’ 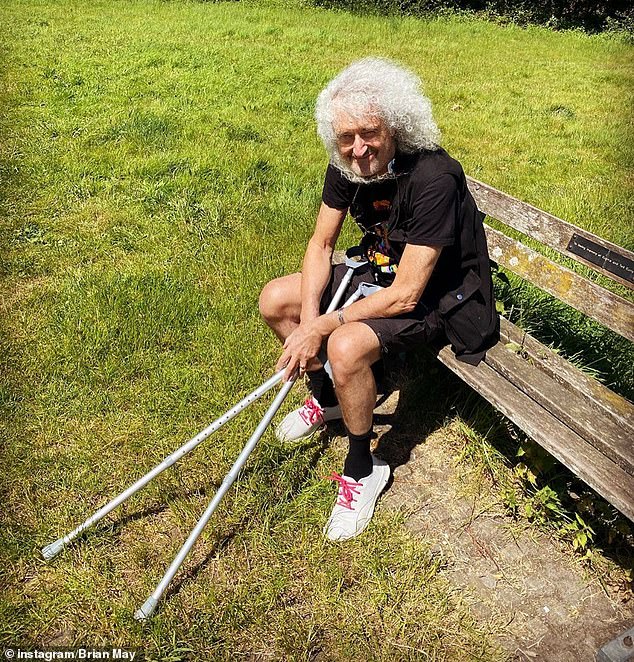 Recovering: The Queen guitarist was recovering from a ripped muscle and trapped nerve as a result of a gardening injury, when he suffered a heart attack amid his recovery

The results showed that Brian had a compressed sciatic nerve, which he noted ‘felt like someone had been putting a screwdriver in my back the entire time. It was excruciating….’

However, in the middle of receiving treatment for his trapped nerve and ripped muscle, Brian suffered another medical emergency.

He explained: ‘So that’s one side of the story, and I’m a lot better now. I’m free of that terrible pain that actually destroys your mind…

‘But the rest of the story is a little more bizarre. I was shocked, I thought I was a healthy guy. Everyone says I’ve got a great blood pressure and I keep fit, I bike, good diet.

‘I had – in the middle of the whole saga of the painful backside – I had a small heart attack. I say small, it’s not something that did me any harm. It was about 40 minutes of pain in the chest and tightness. It’s that feeling in the arms and sweating.

‘And you kind of know, you’ve heard things and you think “this is a heart attack”. To cut a long story short, my wonderful doctor drove me to the hospital himself and I had an angiogram [an X-ray used to examine blood vessels.]’ 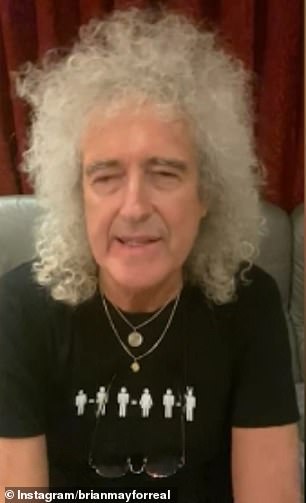 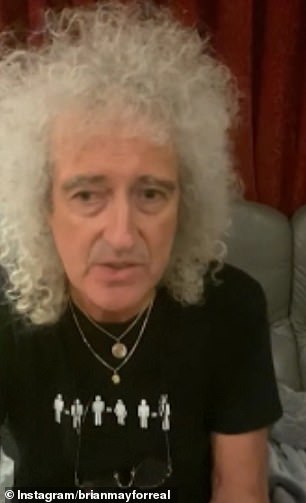 Hospitalised: The rocker, 72, released an Instagram video on Monday, in which he explained the shocking series of events that lead to his hospitalisation 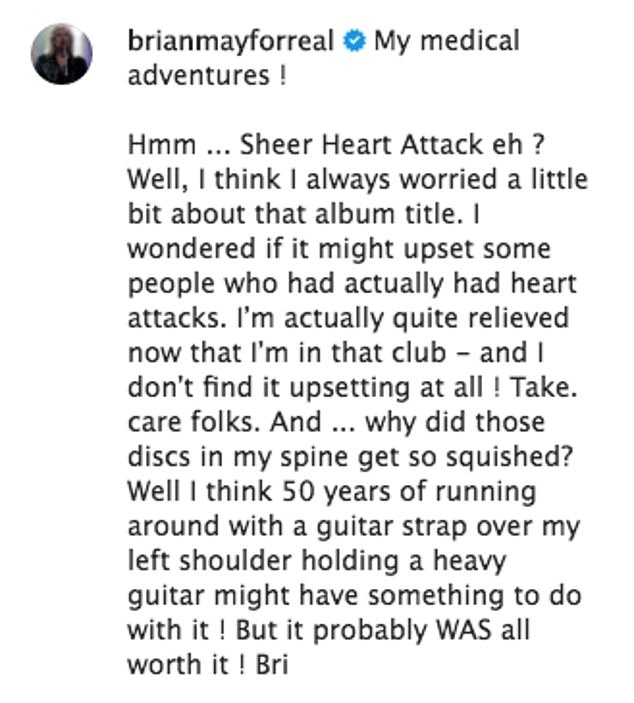 Brian went on to reveal that doctors discovered he had three arteries congested and he was in danger of blocking the supply of blood to his heart.

Doctors suggested that he undergo open heart surgery, but Brian opted for the alternative which was to have three stents put inside his heart.

Still recovering from his ripped muscle and nerve pain made the operation even worse, however, with Brian saying that he ‘ripped out his tubes’ in hospital after being left in such agony.

Following the operation, Brian is recovering well, revealing that he is in no pain from the surgery, stating: ‘I walked out with a heart that is very strong now. So I think I’m in good shape for some time to come…. And if I’m not then I’ll have another  angiogram.’

He continued: ‘Anyway, I didn’t die, I came out, and I would have been full of beans if it weren’t for the leg.

‘I’ve only just got to the point where the leg is liveable.’ 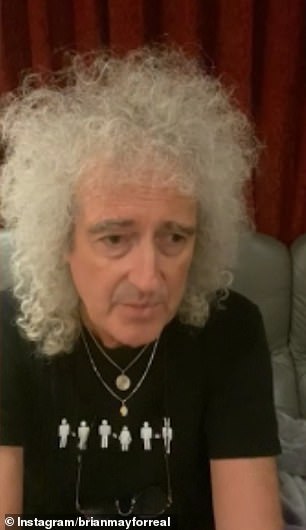 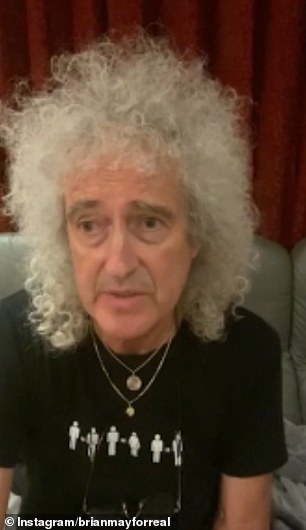 Shocking: Brian went on to reveal that doctors discovered he had three arteries congested and he was in danger of blocking the supply of blood to his heart

Brian went on to encourage his followers to look after their hearts and get them checked as they approach their ‘autumn years’ of life.

He concluded: ‘I’m very grateful that I now have a life to lead again. I was very near death because of this, but the pain that I had was from something very different. It’s funny how these things work.

Brian went on to state that he believes everyone over the age of 60 should have an angiogram to warn them of their risks of having a heart attack, noting that he himself ‘had no idea’ that he was in danger. 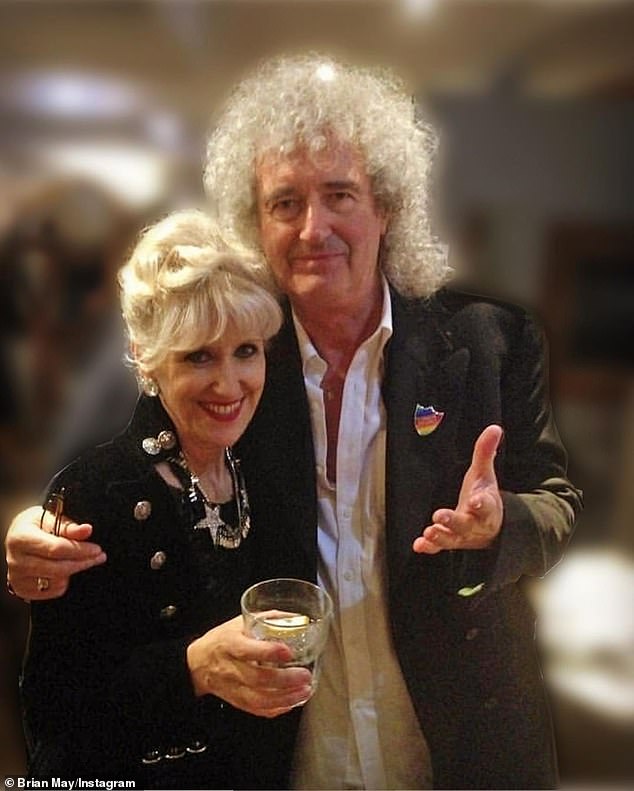 Alongside the video, Brian penned: ‘My medical adventures!

‘Hmm … Sheer Heart Attack eh ? Well, I think I always worried a little bit about that album title. I wondered if it might upset some people who had actually had heart attacks.

‘I’m actually quite relieved now that I’m in that club – and I don’t find it upsetting at all ! Take. care folks.’

WHAT IS A HEART ATTACK?

He continued: ‘And … why did those discs in my spine get so squished? Well I think 50 years of running around with a guitar strap over my left shoulder holding a heavy guitar might have something to do with it ! But it probably WAS all worth it!’ (sic)

Brian, who is married to former EastEnders star Anita Dobson, 71, previously said the nerve pain caused by his gardening injury ‘paralysed my brain’. He said: ‘I felt it took over my personality… I was in a nightmare world.’

Sharing a video update on Saturday, the rocker told his 2.4m Instagram followers:

’I’ve got some great help with pain management and rehabilitation. Today I can sit and potter slowly around holding on to things with almost no pain. It’s incredible what real pain does to you.’

‘I’ve always been a bit of a big shot about my tolerance to pain levels – like not getting Novocaine jabs at the dentist or whatever – But this nerve pain which came to inhabit my body about three weeks ago – no, it wasn’t a glute thing after all – has paralysed my brain.’

‘I felt it took over my personality. I woke up feeling that somehow the pain WAS me, and I was struggling to get back in my body. And I did give in and take the heavy duty painkillers, and in the end I was in a nightmare world.’

‘The only thing to do was kick it all and come out. But I could only do that because I got some great physio help and some osteopathy. I’ll tell you the whole story sometime, but for now … happy weekend.’

Earlier this month Brian broke the news on Instagram that he was in hospital sharing a selfie of him in a surgical mask.

He wrote: ‘I managed to rip my gluteus maximus to shreds in a moment of over-enthusiastic gardening.

‘So suddenly I find myself in a hospital getting scanned to find out exactly how much I’ve damaged myself.

‘Turns out I did a thorough job – this is a couple of days ago – and I won’t be able to walk for a while… or sleep, without a lot of assistance, because the pain is relentless.’

The muscle, the largest in the body, controls hip and thigh movement.

Brian told fans he needs to ‘go dark’ to get ‘complete rest’ and asked for ‘healing silence’ over ‘sympathy’. 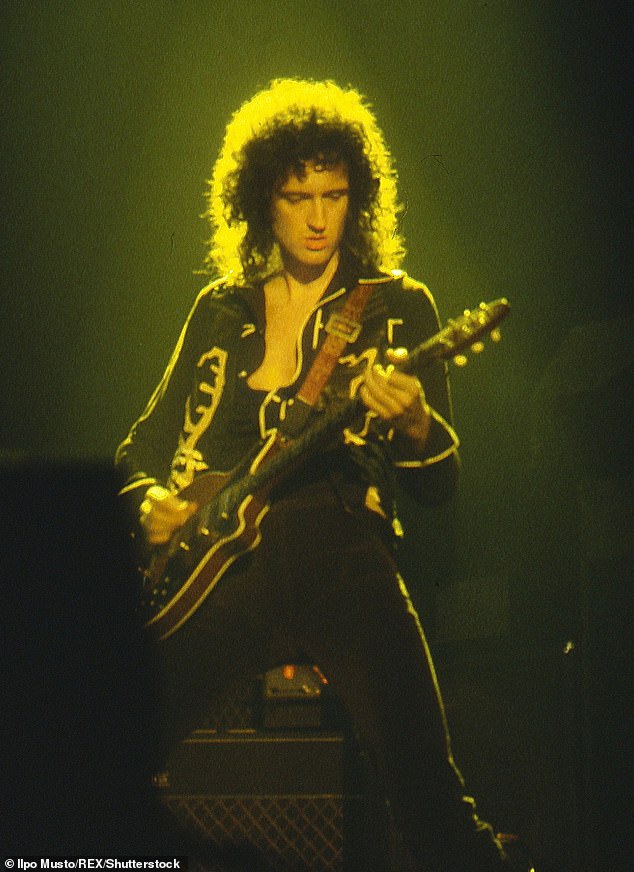 Legendary: Brian May is best known as the guitarist in rock band Queen