A woman has been criticized online after it was revealed that she demanded each of her bridesmaids to stand at exactly the same height on her wedding day.

Shared in a post on Reddit, US-based user wingkingdom – whose friend is a member of the bridal party – detailed the bizarre ordeal that involved the bride demanding each of her eight bridesmaids to stand at exactly 5’10 ‘and a half’ on the big day.

Since the now viral post was shared, users have revealed their shock at the demanding nature of the bride, as many encourage the bridesmaids to ‘drop out’ of the wedding and ditch the bride, who has been branded a bridezilla.

Bizarre! A bride has been criticized online after it was revealed that she demanded each of her eight bridesmaids to be the exact same height on her wedding day (stock image) 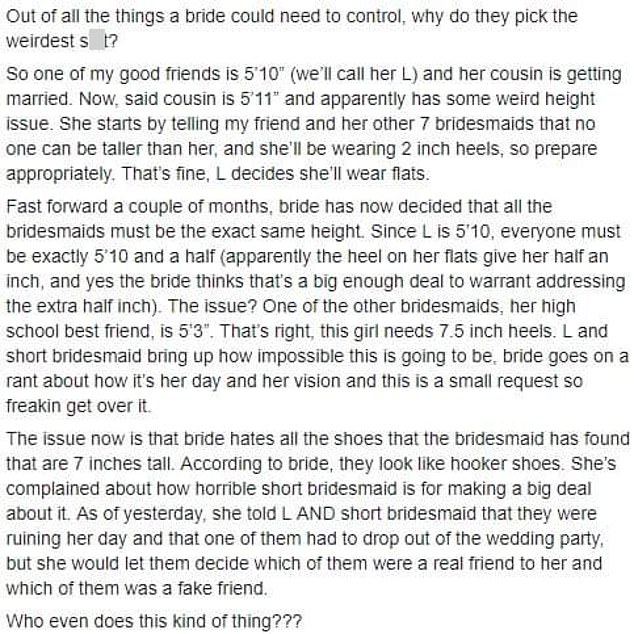 Shocking: A Reddit user detailed the strange ordeal in a post, which was written by a friend of one of the bridesmaids, that has garnered quite a lot of attention online

The Reddit user began the post by stating that one of their good friends, who is 5’10, is a bridesmaid at the bride’s wedding.

Rather than revealing the names of those in the wedding, the user branded their friend ‘L’ in order to remain anonymous.

The user added that the bride – who is their friend’s cousin – herself is 5’11, and has ‘some weird height issue’.

‘She starts by telling my friend and her other seven bridesmaids that no one can be taller than her, and she’ll be wearing two inch heels, so prepare appropriately,’ the post read.

The bride’s rule saw L deciding to wear a pair of flats to the wedding, ensuring that she wouldn’t be taller than the bride.

The post continued: ‘Fast forward a couple of months, bride has now decided that all the bridesmaids must be the exact same height.

‘Since L is 5’10, everyone must be exactly 5’10 and a half (apparently the heel on her flats gave her half an inch, and yes the bride thinks that’s a big enough deal to warrant addressing the extra half inch)’

The user revealed that an issue arose as a result, as one bridesmaid’s height is 5’3.

‘That’s right, this girl needs seven and a half inch heels,’ the Reddit user said.

‘L and short bridesmaid bring up how impossible this is going to be, bride goes on a rant about how it’s her day and her vision and this is a small request so freakin get over it,’ they added.

Criticism: Since the now viral post was shared on Reddit, dozens of users have shamed the bride for her behavior, with many encouraging the bridesmaids to drop out of the wedding

The post detailed that another issue arose after the shorter bridesmaid was ordered to get seven-inch heels, as the bride ‘hates’ all of the shoes she found.

‘According to bride, they look like hooker shoes,’ the user said. ‘She’s complained about how horrible short bridesmaid is for making a big deal about it.

‘As of yesterday, she told L and short bridesmaid that they were ruining her day and that one of them had to drop out of her wedding party, but she would let them decide which one of them were a real friend to her and which one was a fake friend.

‘Who even does this kind of thing?’ the Reddit user, who wrote the now viral post, concluded.

Since the post was shared, it has left over 100 users in shock.

One user commented on the bizarre situation, saying: ‘Both should decline and remove themselves from the wedding party. Such foolishness.’

Another wrote: ‘What does this say about the marriage? I’ve been married 33 years and I don’t think it has anything to do with height of the bridesmaids.’

Several others jokingly encouraged the bridesmaids to turn up to the event wearing ‘stilts’.

‘It would be hysterical if she showed up on stilts,’ one user said, while another responded, writing: ‘Or monster metal platform boots.

‘They have no heel so that they won’t kill your feet, but the sole of the shoe is like a foot tall.’