Bride ends marriage as husband is exposed as a paedophile

A newlywed has described how her marriage lasted just 13 days before she made the shocking discovery her new husband was a paedophile.

Mother-of-seven Lisa Gray, 35, had no idea about her new husband’s secret life until police turned up to raid the family home.

Detectives had been tipped off about John Gray after finding out he had been bragging about sexually abusing children during an online chat with another woman. 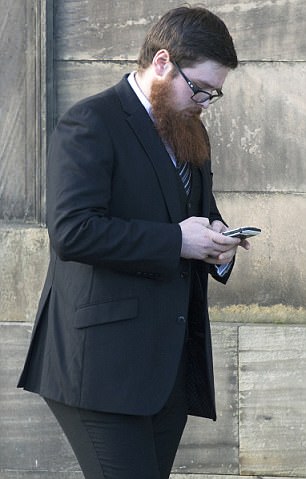 Lisa Gray (left), 35, of Perth, Scotland, discovered that her husband John Gray (right), 25, had been boasting online about abusing children three weeks before their wedding

Mrs Gray gave evidence against her husband and revealed that they had spent less than a fortnight together as man and wife before he was arrested.

She told Perth Sheriff Court that she became involved in a relationship with Gray after meeting him through work and they decided to wed during 2016.

‘We got married on October 22, 2016. He was arrested on November 3 and from then he has never returned to the property.

‘The marriage is over,’ she said. ‘It lasted a week and a half or possibly two weeks. We haven’t lived together since he was arrested.’

She told the court she was pregnant with Gray’s child when they married but had suffered a miscarriage. She said none of her other seven children were his.

‘There was a computer that was brought to the property by him and that resided in the bedroom. The children could get into it if they needed to do homework.’

Gray, 25, of Stanley, Perth, admitted that between and September 2 and 4, 2016 he sent sexually explicit messages to another woman in which he talked about abusing children.

It is understood that Gray made unsubstantiated claims about abusing children and the woman was so horrified by the Facebook and WhatsApp conversations that she called the police.

Customer adviser Gray admitted sending grossly offensive or obscene messages which caused fear or alarm to the woman from his then family home in Perth.

He denied two further charges relating to making and having indecent images of children but he was found guilty of both after a trial.

‘The content of the conversations discussed indecent images,’ he said. ‘Videos of young children being sexually abused are discussed and files are exchanged, but the exact content is not known.

‘When he is offered a video of a one-year-old child, the accused states: ‘Older than that please – but surprise me.”

Gray boasts on Skype that he has ‘a lot of different stuff’ and the conversation between him and another paedophile turns to ‘really rough videos.’

Mr Peebles said the search of the online chat site’s history established that Gray and another user had been sending each other files to watch.

When the police searched the computer’s hidden file locations they found three videos and 46 still images which gave them cause for concern.

The officer said there were brief gaps in the online chats which suggested that those were periods when Gray and his contact were watching videos they had exchanged.

The trial was told that at one point Gray said: ‘What the f*** is wrong with you?’ and then blocked the person he had been talking to online.

Sentence against him was deferred for the preparation of background reports and his details were added to the Sex Offenders Register.

Mrs Gray married the fiend at the high-class Bachilton Barn in Methven, Perthshire.

Basic hire of the popular venue, which boasts stunning gardens and a gazebo, comes in at nearly £5,000.

Photos from the big day show the newlywed couple hand-in-hand surrounded by smiling friends who shower them in confetti.

Gray sports a traditional kilt and smiles as he clutches a champagne flute. Mrs Gray declined to comment.