A woman has lashed out at a ‘bridezilla’ whom she claims chose the ‘ugliest dresses ever’ for her bridesmaids.

The anonymous woman, from the US, took to Reddit to vent her frustration at her bridesmaid outfit, which she claims wouldn’t sell for $10 after she was made to fork out $169 for the dress.

To make matters worse, the bridal party were also asked to wear cowboy boots which were ‘new or looked new’, as well as pay an extra $75 for professional hair and make-up.

Many Reddit users admitted that the while the dress ‘wasn’t very nice’, they were distracted by the ‘hideous’ cowboy boots that the bridal party were forced to wear.

An anonymous woman, from the US, took to Reddit to share a photo of the ‘ugliest dresses ever’ that she was made to wear as a bridesmaid

Sharing a photo of the bridal party, the woman commented: ‘Am I overreacting or are these literally the ugliest bridesmaid dresses? The color was “tickled pink” and I’m still trying to resale the dang thing, for $10 (sic)!’

She later added: ‘We each had to fork out $169 for the dress, make sure our cowboy boots were new or looked new, and pay $75 for professional hair and make-up. So I feel like this may fall into Bridezilla as well.’

Users were quick to comment, with one saying the ‘heinous’ dresses were only made worse by the presence of the boots, while another dubbed them ‘horrible’.

‘Those dresses are heinous, especially with the boots. I’m getting a hillbilly chic vibe from the photo,’ said one.

Users quickly commented, with one saying the ‘heinous’ dresses were only made worse by the presence of the boots, while another dubbed them ‘horrible’

Another wrote: ‘The dresses are not bad, the boots look horrible though, don’t match the dress or the wedding.’

A third insisted: ‘Dresses are fine. The boots are hideous.’

And one agreed: ‘I’ve seen worse but of course she made you wear cowboy boots with it.’

Several admitted that while they wouldn’t pick the dress themselves, it definitely wasn’t the worst they’d seen – with some going so far as to call them ‘cute’. 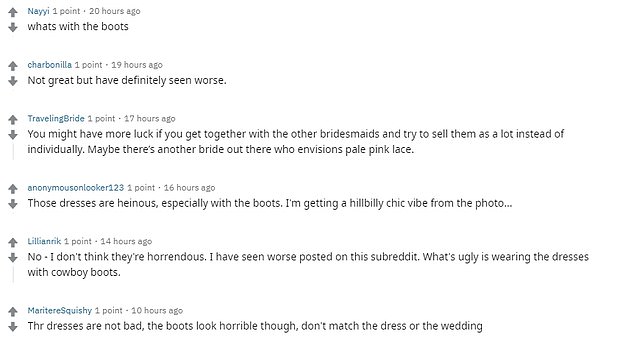 Several admitted that while they wouldn’t pick the dress themselves, it definitely wasn’t the worst they’d seen – however many were still concerned about the boots

‘I don’t like the dress/boots combo. I also think the colour is a bit child-like,’ wrote one. ‘I personally wouldn’t put an adult in it. The dresses definitely don’t flatter the shapes of all the bridesmaids. However I’ve seen much worse.’

‘It’s not a very nice dress, but I refuse to believe it’s worst ever. I’m tempted to find pictures of uglier ones,’ insisted another.

A third wrote: ‘I think they’re cute to be honest. Not sure about the boots, though’.

‘I’m okay with the color, a little childish but it’s fine. The boots make everybody look short and chunky and don’t match the vibe of the dresses. The dresses are fancy,’ another commented.

‘If you all had heels on and the dresses were individually tweaked, some a few inches longer, some shorter, I think you all would have looked really nice.’