A ‘self-centered’ bride-to-be has been slammed for dumping her sister from her bridal party after she gained weight during Covid lockdown.

The woman, who is believed to be from the US, asked her elder sibling to step down from bridesmaid duties when she discovered she had gained 10 kilos since the pandemic began in March.

In a lengthy post on Reddit, the ‘bridezilla’ attempted to justify her actions by saying the move was for her sister’s ‘own good’ because of her history of an eating disorder, relapses of which are typically preceded by a period of notable weight gain.

But the truth came out later in her rant when she raged: ‘Yes, of course protecting my wedding day is part of my consideration here – God forbid one single day doesn’t revolve around her.’

The move has sparked a family feud with the girls’ mother and other sisters in support of the bride while her father and fiancé believe she is in the wrong.

Her decision has also been blasted online, with many branding her ‘self-centered’ and ‘disgustingly’ image obsessed.

‘My sister Julia was overweight growing up while the rest of us (five girls, no brothers) were always petite,’ the bride began.

‘No one in our family ever treated her badly for her weight, though my mum did try to help her diet several times throughout our childhood for purely health reasons.’

The bride continued that ‘Julia’ was first hospitalised for an eating disorder at the age of 18 and has been ‘in and out’ of treatment ever since.

Do you think the bride had her sister’s best interests at heart?

In February, one month before the outbreak of the coronavirus crisis, she appeared to be on a ‘recovery kick’, eating healthily and looking well.

‘I was hopeful she could keep it together and felt okay about asking her to be a bridesmaid at that point,’ the bride wrote.

But when the sisters were reunited after 10 months of pandemic-related separation on Christmas Day, things were different.

The bride said Julia had gained ‘a lot of weight…probably 10 kilos’ and was immediately concerned because past relapses were preceded by dramatic weight gain.

She said it was the fear of a relapse that prompted her to drop her sister as a bridesmaid, arguing it would allow her to ‘wear whatever she wants, be skinny or fat, show up or not’ without ruining the celebration. 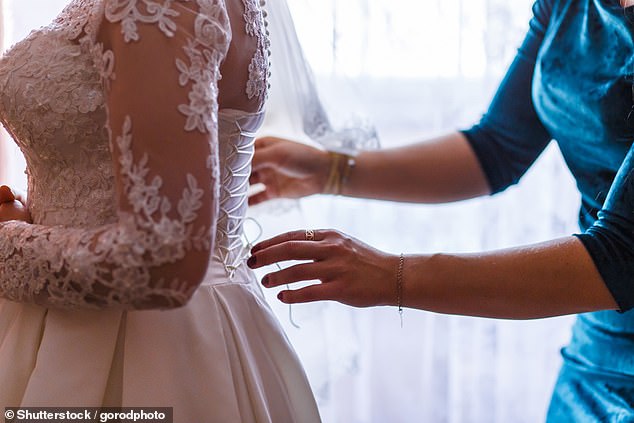 The decision has been blasted online, with many branding the bride ‘self-centered’ and ‘disgustingly’ image obsessed (stock image)

After their family dinner, the bride texted her sister asking how she was feeling mentally and her sister admitted she was struggling with ‘body image issues’ since putting on weight.

‘I kindly asked her to step down from being a bridesmaid, explaining that it was for her own good and I was only doing this because I cared about her,’ the bride said, adding her sister ‘seemed upset’ but agreed to step back.

While her mother and sisters support her decision, the bride’s father is ‘furious’ that she has left Julia ‘heartbroken’.

But she felt confident that she had done the right thing until her fiancé told her she was wrong and criticised her for drawing attention to her sister’s weight.

Responses to the post reveal an audience divided between those who see the bride as vain and vacuous and others who believe she meant well despite approaching the issue insensitively.

‘Bride sounds so self-centered. Thank god the fiancé talked some sense into her,’ one person replied.

‘The obsession over the wedding pictures is disgusting. Why does a wedding have to be an Instagram event?’ asked a second.

A third added: ‘With family like this, it’s no wonder [Julia] has an eating disorder.’

But some gave the bride the benefit of the doubt.

‘Maybe she went about it the wrong way, but her feelings are valid,’ one woman wrote.

‘Also what girl doesn’t dream a perfect wedding day, it’s natural to overthink all the variables that play into it.’