Bride petrified of heights weds her groom 100 FEET in air

All brides have high expectations of their wedding day – but this woman hadn’t banked on exchanging vows 100ft in the air.

Adrenaline junkie Jai Baker, 30, left his bride Leanne, 29, stunned when he crashed £9,000 on hiring a platform which was hoisted in the air by a crane for the couple, who are from Lowestoft, to say ‘I do’.

The hairdresser’s shock at the stunt was no surprise, given that she’s terrified of heights.

Leanne, who was filmed for an episode of E4’s Don’t Tell the Bride after agreeing to let her husband-to-be plan their big day, threw a tantrum when she was presented with a safety harness to put on over her dress, but eventually agreed to face her fears to go through with the quirky ceremony.

The couple made history in front of the E4 cameras, becoming the first couple in the UK to wed in the sky – and viewers couldn’t believe the bride went through with it.

Despite her initial terror, when Leanne arrived at the playing field venue, her anger disappeared and she faced her fears by climbing on board to marry her love..

The quirky nuptials infuriated viewers, who criticised the groom for picking an ‘awful venue’, claiming ‘romance is dead’. 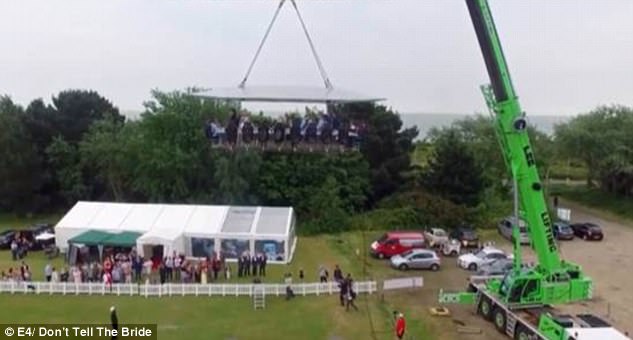 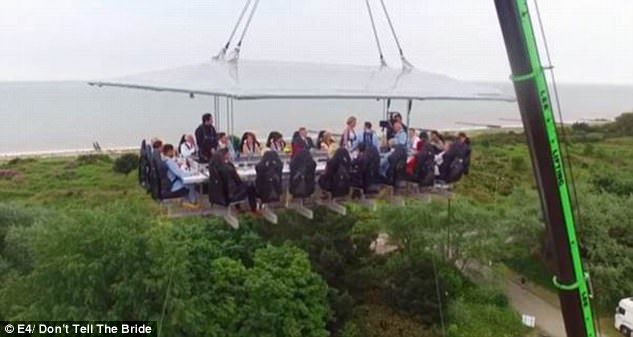 With views of their home town Lowestoft surrounding them, the bride and groom pledged to spend the rest of their lives together in front of their wedding party 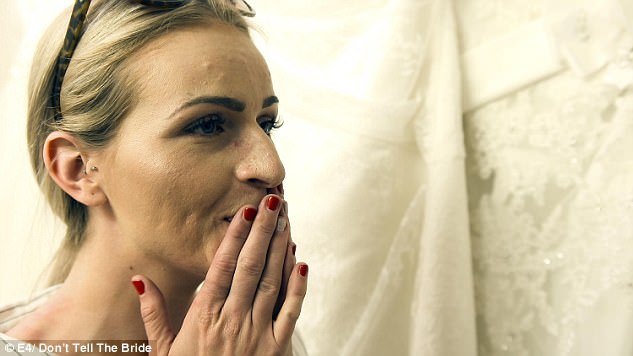 Leanne was upset when her dress didn’t fit, and was horrified to learn on the day that she was expected to wear a harness

One tweeted: ‘Nothing will top the bride afraid of heights in a wedding dress two sizes too big and a harness while attached to a crane.’

‘I wouldn’t be marrying that t*** on Don’t Tell The Bride wearing that harness, suits are awful venues awful groom is awful,’ another posted.

A third said: ‘What female would actually let their husband plan their entire wedding? If you do, you should expect it to go to s***.’

Jai selfishly planned his wedding giving zero thoughts to his bride’s fear of heights, explaining that he wanted to top his proposal which saw him bungee jump from the Las Vegas Stratosphere Casino Hotel.

But even his friends were not convinced, as one said after he announced his extreme idea: ‘You are trying your hardest not to get married mate.’

While Leanne dreamed of traditional, low-key nuptials, her groom steamed ahead blowing nearly two thirds of the £14,000 budget on the sky platform – which had been reduced from £16,500 to £9,000.

Normally on the E4 show viewers expect the groom to go on a wild, expensive stag do, but Jai sacrificed the party to pull off the wedding of his dreams.

However, in an attempt to keep costs low, Jai decided to arrange for Leanne and her hens to spend the day on a farm doing chores.

Although she admitted it was on her bucket list to milk a cow, the bride-to-be was left in tears over the day, which one of her friends branded ‘the worst hen do I have ever been to’. 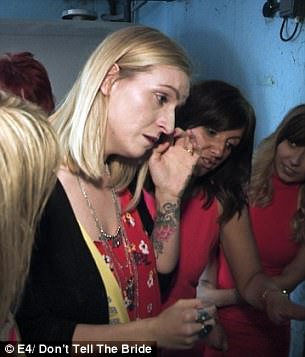 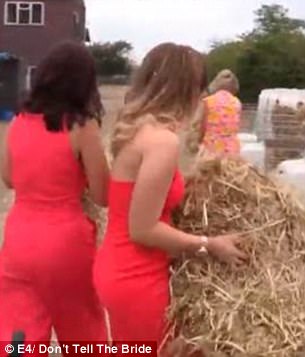 Leanne had been left in tears after Jai organised her to spend the day on a farm for her hen do. The hens had to muck out the animals and put in straw 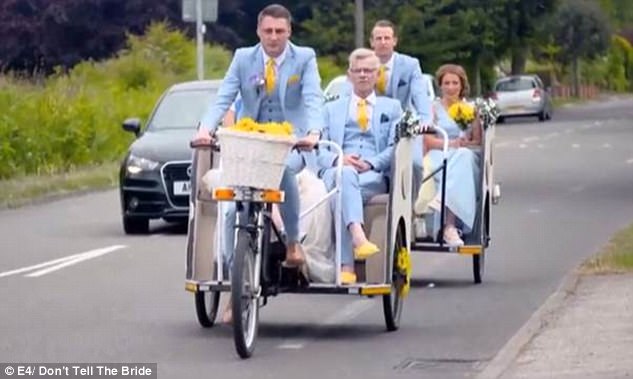 As the mishaps began to pile up, from the bridesmaids dresses that were ordered online to an oversized wedding dress – the entire day looked doomed for failure.

But in a shock turn of events, Leanne turned up to the playing field in which Jai had hired (for free) on the back of a rickshaw, and agreed to go ahead with the ceremony.

After being convinced to wear the harness and seeing her wedding party ready and waiting alongside her groom she didn’t let him down.

‘I am so anxious it’s unreal. My heart is in my actual chest beating like it’s going to come out.

After promising to spend the rest of their lives together through many tears, Leanne praised her new husband for pulling off such a spectacle.

‘That was actually really good. I am glad I did it, not so much at the time.

‘I’m so proud of Jai, to put all this together, I’m on a high. This has probably been one of the best days of my life. I’m never ever going to forget it.’