A bride-to-be has been left fuming after her future brother-in-law ‘stole her thunder’ by booking the same venue for his wedding – a week before her own big day.

The unnamed bride-to-be, believed to be from the UK, explained her future husband’s brother had also proposed to his girlfriend with a ring that was very similar to her own, but that she’d overlooked it to begin with.

However, she was not happy to learn he’d booked the same venue, explaining that her deposit is non-refundable so she can’t change it, and she’s nervous to bring the wedding forward because of Covid-19 restrictions.

After she shared her story on Mumsnet’s Am I Being Unreasonable, the bride-to-be was told by appalled parents she was rightfully annoyed at the very ‘weird’ behaviour of her brother-in-law and his future bride.

An unnamed bride believed to be from the UK revealed her future brother-in-law booked the same venue a week before her wedding was due to take place, after proposing to his girlfriend with the same ring as hers (stock picture)

The unnamed bride explained she got engaged over the summer, while her future brother-in-law popped the question a short time after, with ‘an identical ring’.

‘Mine is slightly unusual but doubt I’m the only one in the world with it so can’t really get annoyed about that,’ the bride wrote.

‘Anyway, they’ve booked their wedding for the week before ours at the same venue,’ she added.

She said the brother knew about her wedding venue and date and asked whether it would be unreasonable for her to be annoyed at his decision.

She explained she was worried that a lot of the guests on her future husband’s side would compare the two receptions, because they would be happening at the same venue and only a week apart from each other.

‘I worry the weddings will be compared / feel like it’s deja vu or guests will think it’s weird,’ she said.

She also later explained she could not change the venue without losing her deposit, which had already been paid for.

Instead of calling the bride a ‘bridezilla,’ many people sympathise with her, agreeing she was right to be annoyed, and that her future brother-in-law had been acting weird.

‘That would p*** me off too and I usually roll my eyes at people being overly precious about their weddings but I don’t think you are,’ one said

‘I was fully prepared to flame you but actually that is pretty weird behavior from them… is it too late for you to change venue,’ one asked.

‘That is truly bizarre and it would make me change the date and location of my wedding,’ another said. 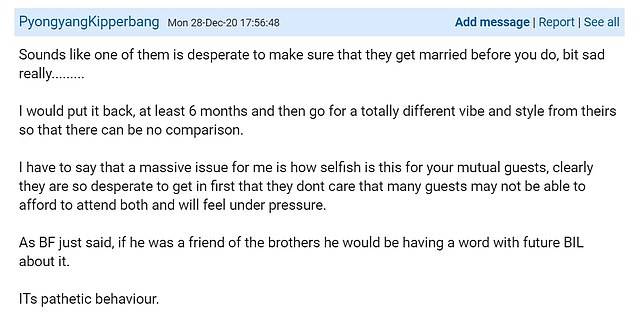 People agreed with the bride that the brother-in-law’s behaviour was ‘weird.’ Some even called it ‘pathetic’

‘I hate it when a bride becomes bridezilla but in this case I would be totally pissed off with this situation, ‘ one said.

‘How did they end up choosing the same venue?’, they added, ‘ I would change your venue and keep quiet until they have sent the invites out.

‘Yes it’s weird and quite rude in my opinion,’ one said.

‘I’d be pretty cross and I’m far from bridezilla material (I organised my wedding in 4 weeks),’ they added, before offering some possible solutions.

‘Given you’re s****** with the deposit I’d probably look to move my date to the autumn,’ they said.

‘The gap between the weddings and a more autumnal theme to the wedding would make it feel very different.

‘I think they’re pretty cheeky for doing this, especially booking the week before,’ they added.

‘Sounds like one of them is desperate to make sure that they get married before you do, bit sad really,’ one said.

People suggested the bride change her wedding date if she could not change the venue, so that there’d be more time between the two receptions

‘I would put it back, at least six months and then go for a totally different vibe and style from theirs so that there can be no comparison,’ they added.

‘I have to say that a massive issue for me is how selfish is this for your mutual guests, clearly they are so desperate to get in first that they dont care that many guests may not be able to afford to attend both and will feel under pressure,’ they went on.

‘As BF just said, if he was a friend of the brothers he would be having a word with future BIL about it, It’s pathetic behaviour,’ they concluded.

One person said to keep all future wedding plans a secret, but also tempered that guests wouldn’t mind going to the same venue twice.

‘I would be keeping ALL wedding plans top secret from now on,’ they said, adding: The fact is tho that as long as you look after them the guests will not care of your days are identical tbh.’

However, someone had the complete opposite take.

‘It will completely take the shine off your wedding, who would want to go to the same place twice in one week,’ they said.

‘It will pretty much be an identical wedding. Also your family going to both may think it’s you who copied,’ they added.

Another tried to explain why they decided to have their wedding at the same venue as their sister.

‘So I had my wedding at the same venue as my sister. I remember being at my sister’s wedding and thinking “I have always wanted to get married here, and I can’t be put off my dream, just because she has already done it”,’ they said.

‘So I did. Three years later. I also used the same bridesmaid dresses which was partly a money saving thing and also partly because I really liked the style,’ they added.

However, they noted that their situation was different from the bride, because they had discussed the issue with their sister before booking.

‘Maybe it was odd but as far as I know we were both happy with the situation but then me and my sister are really close and so talked it through every step of the way, your situation sounds much more odd,’ they said.

One parent also suggested that the bride could have a joint wedding with the brother-in-law in order not to outdo each other.

Save money and have a joint wedding instead of trying to out do each other.