Bride shamed after buying $3 Kmart makeup bags for her bridesmaids

A bride-to-be has been slammed on a public forum after she purchased $3 makeup bags for her bridesmaids as gifts and wrote on them in glitter glue.

The ‘tacky’ design was likely a kind bid from the Australian bride to make her friends feel special on her long-awaited day, but women on social media insisted she missed the mark.

‘Do these look okay? I made them last night using makeup bags, fabric glue and glitter,’ the anonymous woman captioned the images.

And while some said it was all about the ‘thought’ that went into the designs, she received a generally negative reception for her craftsmanship. 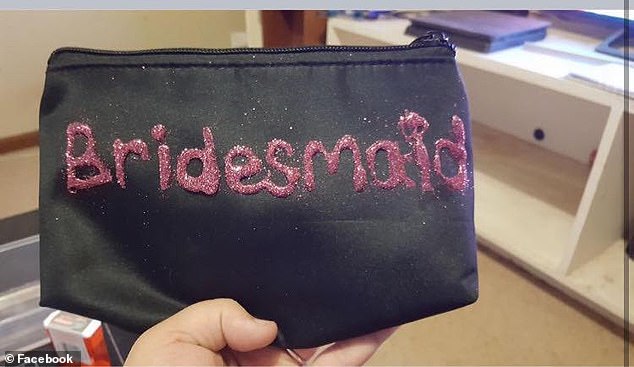 The ‘tacky’ design was likely a kind bid from the Australian bride to make her friends feel special on her long-awaited day, but women on social media insisted she missed the mark

‘If you had given me this I would have definitely said no,’ one woman remarked.

‘It would have been far cheaper to take the makeup bags somewhere and ask someone to cut vinyl for those,’ said another.

A third added: ‘This looks like if an eight-year-old girl wanted to have a slumber party with, for some reason, a wedding theme.

‘Like this is what she would spend the day before making and then present to her friends when they arrived.’

Some brides choose to give their bridesmaids and maid of honour a gift as a way of asking them if they’d like to fulfill the position.

While these are typically something small, like a purse or a necklace, they very rarely involve DIY work.

Many people pointed out that she could have bought stickers or decal for the cosmetic bag that would have been cheaper than purchasing the glue and glitter.

Others argued that it’s the ‘thought that counts’ and that she shouldn’t be slammed for ‘doing her best’.