Bride slammed after telling her brother her wedding was cancelled as he refused to lend her $15,000

A bride has been slammed as ‘mean’ and ‘malicious’ after telling her brother her wedding was cancelled.

The bride, who was given the pseudonym Karen, had asked her sibling Matt if she could borrow $15,000 to pay the suppliers two days before the big day, according to a Reddit user from the US.

When Matt refused, he reportedly got a phone call 10 minutes later from one of Karen’s bridesmaids telling him it was off.

Posting on the subreddit r/weddingshaming, the user said Karen tried to same tactic with all her family members including her grandmother and aunts, and promptly uninvited them when they failed to cough up.

‘This happened a few years ago. Names are changed to protect the guilty,’ they explained.

A bride asked her brother two days before the wedding whether she could borrow $15,000 to pay the suppliers on the wedding day, as she thought she would be able to pay after the date (stock image)

‘The bride I will name Karen. Her brother Matt was a few years older and really loved his sister. Karen wasn’t the brightest bulb in the box.

‘Karen calls her brother two days before her wedding. Says to him, “I put deposits down for the hall, the photographer, the caterer, the flowers and the DJ. But I didn’t know I had to pay in full on my wedding day, I thought I could pay later. Do you have $15,000 I could borrow?”

‘Her brother laughs and tells her, “Nope. I don’t have anything I can give you.” They chatted a few minutes and hung up.

’10 minutes later he gets a call from one of her bridesmaids telling him the wedding is cancelled. Ok. Sad but whatever. 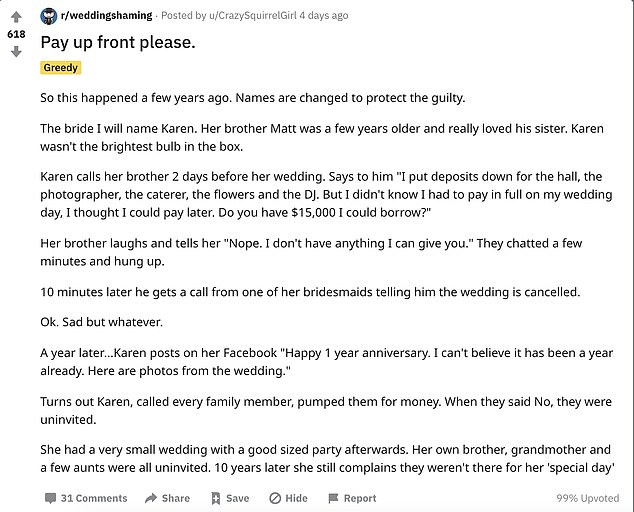 Posting on the subreddit r/weddingshaming , u/CrazySquirrelGirl, from the US, shared the story

‘A year later… Karen posts on her Facebook, “Happy one year anniversary. I can’t believe it has been a year already. Here are photos from the wedding”. Turns out Karen called every family member, pumped them for money. When they said no, they were uninvited.

‘She had a very small wedding with a good sized party afterwards. Her own brother, grandmother and a few aunts were all uninvited. 10 years later she still complains they weren’t there for her “special day”.’

In response to the post, fellow Reddit users slammed the bride, calling her ‘stupid’, ‘mean’ and ‘maliciously ignorant’.

One said: ‘Wow well she might not have had any cash but she sure did get a package deal on stupid and mean.’

Other Reddit users have slammed the bride, calling her ‘stupid’, ‘mean’ and ‘maliciously ignorant’

Another added: ‘That’s… impressive. In how awful it is,’ while one asked: ‘Since she said “borrow”, did she pay anyone back?’

A fourth wrote: ‘I’m a little impressed by the gall they had to pull this stunt AND complain people weren’t there.’

And one user said: ‘We call those people maliciously ignorant.’

But some Redditors had questions; one asked: ‘How the hell did they go an entire year without a clue they were married?’

Other users had questions. One asked: ‘How the hell did they go an entire year without a clue they were married?’, with the original poster explaining they had already lived together and another saying their brother was married for four years before telling anyone

The original poster explained that they were already living together, while another revealed their brother was married for four years before telling anyone.

Another Reddit user questioned the fact the bride was expected to settle the balance on the big day.

‘Hold up, she was able to pay everyone the day of? That seems a little weird to me? Most vendors I’ve seen require paid in full weeks, if not months, in advance,’ they wrote.

A Reddit user responded: ‘My vendor didn’t send me the invoice for the total until one week before the vow renewal. I had the option to make changes to fit with the budget I had left by the time we got to the date.

‘I think delay is more standard just in case something changes with the client before their date. I did pay 30 per cent deposit which went to the total cost.’

Another user questioned how much everyone gave her to pay off the $15,000, while another said she had ‘probably expected to be able to pay for the wedding with gift money afterwards’.

Another user asked how she was able to pay the suppliers on the day of their wedding, while another said they didn’t get an invoice for the full total of their big day until a week before they renewed their vows

One Reddit user questioned how much everyone gave her to pay off the $15,000, while another said she had ‘probably expected to be able to pay for the wedding with gift money afterwards’

Other users shared their own stories of their wedding having to be paid in full on the day of the wedding.

One user said: ‘I was in a wedding once that had several things paid in full, day of. I remember the bride forgot the cashier’s check and the caterer said they wouldn’t serve the main course until they’d been paid in full with cash or a cashier’s check.

‘Cue the whole bridal party scrambling, trying to find ATMs and withdrawing maximum allowed amounts. It did get sorted in the end, but jeez.

‘We knew the bride was good for it (lifelong friend, very responsible, just didn’t realise/forgot it needed to be a cashier’s check) but yeah, some vendors allow final payment the day of the event. 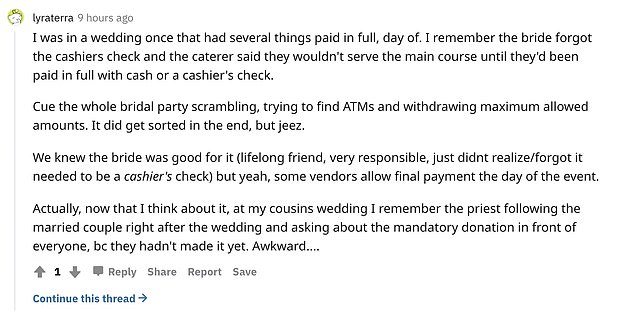 ‘Actually, now that I think about it, at my cousin’s wedding I remember the priest following the married couple right after the wedding and asking about the mandatory donation in front of everyone, because they hadn’t made it yet. Awkward…’

Another told their story. They said: ‘I did not witness this but heard that at a wedding the newlyweds also did not have the money to pay for the venue. They thought they would receive enough cash from the guests to pay the venue with. Well… someone stole the “envelopes box”. They found out half way.

‘Two sets of families stressed out, the bride in tears, the guests shocked. Apparently everybody did the best they could to gather the money so basically all family members and also some guests went all together to the ATM.’

Another Reddit user hinted that they knew a similar story as they ‘wondered’ whether they were ‘related to her’.