A bride landed herself in hot waters after she revealed she asked her cousin – a natural redhead – to dye her hair before being a bridesmaid on her big day.

The anonymous bride-to-be, 24, believed to be from Australia, complained that her cousin Ella’s ‘long, flaming red’ hair would clash with her green and blue colour scheme on Reddit’s Am I The A******.

She revealed she had asked Ella to conceal her hair with a wig or use a temporary dye, but Ella had refused, causing the two women to row before she resigned as a bridesmaid.

The bride-to-be was slammed online after it was shared in the That’s It, I’m wedding Shaming group, with many suggesting she was ‘insecure’ and concerned about being upstaged.

The anonymous bride-to-be, 24, believed to be from Australia, complained on Reddit that her cousin refused to dye her ‘waist-length flaming red’ hair before being a bridesmaid at her wedding (pictured, stock image)

The 24-year-old bride revealed she had asked her guests to pick outfits that respected her blue and green peacock theme, but that the instruction did not include hair.

She then added that Ella had ‘natural bride ginger hair’ and while she would ‘never’ ask someone to permanently change their locks, had suggested her bridesmaid temporarily dye hair before the wedding.

She said: ‘Ella argued that she has been growing her hair for 6 years and doesn’t want to risk the colour not washing out.

‘I thought this was ridiculous because it literally says washes out in like 14 washes. But Ella says because her hair is completely natural colour it might take strongly to her hair.’ 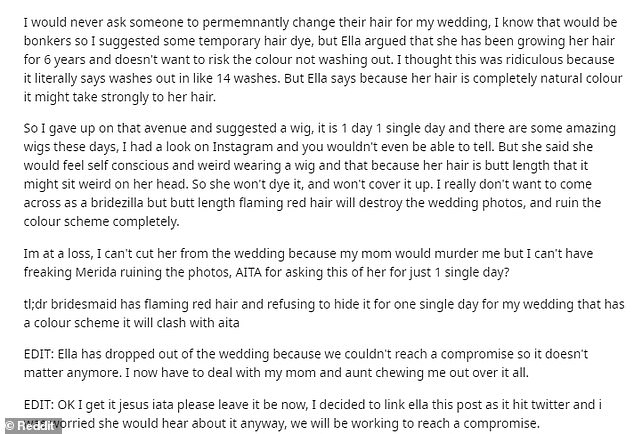 The bridezilla shared her concerns about her cousin’s redhair online, revealing that she had asked the bridesmaid to wear a wig and even consider using a dye on it

The bride brushed off the protest as ‘ridiculous,’ and then requested that Ella wear a wig on the big day.

Ella refused and explained to the demanding bride that a wig would make her feel self-conscious and weird.

The bride said she didn’t wanna come across like a bridezilla, but added her cousin’s waist-length ‘red hair will destroy the wedding photos, and ruin the colour scheme completely.’

She went on: ‘I’m at a loss, I can’t cut her from the wedding because my mother would murder me.’

Reddit slammed the bride, with some claiming she was just insecure about being upstaged by her cousin’s gorgeous hair

Later, she said that her cousin had decided not to come to the wedding as a result of the row, and added that her mother and aunt arguing with her about it all.

She was slammed on Reddit over her demands, with many branding her an a******.

One commented: ‘This is her natural hair. If she had artificial coloring, I can see asking her to dye it again, but you are asking someone to change their natural hair color. Yes, your wedding, but there are limits are you have exceeded the limit.’

Another wrote: ‘I think you don’t realize how impossible what you’re asking is. I have just about this colour hair and I will never dye it, because it is very difficult to get back to the same colour. I have several friends with this hair and NONE of us would ever dye it.’

The woman was also criticised on the That’s It I’m Wedding Shaming Facebook group, where people deemed the bride was insecure

Another explained: ‘Red hair dyes poorly, and often does not come out the colour anticipated, often with a greenish hue. It also often has a thicker shaft, which also effects the dying,’ another explained.

Another wrote: ‘As a redhead myself, I can tell you that we look amazing in peacock colours. OP is just jealous of her cousin and is scared that she will draw attention away from her.’

The bride was also criticised on Facebook, where the post was shared in a wedding shaming group.

One user commented: ‘That is the most ridiculous thing I have ever read. The bride is off her rocker.’