A penny pinching bride-to-be has split opinion after revealing that she is considering asking her wedding guests to pay for their meal instead of buying a gift.

The mum-of-two, from Brisbane, is trying to save some money on the expensive day, and explains that neither her nor her partner are too interested in presents.

Many people have slammed the bride for having ‘bad manners’, but others think it is perfectly acceptable and have shared the clever ways they saved money on their own big day.

‘Let’s chat weddings! Newly engaged and looking for your best saving tips,’ the mum said in a post to a popular budgeting Facebook group.

‘I have considered asking guests to pay for their meal in lieu of presents. Is this a thing?’

Is it okay to ask guests to pay for their own meal at a wedding instead of giving a gift?

She explained that her and her fiancée are both in their thirties and ‘don’t really care about gifts’.

However, she is worried it wouldn’t be fair to ask of her friends who are travelling interstate.

The mum is having a dry wedding, and was considering getting food trucks or a spit roast for catering, which will also cut down on costs.

Hundreds have weighed in on the issue, and many shared their outrage at the suggestion.

‘If you’re inviting people you should feed them. They also shouldn’t have to give a present as flights and accommodation just to get there is enough in my opinion,’ one woman said.

‘Definitely bad manners to ask guests to pay for their own meal,’ another said.

‘Oh no that’s really rough asking people to pay for their own meals. Maybe you will have to save in another area to pay for the food,’ another wrote. 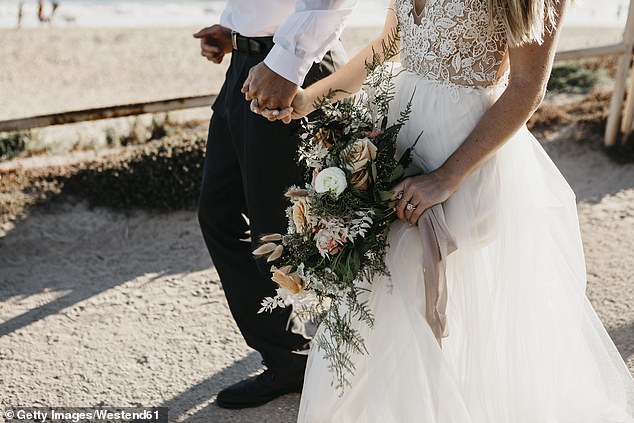 Many people have slammed the bride for having ‘bad manners’, but others think it’s perfectly acceptable and have shared the clever ways they saved money on their own wedding day (stock image)

‘Yes I think meals is definitely one thing not to ask guests to pay for,’ another agreed, saying she would ‘skimp out’ on other areas of the wedding instead.

However, more people weighed in to say they see no problem with the idea.

‘If anyone thinks it’s “rude” or “bad manners” then they don’t need to be included in your day. Those who love and understand you will understand your reasons for this,’ one woman said.

‘We are in our thirties and the same. We don’t need presents, and I have spoken to a few friends who think it’s a great idea also. It is one of those things that is either loved or loathed,’ another agreed.

Many commenters shared other thrifty wedding hacks the couple could try out to save money.

* Buy your own flowers at a wholesale price from a market

* Hire a spit roast or food trucks for catering

* Making your own centrepieces, decorations and guest invitations

* Have a meal at lunch instead of dinner

* Book a restaurant instead of a venue

* Don’t have a big group of bridesmaids

‘Think of the three most important things each and spend your money there,’ one woman advised.

‘We did our own flowers and it saved me over $5000,’ another commented.

Another said she ordered her dress cheaply from Vietnam where they custom made it from her measurements.

Several people opted for a spit roast or food truck style catering instead of the traditional sit down dinner.

One woman suggested not mentioning the word ‘wedding’ when making hair or beauty appointments as it ‘instantly doubles the price’.

Other people saved by buying a second hand dress, doing the photography themselves, buying flowers wholesale at a flower market, having lunch instead of dinner, booking a restaurant instead of a venue and keeping the guest list low.