Bride-to-be, 28, fell into sepsis coma beats the three in 100 odds to survive

Victoria Gunstone, 28, from Cardiff survived odds of just 3 per cent after contracting sepsis

When Victoria Gunstone got bad back pain she thought she had pulled a muscle in the gym.

Three days later the 28-year-old had multiple organ failure and was in a coma in hospital on life support. Her family and fiancé were told she may not surivve the night.

Medics put the recruitment sales worker in an induced coma on a ventilator, but told her family to expect the worse when she failed to respond to antibiotics.

They stayed at her bedside as doctors battled to save her life. Six months on and Victoria, who was unconscious for five days, said knowing how she got sepsis and how she managed to survive it both remain a mystery.

But she believes that being fit before she became ill helped save her.

‘I thought I had aches and pains from the gym but one day I had to go to bed and couldn’t sit up it was so bad,’ said Victoria.

‘I had bad pains in my leg and back and was choking being sick because I couldn’t sit up. When I’d been in bed 24-hours and it was getting worse I dialled 999.’

Paramedics took Victoria straight to the University Hospital of Wales in Cardiff where she was kept in overnight with a suspected slipped disc.

But as Victoria was waiting to be discharged the next day her blood pressure dipped and her organs began to fail. 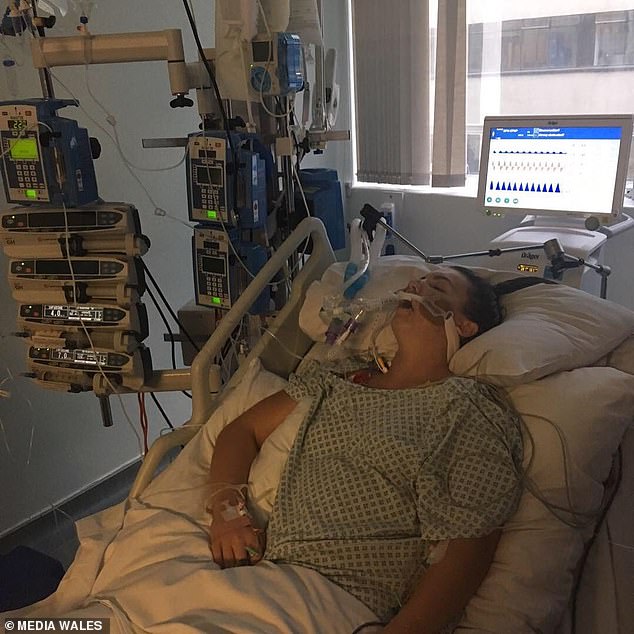 ‘I’d gone in on the Friday night. Saturday I was waiting to be discharged and by Sunday I was seriously ill. They were running tests and thought I had sepsis but didn’t know the cause because I didn’t seem to have any internal infection or cuts. I was OK and then suddenly went into multiple organ failure.

‘They rushed me to intensive care with multiple organ failure and by that time I had also picked up double pneumonia.

‘I was so ill I couldn’t breathe for myself.’

Fighting tears as she recalls what she feared were her daughter’s last hours, Victoria’s mum Beverley, 57, said: ‘On the Sunday Victoria was sitting in bed talking when suddenly her blood pressure went low and her heart rate started to drop. In front of my eyes she started to collapse in bed.

‘I was asked by a nurse “do you know what sepsis is?” Then they took her to resuscitation.

‘I was in a mess crying. Victoria was linked to machines with tubes everywhere, but still awake and breathing. 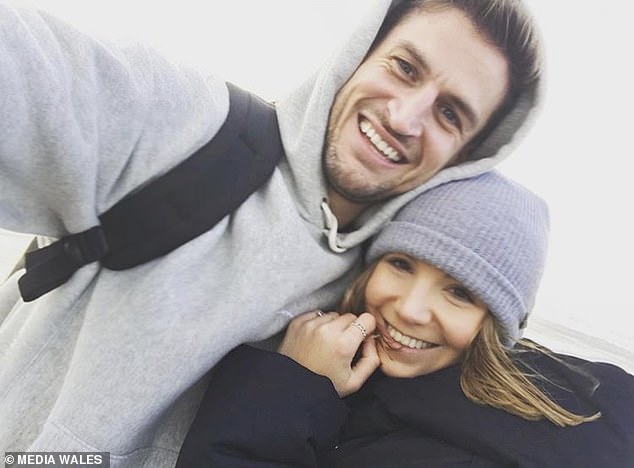 Victoria Gunstone , 28, with fiance Mike Sargent, 30. Mike said he did not sleep for eight days during the time Victoria was ill

‘They said she had double pneumonia, sepsis and possible kidney failure and might have to go on dialysis. Then her breathing was getting erratic and she was gasping for breath.

‘The consultant came in and said he needed to put her in an induced coma and that she might not survive the anaesthetic. That was such a shock I was sick in the bin and crying.

‘They told us to stay and said she was dangerously ill. They put her on a ventilator and told us to spend some time with her. I read into that we could be saying goodbye.

‘Victoria was still just awake but whispering because she was so weak. We all kissed her and told her she could fight it. I took her hand and asked her do you know what’s happening? and she said “yes, I’m dying”. I was just in bits then. I thought it was the last time we would see her. I just broke down.’

For the next five days the family stayed at the hospital. Eventually blood tests came back showing Victoria had staphylococcal sepsis but it was only when medics started giving her steroids as well as antibiotics that she began to recover.

‘We have no idea how she got sepsis,’ said Beverley. ‘They checked her head to toe to find a cut but couldn’t find anything. It came on so fast.. It’s scary. We really thought we were going to lose her. I still get really emotional about it.’ 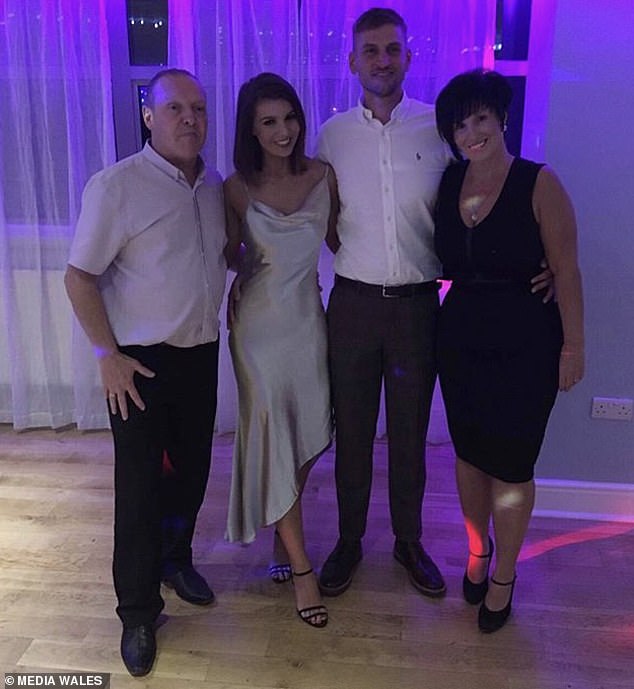 Victoria Gunstone (centre) with fiance Mike Sargent at their engagement party a month before she fell ill with sepsis. The couple are pictured with Victoria’s parents Keith Gunstone and Beverley James

Four weeks after going into hospital Victoria was finally discharged at the end of August 2018 but it was weeks before she made a full recovery.

She had to use a wheelchair for a while and lost a stone in weight. Six months on and Victoria said she is fitter than ever, back in the gym and back at work at Yolk Recruitment in Cardiff.

And she is now looking forward to her wedding next year to Mike, who proposed a month before Victoria fell ill.

Mike, 30, said it was the worst week of his life watching his fiancé fade before his eyes.

‘I didn’t sleep for eight days. I stayed at her bedside the whole time. It was hard to comprehend what was happening. We’ve been together two years. I had proposed to her in June and now I was going to lose her.

‘I was by her bed the whole time even when she was in an induced coma. The doctor laid it on that it was touch and go. He didn’t want to give us false hope.’

Victoria wants people to be aware of the signs of sepsis, but warns it attacks so fast and mysteriously it can be hard to detect. 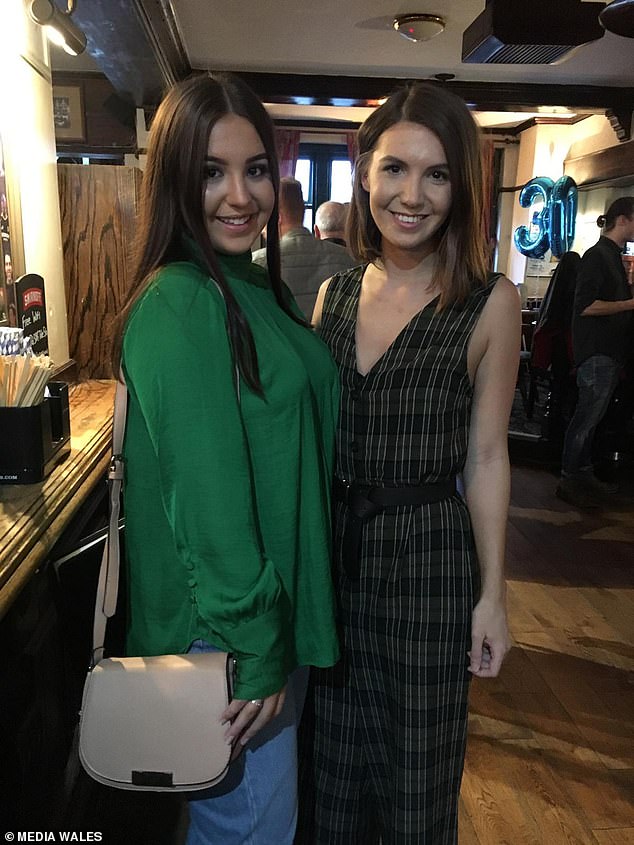 Victoria’s family were called to her bedside to say goodbye when doctors feared the worst, but she pulled through and has made a complete recovery. She is pictured (right) with sister Shannon Brookman

‘They put the reason down to catching sepsis from a bug that can be transferred through skin contact, a super bug that can live anywhere. That caused me to get sepsis.

‘Doctors said going to the gym means my lungs were strong. That helped save me, being so fit. I’m just thankful for that.’

Victoria said the experience has now given her a different outlook on life.

‘It’s hard to think how someone like myself who is young and quite fit and who eats well, could go from being fit to my death bed.

‘I feel so lucky. I used to be quite stressy and anxious but I realise now there are better things to worry about and to get things in perspective.’