Bride-to-be, 28, is the youngest of EIGHT family members suffering from the same rare stomach tumors

Lacy Anderson has a rare form of stomach cancer, but she is not alone.

In fact, all but one member of her family of nine share her same diagnosis.

One Anderson has already succumbed to the cancer. Six are now cancer free, but only because they had their stomachs removed altogether.

Lacy’s is the final battle with hereditary diffuse stomach cancer.

The disease is the result of a genetic mutation, affecting only abut 400 known families; 56 and 70 percent of members of a family with the mutation develop the cancer; in Lacy’s family, it has struck nearly 90 percent.

Despite her genetic profile, doctors dismissed 28-year-old Lacy’s stomach troubles as ‘stress,’ she says, and it her cancer was already stage four by the time it was finally diagnosed.

Lacy has idea what her prognosis is, so she is marrying her boyfriend of two years on Saturday, and drawing on the strength of a family that understands her illness like no one else could as she undergoes chemotherapy and fights for her life.

It started with Uncle Frank.

Every time Lacy’s father’s brother got a colonoscopy, doctors found polyps all over his colon.

Suspecting colon cancer or another illness, his doctors ran blood tests, and found out that he had a mutation on his CDH1 gene, quite by accident.

Once his doctors knew he had the mutation, they knew Frank’s cancer was almost certainly hereditary gastric diffuse cancer (HGDC). He was diagnosed in June of last year. 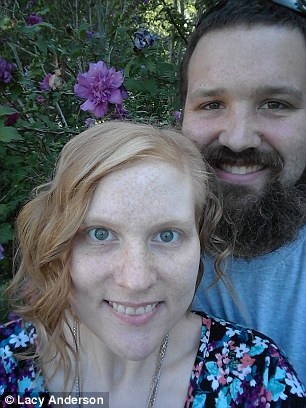 Uncertain of her future with stage IV cancer, Lacy proposed to her boyfriend of two years, Adam Levine (right)

And once they knew that Frank had the mutation, his two children, Laura and Eric, got tested for it, and were positive.

The same story played out for Lacy’s father, John, and her older brother, Robert.

There are about 120 mutations that can happen along the CDH1 gene, and any of them can cause the rare stomach cancer because the gene normally codes for a tumor suppressing protein.

These mutations can also cause breast and ovarian cancers, but most commonly tumors begin in the stomach.

HGDC gets its name from the pattern of its tumor growth.

It is marked by a series of small clusters of cancer cells distributed sporadically throughout the stomach lining.

Endoscopies typically examine the  upper part of the stomach, from where the cancerous clusters are not visible. Colonoscopies don’t catch it either.

Coupled with the fact that it is rare, and therefore not at the top of the list of usual suspects most doctors look for, this means that HGDC often doesn’t get diagnosed until it is in its late stages, when the survival rate may be as low as 20 percent.

Such was the case for Lacy’s uncle, Frank, who died in May at age 63. 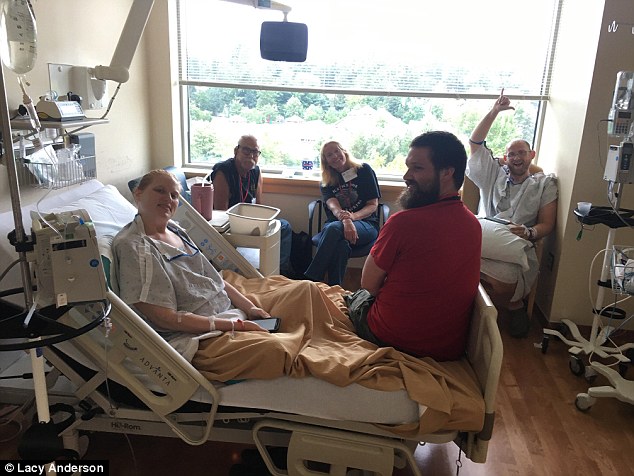 Adam and members of Lacy’s family gather around her at the hospital where she gets chemo treatments. Her father (back left) and brother (right) both have the cancer but had their stomachs removed to prevent the disease from worsening

She didn’t know it yet, but the same would be true for Lacy, too.

Lacy and her brothers, John Jr and Richie, finally decided to get tested as well and were positive for the genetic mutation.

The odds of getting HDGC are so high for those who have the mutation that doctors recommend removing the stomach preventatively.

Because the cancer is so often missed by endoscopies, the best way to screen for HDGC is the removal surgery itself.

So, in addition to Frank (before his death) six members of the Anderson family traveled to either the University of Chicago or to Maryland – where several of them were enrolled in a National Institutes of Health (NIH) study on HDGC – to have full gastrectomies.

‘There was cancer present in each and every one of them,’ Lacy told Daily Mail Online gravely. 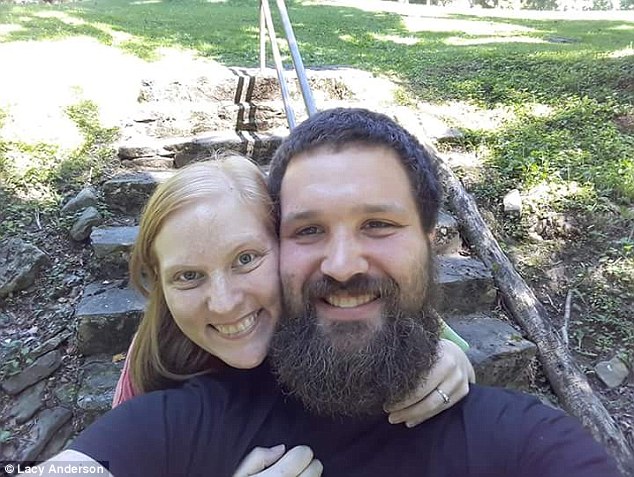 Lacy has lost half her body weight since getting sick, a fact she is self conscious about, but she is comforted when Adam tells her daily that she’s beautiful 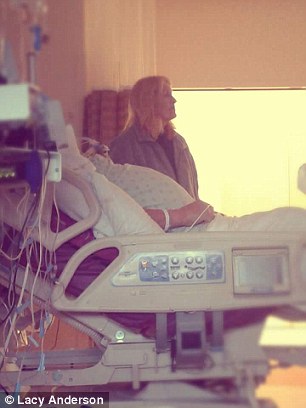 Lacy’s mother, Paula (left), does not have the gene for HDGC, but has watched her husband, two sons and now Lacy battle the disease. Lacy did the same when her father was treated in December of last year (right)

For the last year, Lacy’s stomach had bothered her, but, she figured, ‘I’m the youngest of [the family], surely I’ve got plenty of time,’ before her mutated gene turned against her and brought on cancer.

It wasn’t until the last six months that her symptoms seemed serious enough to warrant a trip to the doctor.

‘I went to the emergency room, a clinic, my regular doctor; everyone just kept talking about stress,’ Lacy says.

‘They thought it was bacterial or maybe ulcers, but no one would ever actually do a CT scan or anything to look inside and see what was going on. I’m not sure if they didn’t believe me or were worried about insurance or what.’

By the time Lacy finally went to get ‘tested’ for the cancer, by having NIH surgeons open her up to remove her stomach, it was too late.

On July 14, she found out that she had stave IV stomach cancer that had spread to her intestines and had caused fluid to build up in her abdomen. 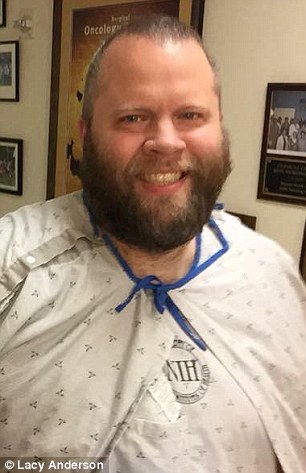 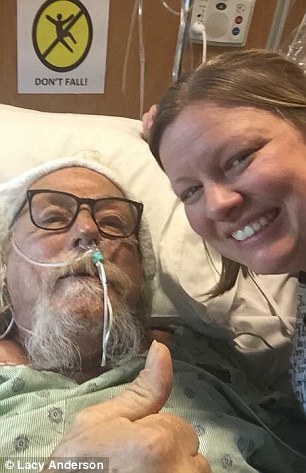 Both Lacy’s brother John Jr (left), 41, and her father John, 61, have made it through the worst of treatment: getting their stomachs surgically removed 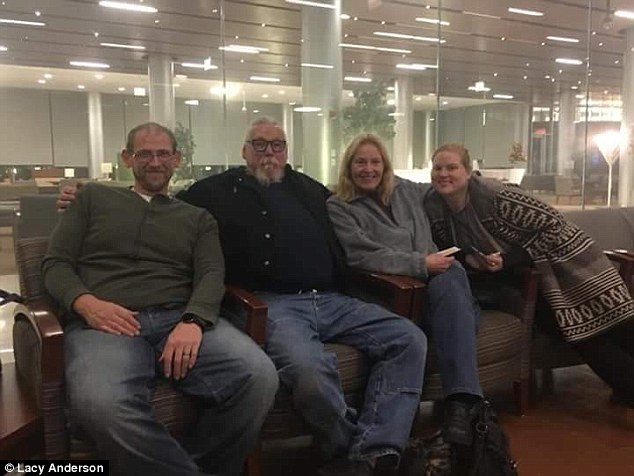 Having her brother Richie (who is 37), father, John, mother and mother, Paula (left to right) at the hospital with her comforts Lacy (right), especially since Richie and John have the same cancer

The cancer had become too intertwined with her organs for surgeons to safely cut it away or remove her stomach.

When she woke up, the NIH doctors broke the news to Lacy.

‘I never would have thought I could have stage IV cancer,’ she says.

‘The thing that terrifies me the most is having watched my uncle struggle with it for a year,’ she adds, trailing off.

Lacy was sent home immediately to start chemotherapy in the hopes that an aggressive round of the drugs would shrink the tumors enough for it to be safe to surgically remove them, eventually.

Soon after her return to Springfield, Lacy got a call from her oncologist there.

They had expected Lacy would have to wait weeks to get an appointment to start chemo, but there was an opening on July 20 – her 28th birthday.

‘My doctor said “I know everyone does something fun for their birthday, so this isn’t ideal …” but I told her I want to do it, sign me up’ Lacy explains. 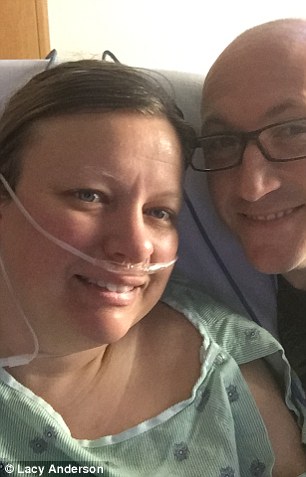 Laura (left, age 34) and Richie Anderson have both had their stomachs removed. During the surgery, doctors confirmed that they already had hereditary diffuse gastric cancer 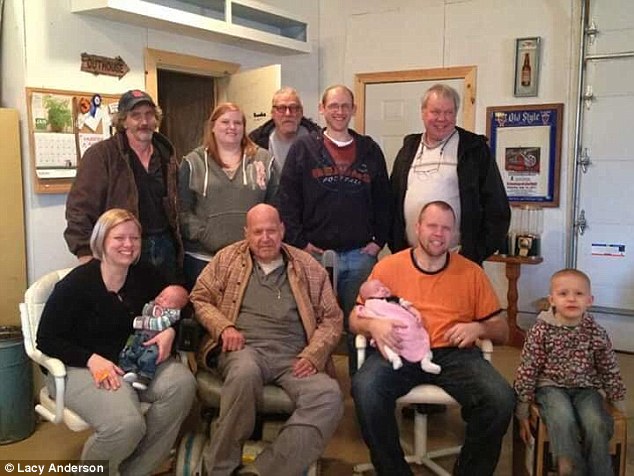 Lacy’s uncle, Frank (center of front) was the first to be diagnosed with cancer. He died in May at 63, but the discovery of his genetic mutation may have saved his kids and grandchildren

‘If they were able to get me in to start it just a week [after diagnosis], regardless of my birthday, that was the best gift I could have received.’

Even with the lucky early start on chemo Lacy knew that the future was uncertain for her, and for her relationship with her boyfriend of two years, Adam Levine.

‘I came home from all that and told him this was probably going to be the hardest thing we could have to go through. He didn’t sign up for this so I understood if he wanted to walk away,’ Lacy told Daily Mail Online.

‘He said he would never, so I asked him to marry me.’

Since the trouble with her stomach began last year, Lacy has become too sick to work, and had to rely increasingly on Adam to help out around the house.

She has dropped weight continuously. She once weighed 300 lbs, but is now just half of that, at 145 lbs.

‘I’m extremely self-conscious about my weight, but that never stops Adam from telling me I’m beautiful every day,’ Lacy says.

So far, she has had three chemo treatments, and they haven’t treated her too badly. 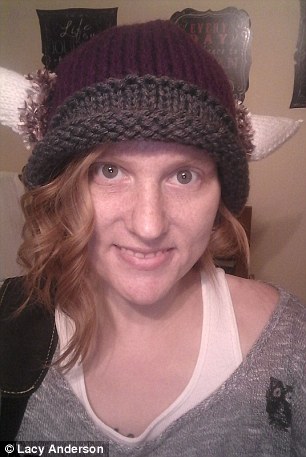 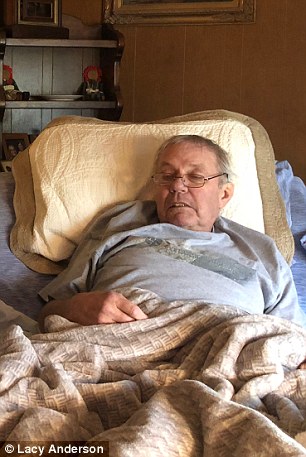 The Anderson’s call themselves ‘warriors,’ as they fight cancer, so Lacy wears a knit warrior hat to treatments (left). Her cancer is stage IV and inoperable, as was her uncle Frank’s (right) 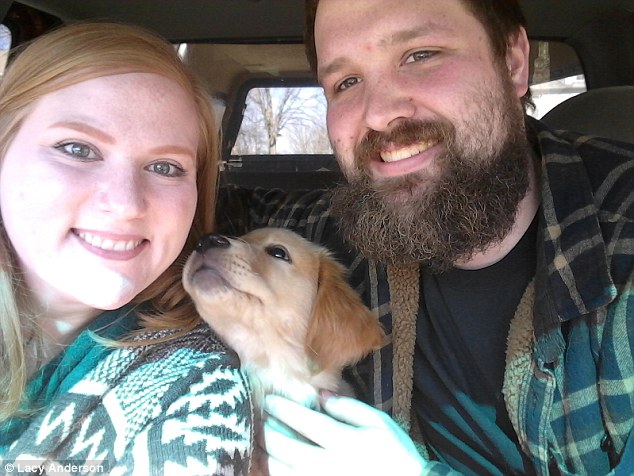 Every time she returns from 48 hour treatment trips to the hospital to return to Adam (right), the boyfriend of two years whom she will marry Saturday, and their dog, Blue (center)

In fact, before she started treatment, Lacy’s tumors would sometimes swell and block the passage of food through her digestive system, landing her in the hospital.

Since starting chemo, however, her stomach ‘seems to be opening up, so I have very high hopes that it’s working,’ Lacy says.

And with each treatment, she feels a little stronger.

‘The farther we go along, it makes me feel like I have a little more pep in my step,’ she adds.

The side effects haven’t been too bad for Lacy so far, but she does hate being away from her family, fiance and fur babies for 48 hours at a time she stays in the hospital so doctors can monitor her during chemo.

‘It’s always overwhelming to get home to them,’ she says.

Her family has, quite literally, ‘all gone through it and they have crowded around me to help me,’ says Lacy.

‘It’s really brought us closer together, as awkward as that sounds.’

Lacy will get three more chemo treatments over the next month or so, and then doctors will give her another CT scan to see if it’s working well enough that they might be able to operate, or if they should try immunotherapy.

Lacy is cautiously optimistic, but focuses on what she can do right now: spread awareness of the CDH1 mutation and HDGC, spending time with her family with whom she shares so much and, on Saturday, get married.

It won’t be the wedding she expected or planned on – her sister-in-law has planned Lacy’s big day, since she’s been to sick – but she’s excited nonetheless.

‘All I have to do is show up and enjoy my day,’ Lacy laughs.

Her whole family will rally around Lacy – the last one in the Andersons’ collective fight against stomach cancer – and Adam as they tie the knot.

‘I have no life expectancy now, at any time I could completely go into remission, or … you never know,’ she says.