In China, the wedding of the century happens every other day, as engaged couples will spare no expense for their big day.

Rachel Wee and her fiance Ken, from Singapore, are no different and star in a new documentary by Channel 5, Crazy Rich Asian weddings – which looks into the lavish weddings of the wealthiest heirs and heiresses of China.

The pair tied the knot in April in Singapore, and treated their some 600 guests to a three-part wedding.

Themed on the Little Mermaid, with pre wedding underwater photographs of the pair, the bride dressing as a mermaid for her bachelorette and climbing into a giant clamshell for her entrance for the wedding.

Rachel Wee, pictured with her fiance Ken Chen in a pre-wedding photoshoot in 2018. The couple’s wedding is featured in a new Channel 5 documentary on decadent wedding 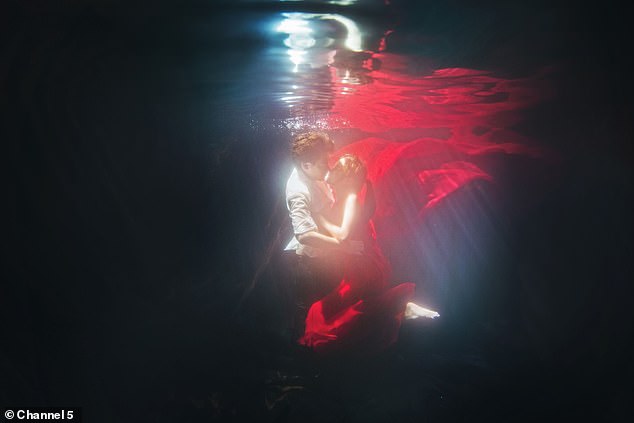 Ken and Rachel in an under-water photoshoot ahead of their wedding, which was underwater-themed 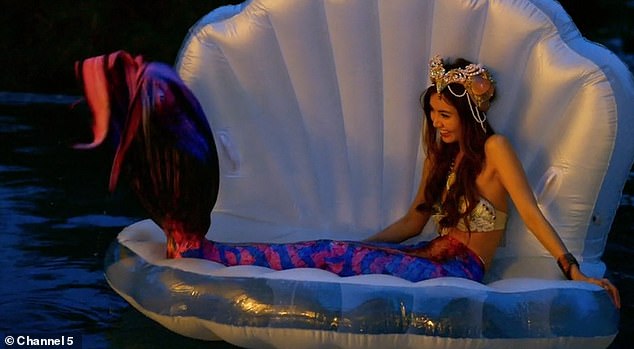 ‘Before I met Ken, my friend actually showed me his Facebook,’ Rachel says on the show about her husband to be, ‘ and I thought Ken was a player because of his good looks.’

Rachel being the daughter of a beauty mogul, and Ken being a financial analyst, everything about the celebration was decadent.

But planning this massive event is not without stress, and tensions erupt between Rachel’s opinionated mother Jean and the bride-to-be.

When discussing cake with the wedding planner specially hired for the event, Rachel says she wants a four layer cake. But her mother soon takes over the conversation and demands that the cake be bigger, and at least five layers. 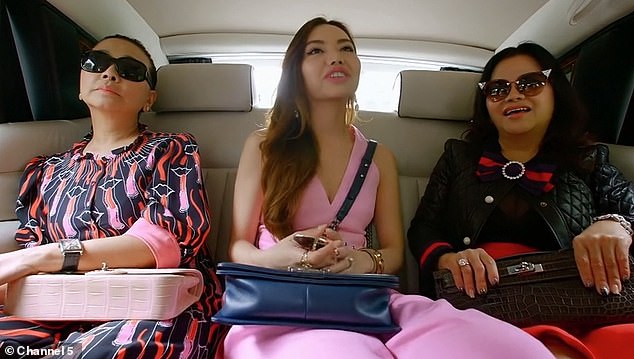 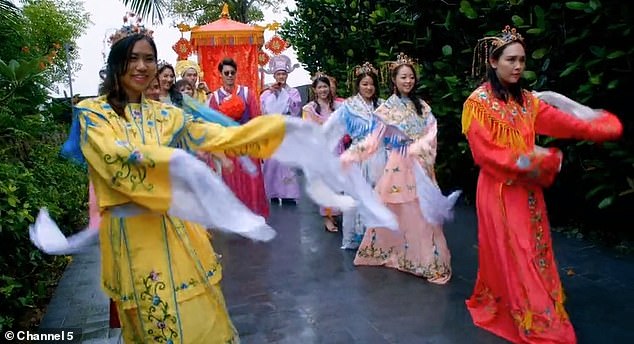 The traditional part of Rachel and Ken’s wedding celebration. The guest then headed to the church, and then the Carlton Hotel Singapore for the reception 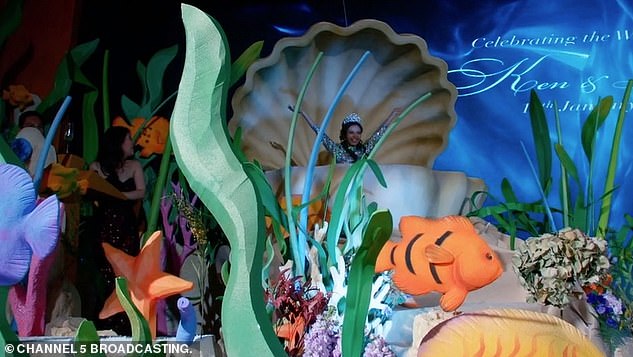 During the reception, Rachel (pictured) climbed in a giant clamshell for her entrance – Ken went up to the clam and swept his bride off her feet 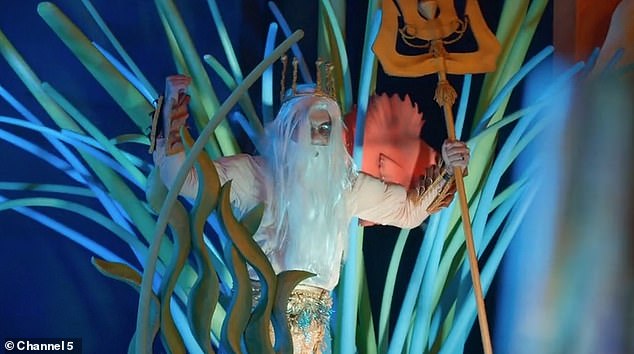 Neptune, God of the Sea, also made an appearance at the wedding – it was Rachel’s father dressed up in a costume 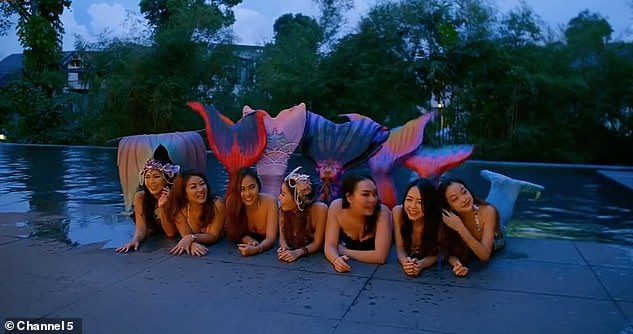 The bridesmaid party with Rachel, posing for pictures, dressed as mermaids during her bachelorette party

The wedding planner finds a common ground by suggesting to create a ‘dummy’ cake as part of the wedding’s decoration, which would be incorporated to the big cake.

‘I can accept that, but it would have to be a big mock-up for the bottom,’ Jean says.

Later, when Rachel goes to try on her wedding dress with her mother, Jean finds an issue with the train of the dress selected by her daughter, which is encrusted with 6,000 crystals.

‘I think we should add more Swarovski crystal at the end,’ she says, ‘it will make it more stunning.’ 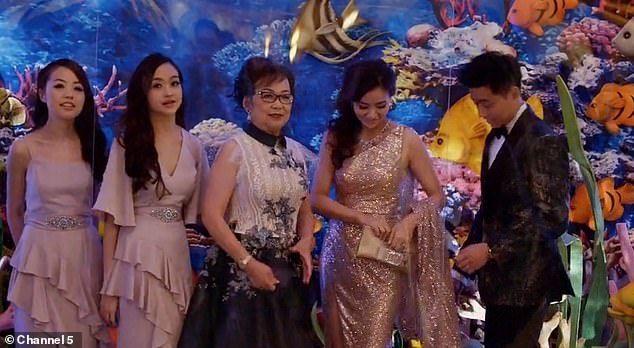 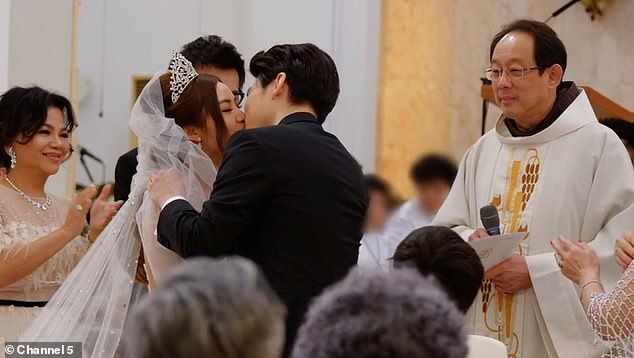 Rachel and Ken, who’ve just been married, share a tender kiss in front of their wedding guests in Singapore

Immediately Rachel seems worried by her mother’s request. ‘This is very very stunning’ she objects, pulling lightly on the dress, ‘But, I mean, since we’re going all out, might as well…’ she concedes.

‘For the wedding it’s not just for the couple, but also the family,’ Jean’s friend later explains, ‘And Jean, she’s 100% [sure] that she was to be involved in everything.’

Rachel and Ken indeed went ‘all out’ while planning their big day. 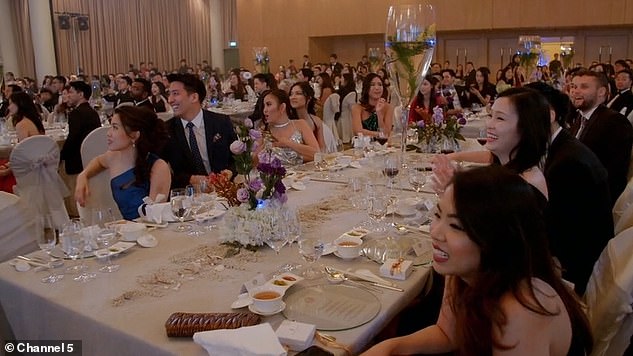 A view at the reception room at the Carlton Hotel Singapore, where one dinner table cost SG£1.328 (£757)

The couple splashed on several pre-wedding photoshoots, posing in lavish hotels and even for an under-water themed-picture. All the pictures were later showcased on the day of their wedding.

Everything about the celebration was decadent, starting with Rachel’s bachelorette’s, which was organised by her friends.

In the documentary, we find out that Rachel’s bridesmaids have rent a ‘real’ mermaid to entertain at her bachelorette. 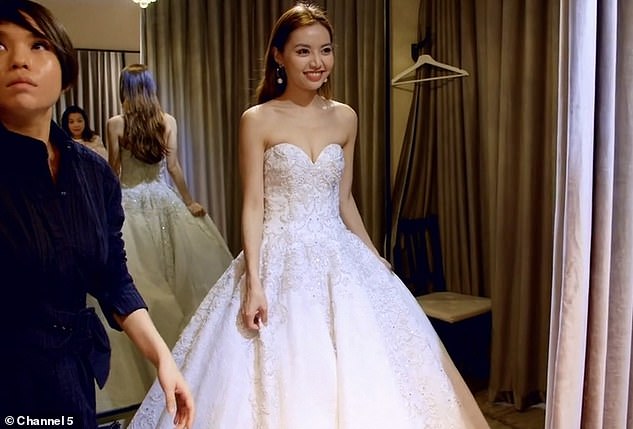 Rachel trying on her wedding dress ahead of the big day. The dress is encrusted with 6,000 Swarovski crystals 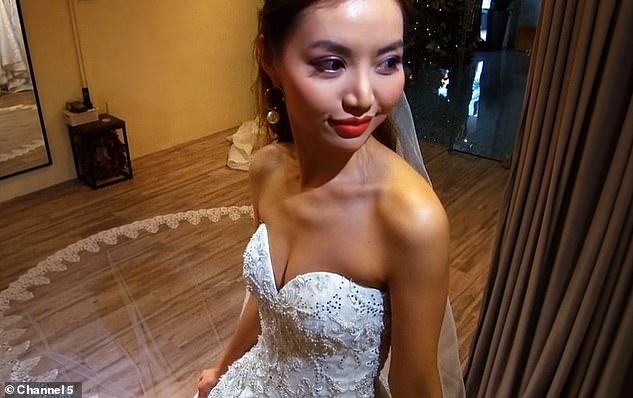 Another look at Rachel’s stunning wedding dress. The train (seen in the background) was encrusted with even more crystals at the request of Rachel’s mother

The party took place at Rachel’s parents multi-million poolside pad. All bridesmaids wore mermaid tails and jewels and took some pictures with a professional photographer for the event while the ladies munched on  finger food by a private caterer.

‘It’s my dream come true,’ says an excited Rachel as she puts on a mermaid tiara and her tail.

Later on, Rachel and Ken are filmed as they fly to London for some diamond shopping. 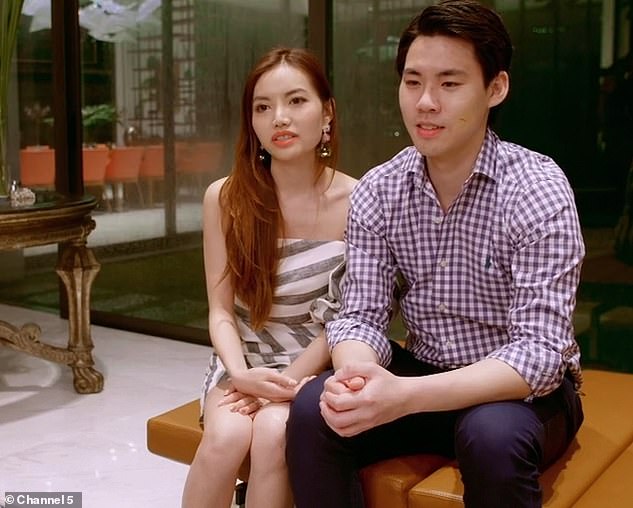 The couple held their wedding reception at the Carlton Hotel Singapore. According to website Value Champion, a dinner table at the Carlton costs at least SGD1,328 (£757).

In the documentary, during their dinner reception, the couple puts on a show for their guests where Ken looks for his bride around the room before heading to a giant clamshell on the room’s centre stage.

There, he finds Rachel hiding in the shell and lifts her up, carrying her to the dinner table.

The wedding celebration also includes a ‘boys vs girls’ dance routine, a speech from Rachel’s father dressed as Neptune, God of the Sea.

In the documentary, it is revealed that Ken and Rachel enlisted the help on a wedding planner, who claims he’s been paid at least £800,000.

‘An Asian wedding, it can be absolutely enormous,’ the man explains.