Bride to be was terrified of walked down the aisle after horrific reaction to eyebrow treatment!

A bride-to-be feared she’d be forced to walk down the aisle looking like ‘Frankenstein’s monster’ when she suffered a horrific reaction after a beautician tinted her eyebrows by mistake.

Tamika Cleggett, 30, from Perth, tried a new beautician and booked in for her eyebrows to be waxed and coloured in with pencil.

But at the end of the session Tamika was shocked to discover her eyebrows had been tinted without her knowledge – a potentially life-threatening mistake given she’s allergic to the dye.

And just a couple of hours later her brows became warm and irritated, before she was rushed to hospital with a face so swollen that she couldn’t open her eyes for 24 hours.

Tamika Cleggett, 30, from Perth, tried a new beautician and booked in for her eyebrows to be waxed and coloured in with pencil but was horrified when they dyed her eyebrows without permission 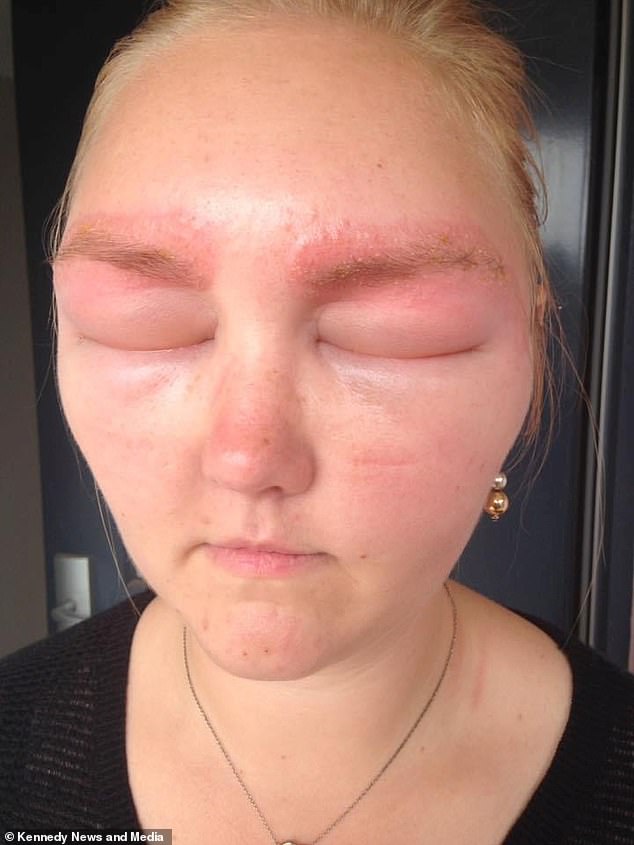 At first she felt her eyebrows heat up and get itchy until eventually they had swollen so bad her eyes were forced shut and she was blind for 24 hours, leaving her terrified for the future and not knowing if she would recover 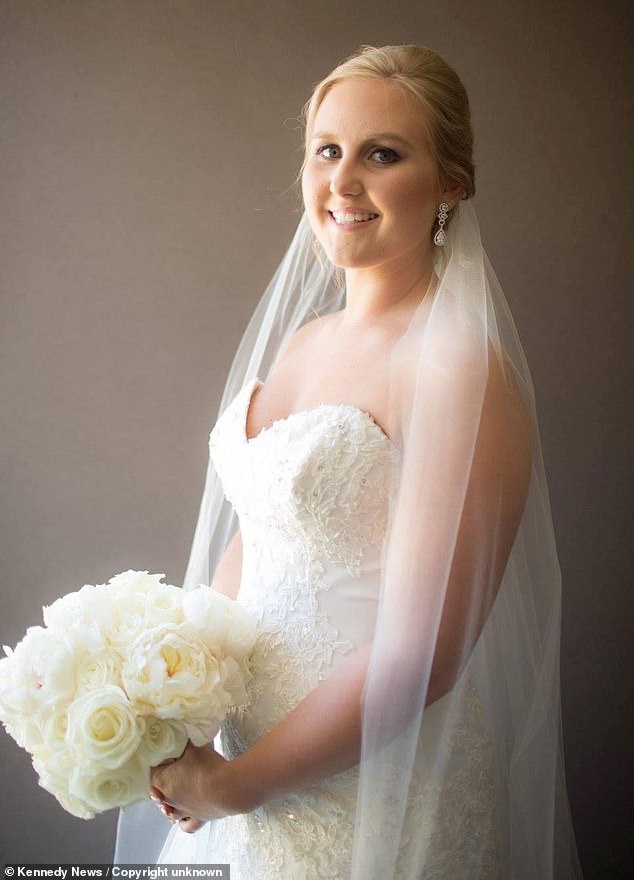 Tamika was due to get married eight months after the incident and at the time she had no idea if she could do ahead with her wedding in December, 2016.

She said: ‘I didn’t think to mention that I was allergic to tint as I’d asked for just a brow wax and a bit of pencil.

‘My biggest fear was the unknown and what was going to happen next. When the doctor’s said, “There’s nothing we can do for you”, that’s scary.’

The retail manager was hospitalised for two days and the build-up of fluid around her eyes became so severe that they ‘completely sealed’ – leaving her blind for 24 hours and fearing she’d never see again.

Shocking photos show the skin around her eyebrows red and blistering while her face ballooned. Tamika believes she looked so bad kids were ‘scared’ and she looked like ‘Frankenstein’s monster’. 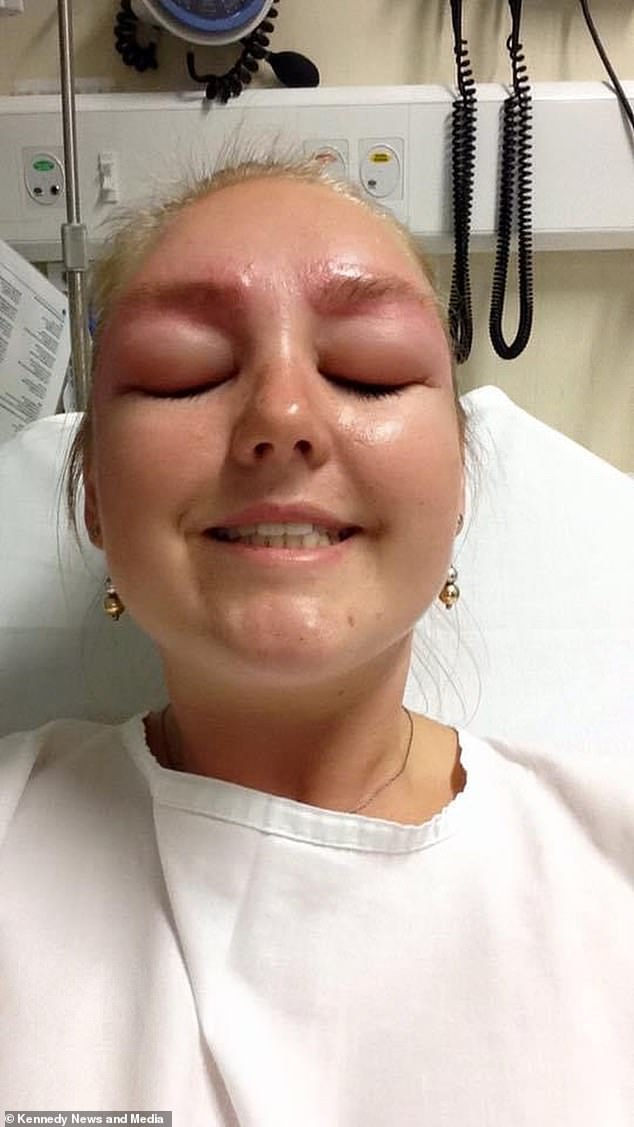 The retail manager was sent home from hospital initially, but when the swelling got worse she returned and was admitted for two days to ensure the swelling didn’t interfere with her airways 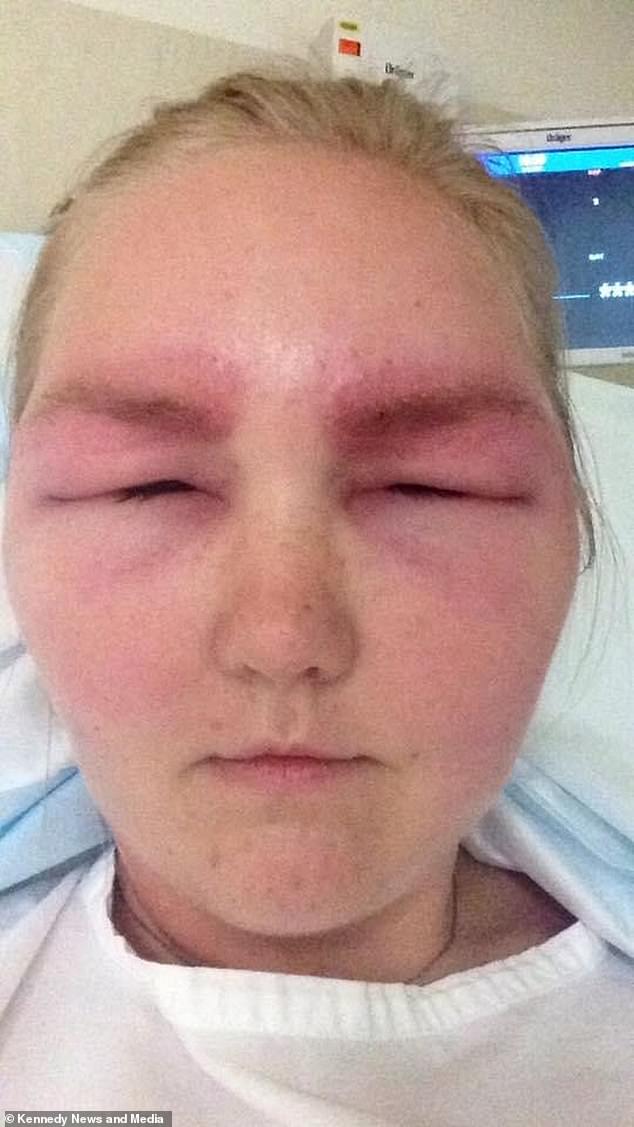 After the treatment –  in April 2016 – Tamika was forced to spend three weeks off work but thankfully made a full recovery in four weeks – well ahead of her wedding that December.

Tamika is speaking out now and sharing her shocking photos to raise awareness that such severe allergic reactions can happen and urges everyone to do patch tests before such beauty treatments.

Tamika said: ‘They basically tinted my eyebrows without my permission. I was terrified. I was worried I would walk down the aisle looking like an alien. I would have cancelled the wedding or eloped. 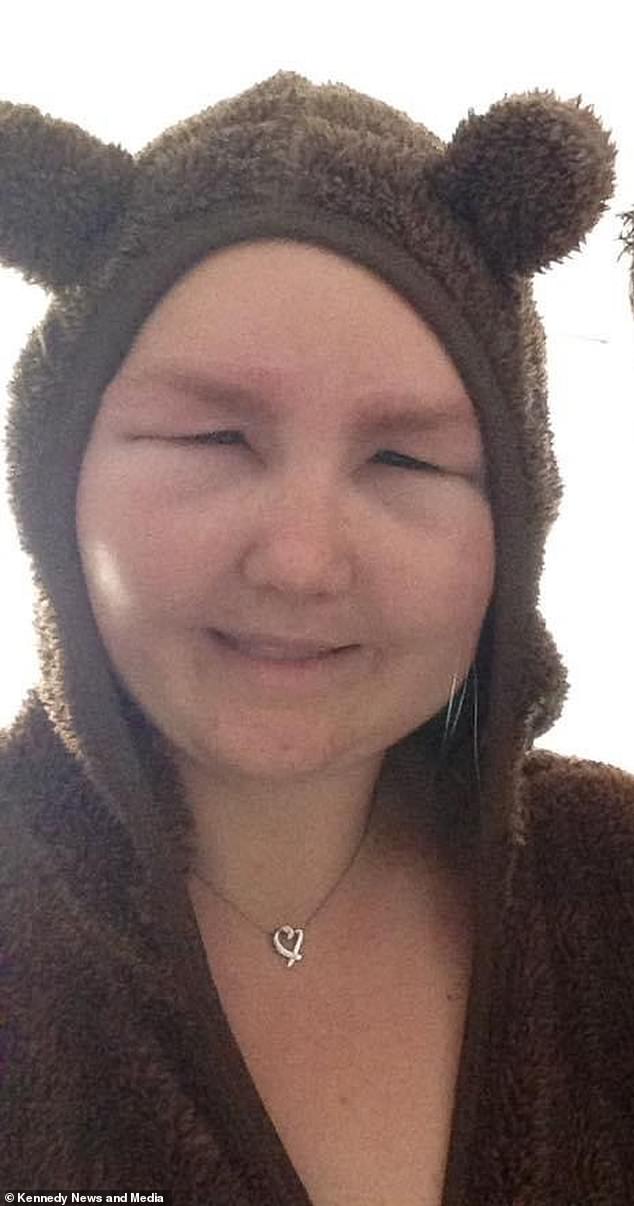 Her mother put her in this onesie with little ears, but it became a family joke because they said she ‘looked like a little chipmunk’ 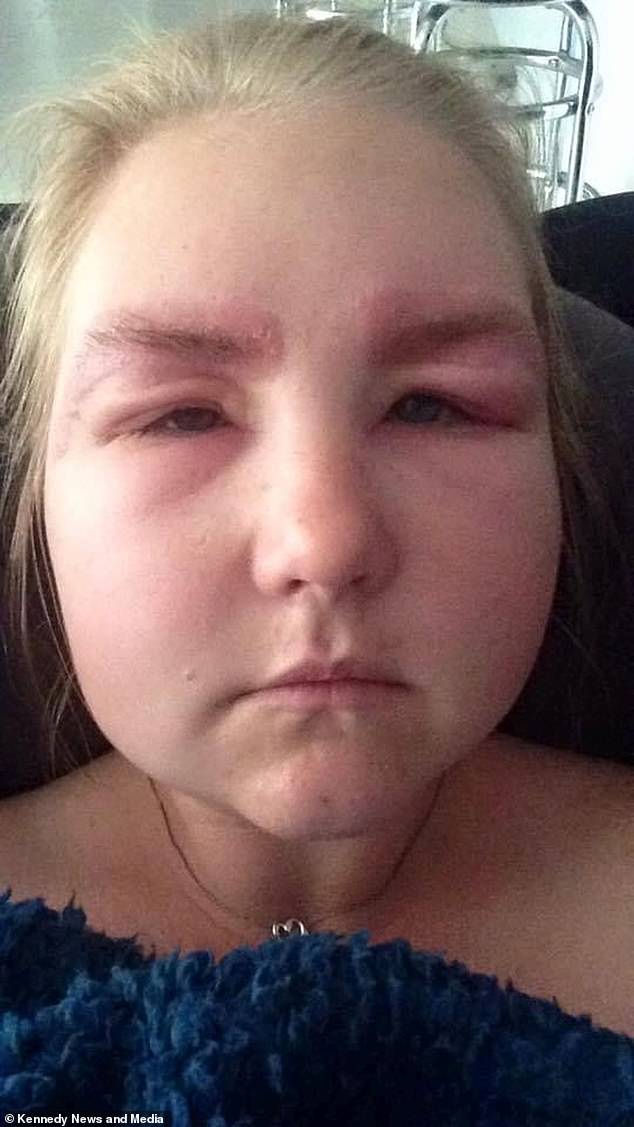 Eventually the swelling in Tamika’s eyes began to drop, until eventually the water build up moved to her cheeks, and even though she could see, she was still worried if the swelling would become a long term issue

‘I wasn’t in a good place mentally because obviously with my wedding and the unknown and if I’d be able to see again or have any scarring, it was daunting. It was kind of scary, not being myself and people thinking of me or looking at me differently.’

Tamika said just a few hours after having her eyebrows done they felt warm and had risen but the next morning her reaction was severe.

She dashed to the doctors who advised her to go to a hospital. At this point she could only see through her lashes, and she was eventually told she’d need to just wait for it to subside. 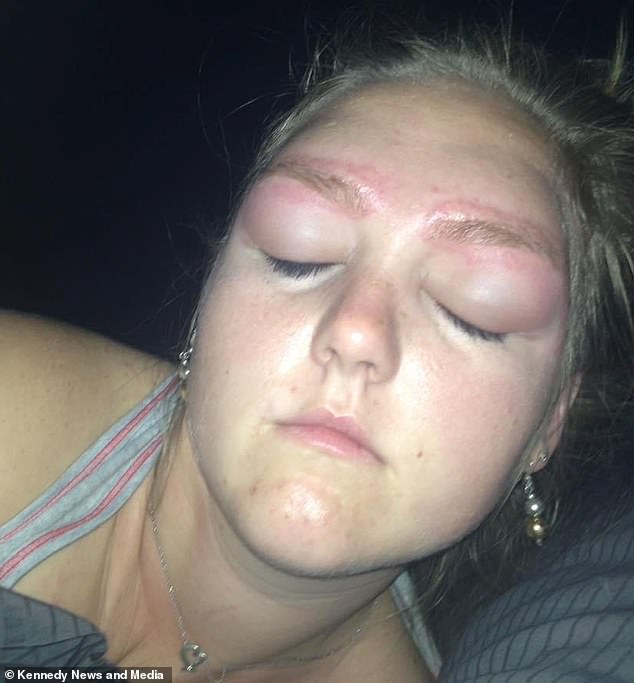 After three weeks the swelling had disappeared and she was left with scabbing, and within four weeks she had made a full recovery 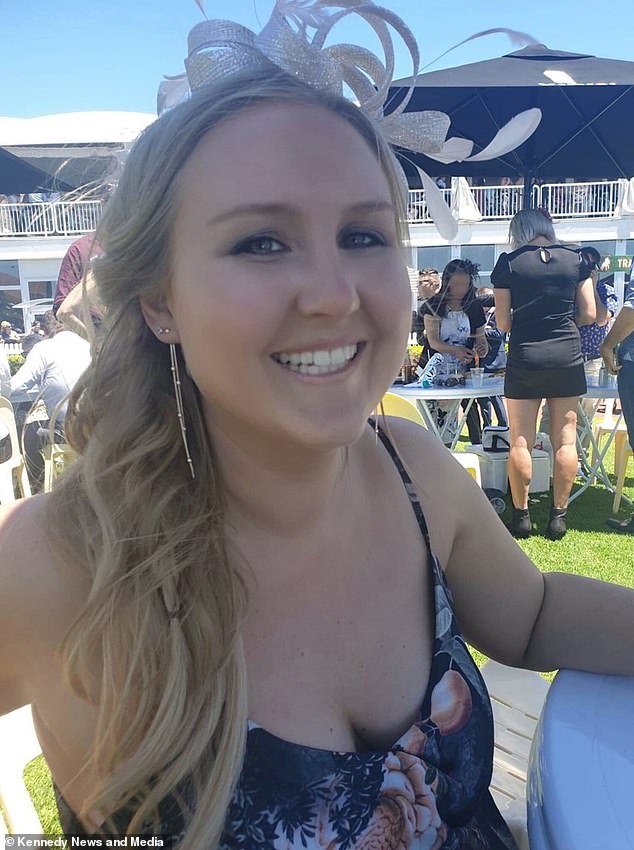 But the following day her eyes had closed completely and she returned to hospital where she was monitored for two days to ensure the reaction didn’t spread to her throat and block her airways.

The fluid eventually travelled down to her cheeks and jaw before she was eventually sent home with steroid medication.

Tamika said: ‘It was definitely the most painful thing I’d ever experienced. It was an itchy reaction at first so I put eye packs on but it didn’t do anything. And then I had a burning sensation, it was hot, and you try and scratch it, but it makes it worse. It blistered quite badly, almost like a burn, then scabbed.’

‘For four days it just kept getting worse and worse and then the fluid build-up stopped. And then it dropped further down my face and that’s what made me look a bit deformed. 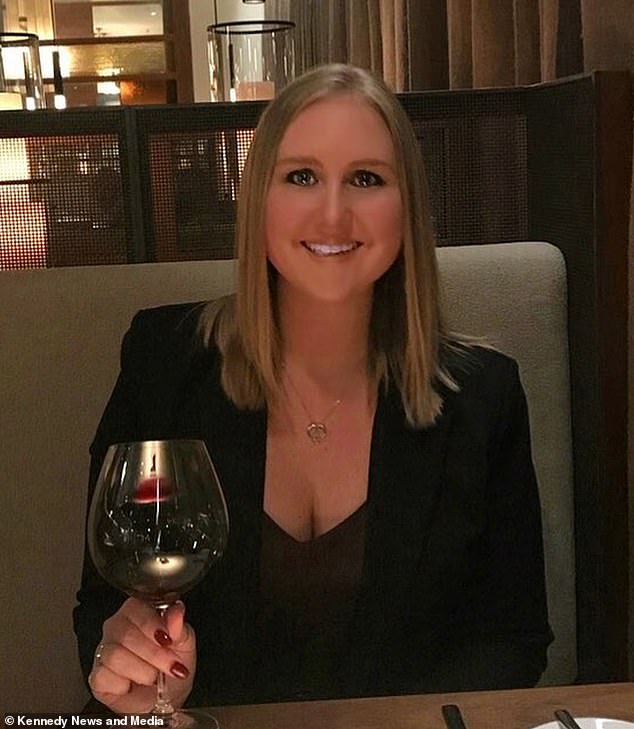 How to avoid a reaction to hair-dye:

Many hair dyes contain ingredients that can irritate your skin or cause an allergic reaction.

It’s important to be aware of this risk, and know what to do.

Many permanent and some semi-permanent hair dyes contain a chemical called paraphenylenediamine (PPD), which is a known irritant and allergen.

Always carry out a patch test before using a permanent or semi-permanent hair dye, even if you are using your regular brand.

You could also have a patch test done at an allergy clinic, to see which chemicals you’re sensitive to, if any.

If you do not develop any reaction from a patch test, you can continue to use the dye, but make sure you:

‘I was completely blind for 24 hours as my eyes were completely sealed. That was quite scary, especially because it was four months before my wedding.’

Tamika discovered she had an allergy when she had a henna tattoo and her eyelashes tinted when she was younger.

However she believes her reaction was far more severe this time around given her skin had just been waxed so the tint had entered her bloodstream.

She added: ‘My sister said I looked like an alien and multiple people on TikTok have made that comment too, which I think is funny. At the end of the day you just have to laugh it off.

‘I had a friend come over and a local show was on and she said: ‘come on, I’m taking you out’. She actually walked me around like I was literally a blind person, hopping on these rides with the kids and stuff. I can only imagine what I looked like and how much I scared the kids. In hindsight it wasn’t a good idea, I was Frankenstein to them.

‘Towards the end my mum put me in a onesie which happened to have little ears and they thought it was hilarious that I looked like this little chipmunk.’

She said she was encouraged by others to post the TikTok video sharing her horror experience, which has so far amassed more than 220,000 likes, comments and views.

Tamika said: ‘I wanted to raise awareness about what happened. To me it’s felt like enough time had passed and TikTok was an easier platform to do so it reaches more people than what Facebook would do.

‘Especially for young teens who are wanting to use more make-up or hair dye and I suppose to spread the awareness that some people can have allergies. I didn’t know until I had a tattoo [henna] and then my eyelashes done.

‘You just never know, just be extra cautious and make sure you do patch tests or if you go to a beautician then you actually sign something mentioning you have allergies.’