A bride-to-be who drowned during a friend’s hen party in Ireland has been buried in the wedding dress that she never got to wear.

Ruth Maguire, 30, who was due to marry her partner in August, was laid to rest this morning.

She is believed to have fallen into Carlingford Lough in County Louth shortly after midnight last Saturday when she became separated from her friends after leaving Taaffe’s Bar.

Ms Maguire’s coffin, covered in flowers, was carried by her partner James Griffin and followed by her three children – Tyler, Lydia and Oliver – who were joined by hundreds of tearful mourners at the service held in St Vincent de Paul Church in Ligoniel, north Belfast.

Her coffin was carried by James and her father Malachy.

The coffin of Carlingford drowning victim Ruth Maguire is carried by her partner James Griffin (left) and father Malachy, as it makes it way to Saint Vincent de Paul church, Ligoniel, Belfast 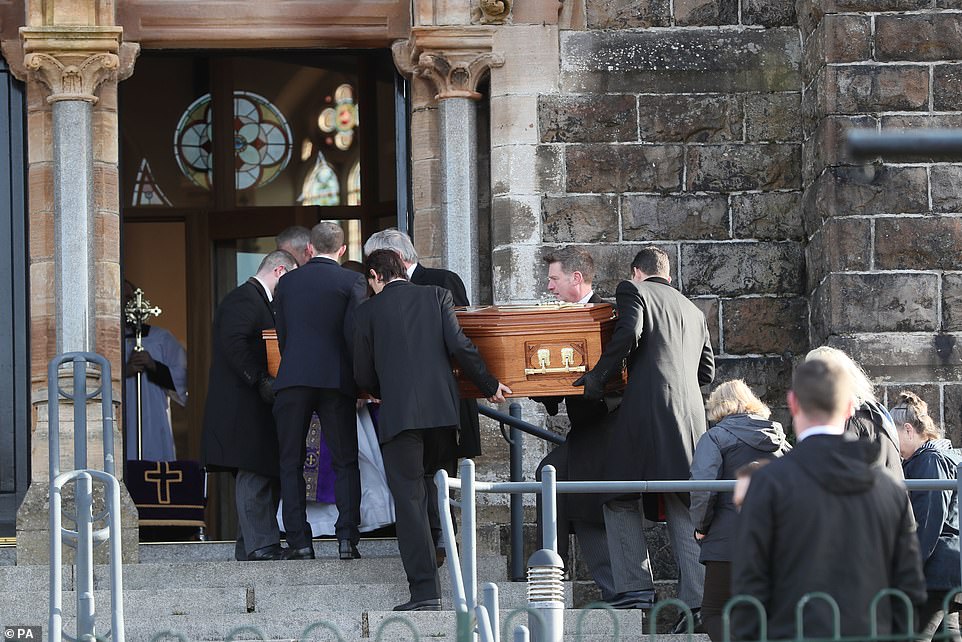 Ms Maguire’s coffin was covered in flowers and followed in by her children at the St Vincent de Paul Church in Ligoniel, north Belfast 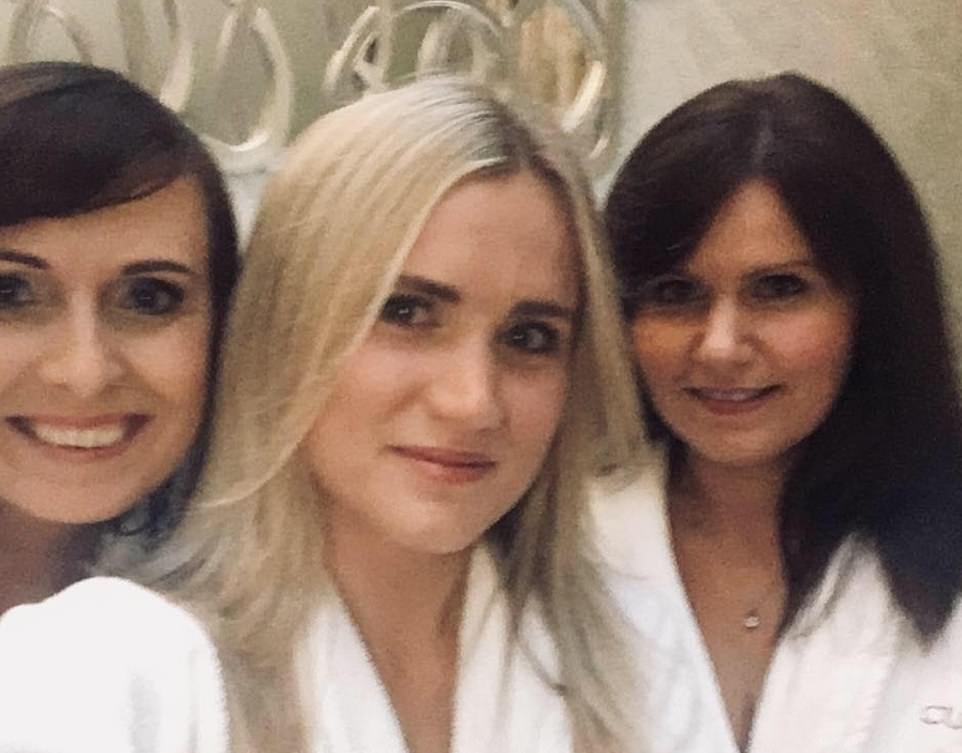 Ruth Maguire, 30, with her sister Rachel Wilkinson (left) and friend Michelle McCabe (right). It is not known when the photo was taken 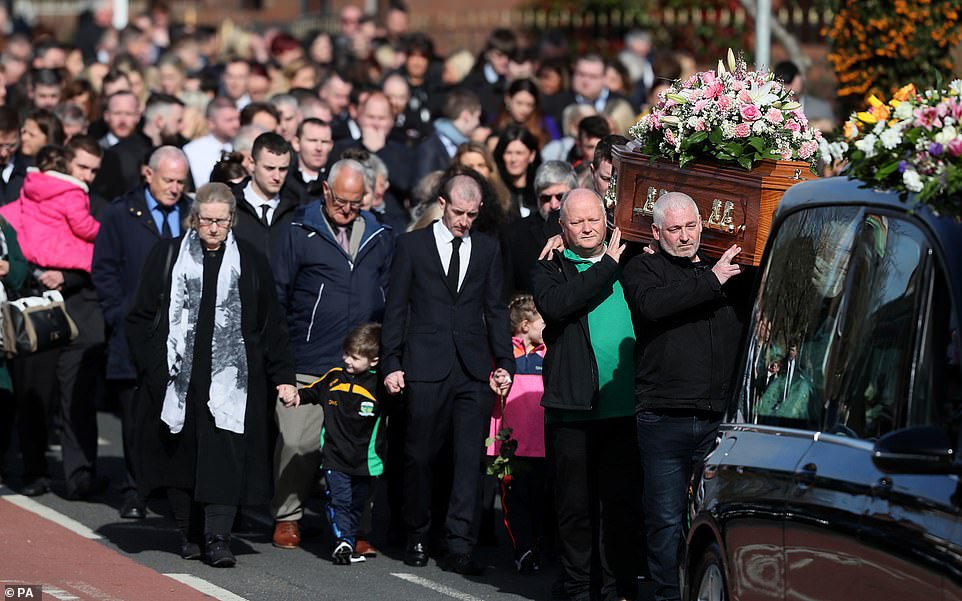 Friends have described her death as a tragic accident, while her partner paid tribute to her.

A number of bouquets of flowers were carried by members of the RNLI, while a bouquet that spelt out ‘Friend’ was driven in the hearse.

A guard of honour made up of children and adults from Ms Maguire’s local GAA club, Bryansford GAC in Newcastle, County Down, Northern Ireland where she volunteered as a coach, stood outside the church.

During the service, mourners heard how Ms Maguire, who is originally from Belfast, worked in Daisy Hill hospital in Newry.

Despite being the baby of the family, she was ‘the boss’ who looked out for her sisters and brothers.

The priest told mourners Ms Maguire dedicated her life to others, through her job as a carer, coaching sport and Irish dancing. 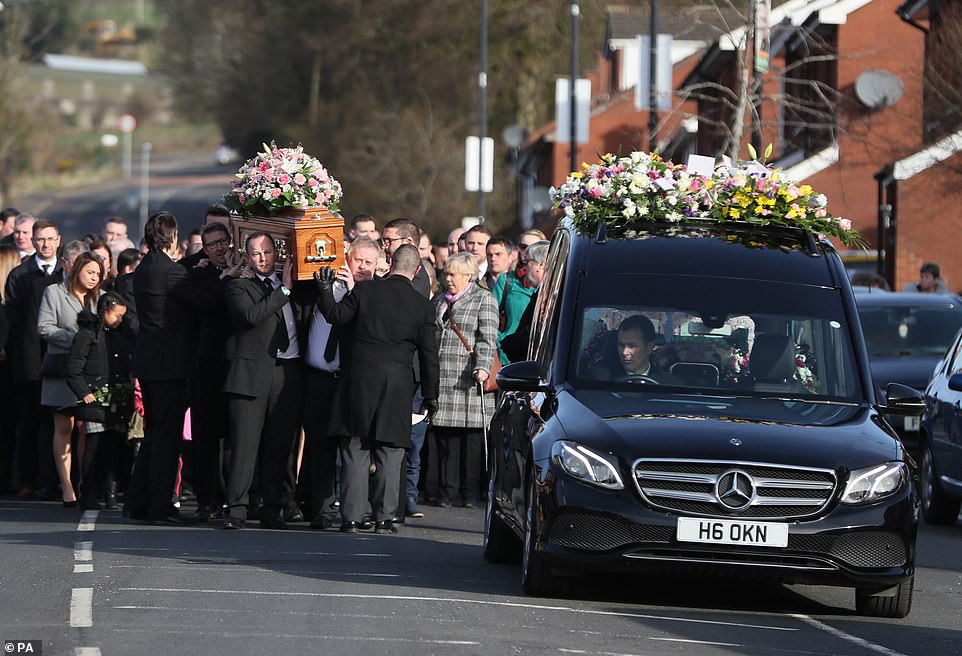 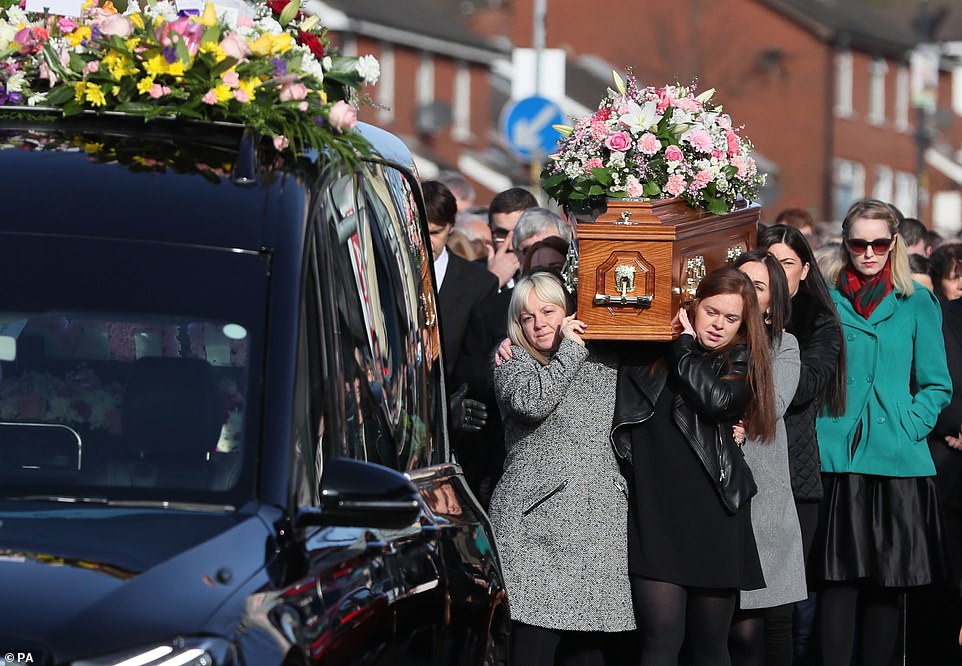 At the service, the priest told mourners Ms Maguire dedicated her life to others, through her job as a carer, coaching sport and Irish dancing 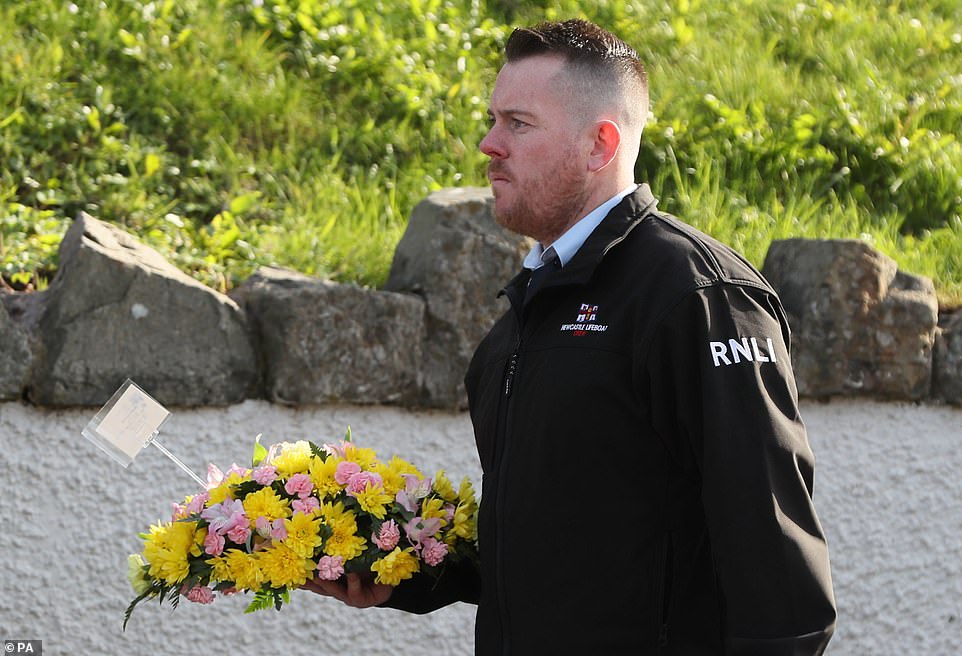 He said: ‘Ruth was slow to take offence and quick to forgive, she realised that life is too short.

‘May she meet you Jim in God’s kingdom, dressed in dazzling white,’ the priest added.

Speaking to her three children, the priest said: ‘Don’t you ever think that because you’re wee your prayers aren’t powerful. God listens to your prayers so carefully, you remember that.

‘Today, remember your mummy loved you so very much, and your prayers will help you on life’s journey, she was so proud of you, and you’ll have so many people around you to help you. 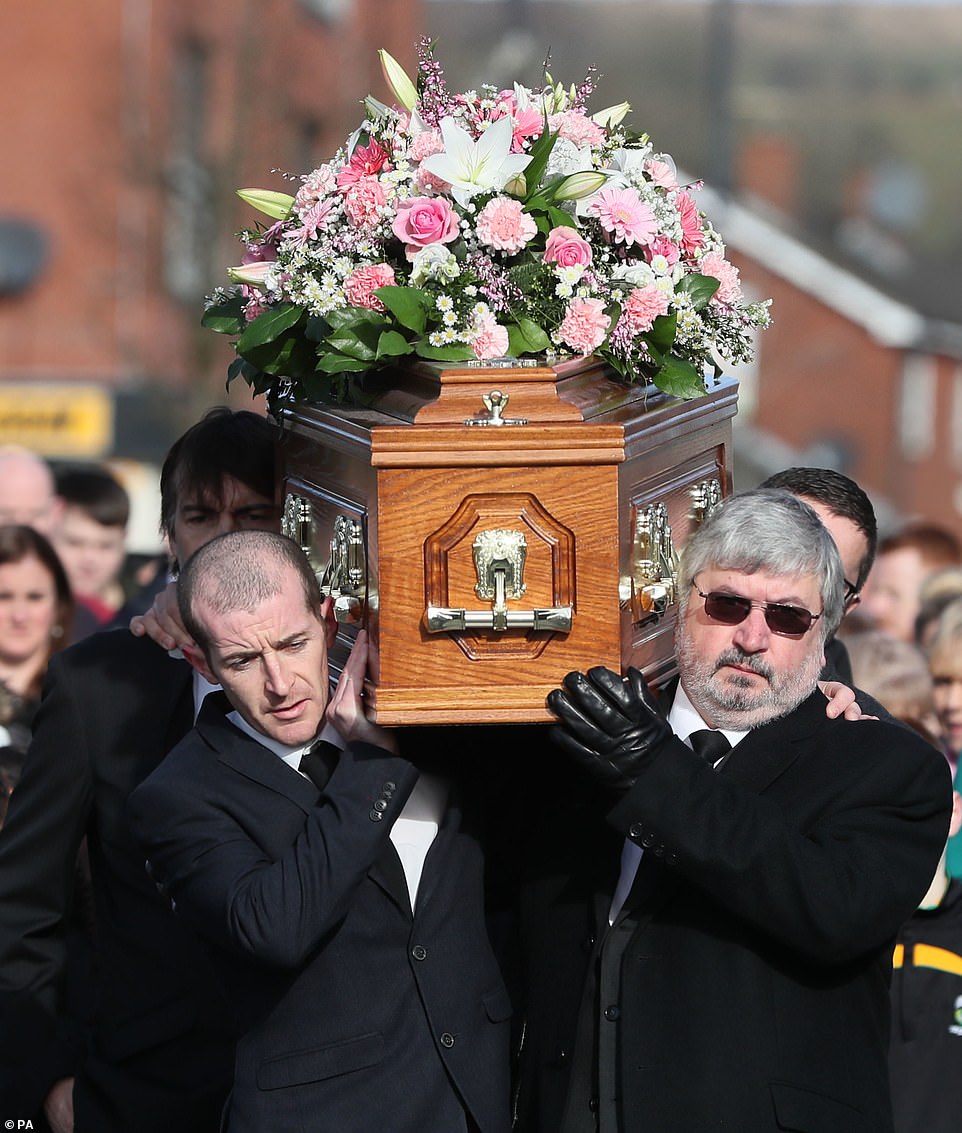 During the service, the priest said that, despite being the baby of the family, she was ‘the boss’ who looked out for her sisters and brothers 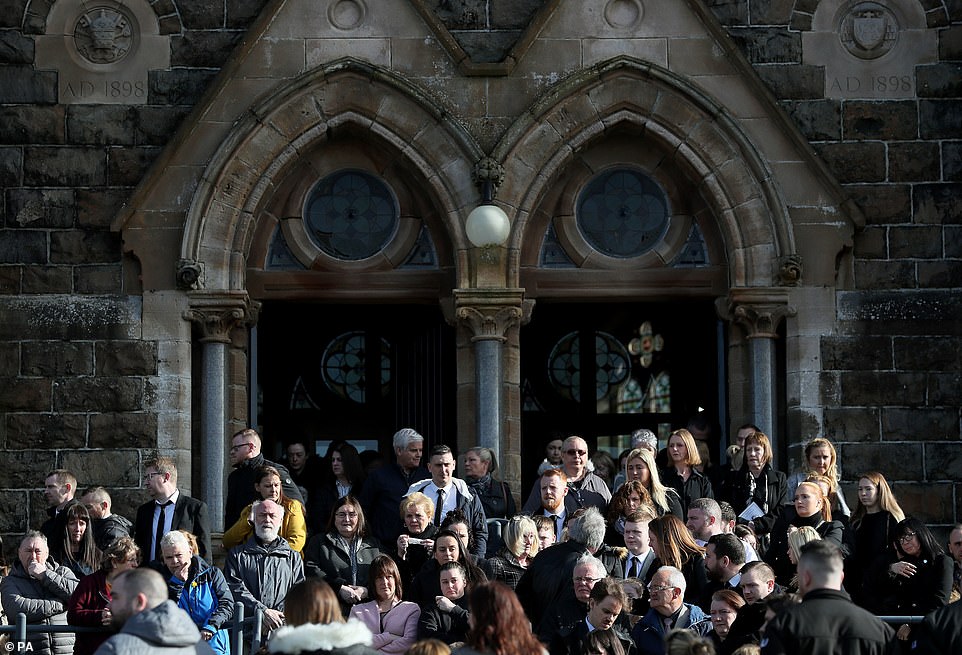 A card made by her young son for Mother’s Day next week has taken pride of place in their home with the many sympathy cards sent by the local community.

Friends have described Ms Maguire as ‘the most loving, hardworking and caring mother to her three beautiful children’ who, along with her partner, ‘worked tirelessly to give their children the best that they possibly could in life’.

Speaking after her body was recovered on Monday, her fiancé James Griffin paid an emotional tribute, writing on Facebook: ‘Ruth wasn’t just my partner, she was my soul mate. Stay safe love always James and your three beautiful children.’

In an interview with the Belfast Telegraph, Ms Maguire’s older sister Rachel Wilkinson called the mother of three a ‘beautiful person who had everything to live for’, before adding: ‘We are going to let her wear her wedding dress in the coffin.’

Mr Griffin spoke to Ms Maguire at around 7.30pm on Saturday, when she seemed happy and not drunk, Ms Wilkinson said. 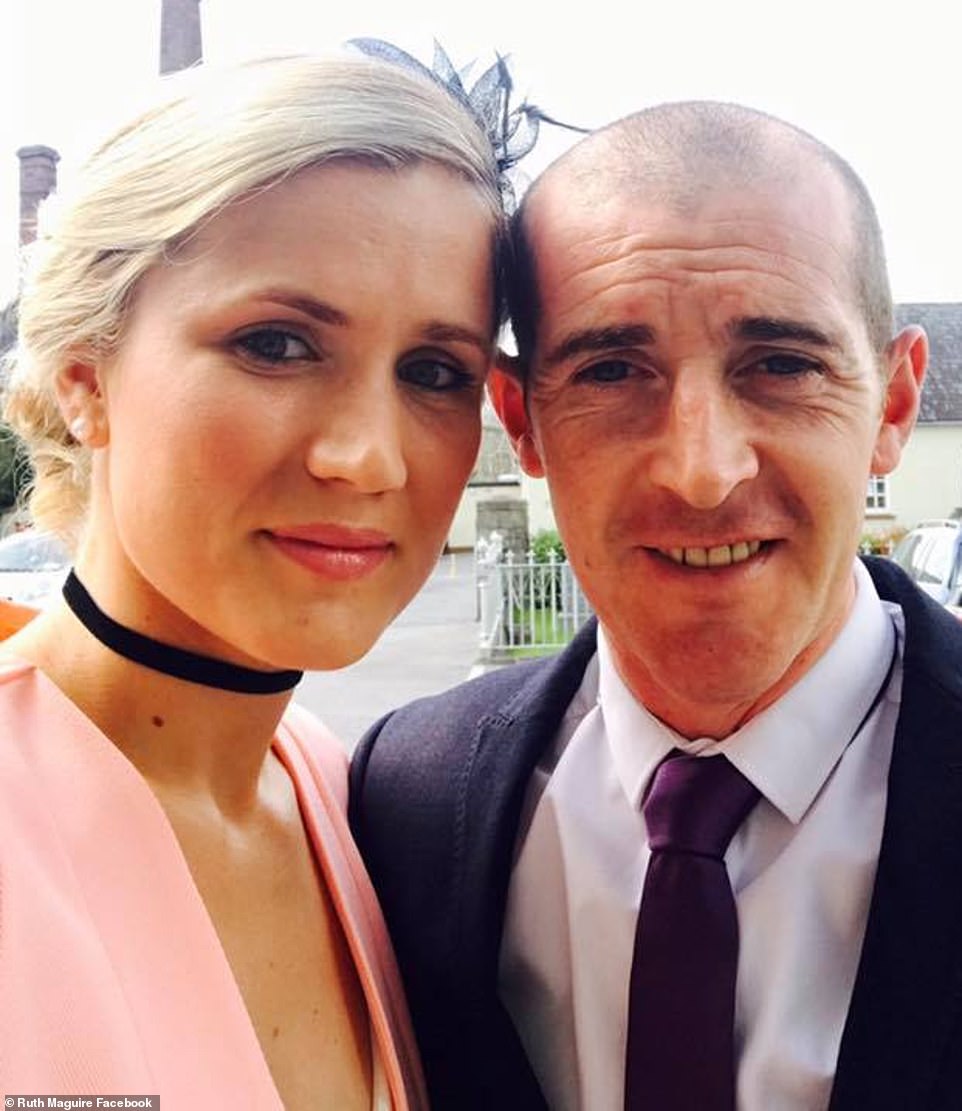 Ruth pictured with her partner James Griffin. She was last seen at around 11.30pm on Saturday. Her partner paid tribute to her following the discovery of her body 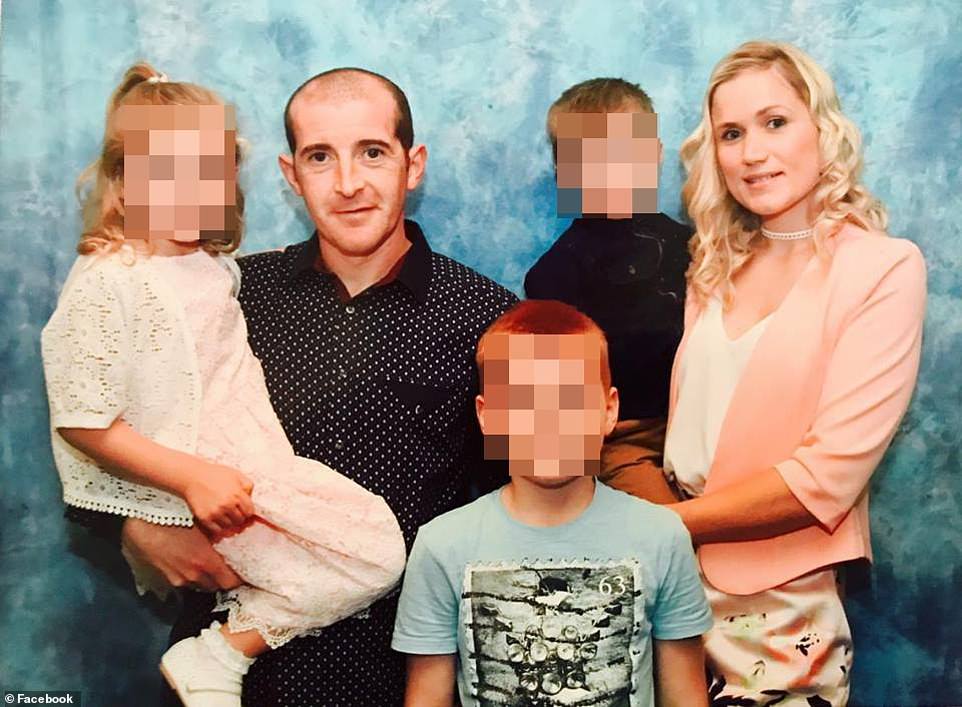 Ruth with her partner and three children. The nurse, originally from Belfast, was on a hen do with friends when she disappeared 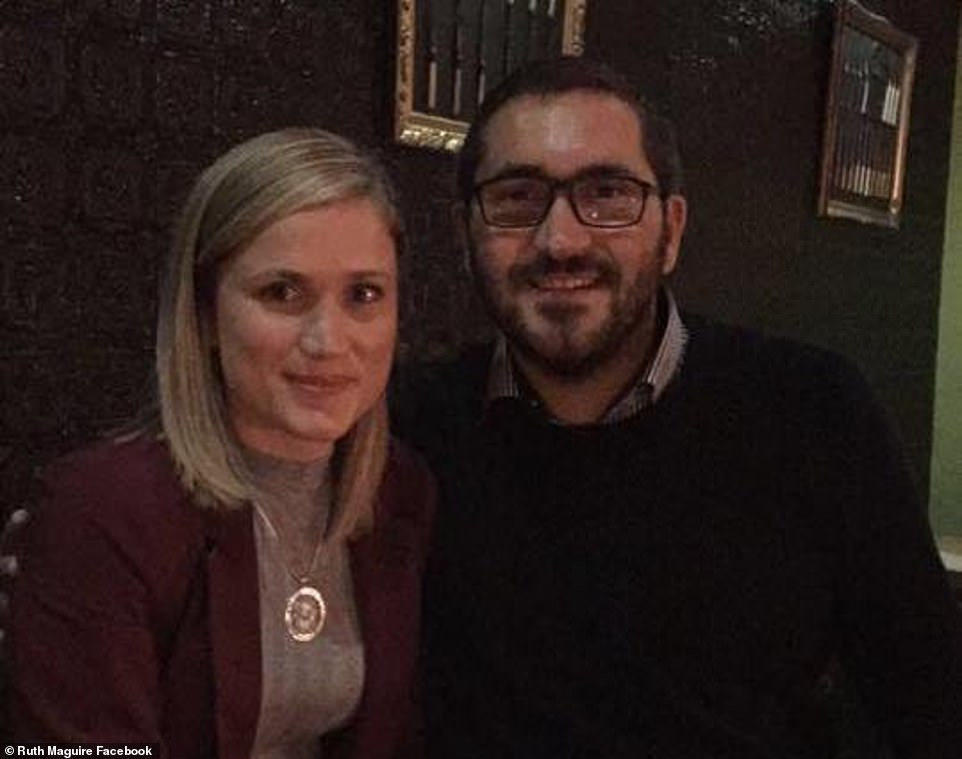 Ruth and her brother Ryan Maguire. Ruth’s friends began the search for her immediately

She said people on the hen do left the pub at various times and her sister might have taken the wrong exit and lost her bearing. CCTV showed her walking towards the water of Carlingford Lough, a large bay which opens onto the Irish Sea.

Ms Wilkinson said the family knew something was wrong when they heard Ruth had not come home.

‘He knew there was something drastically wrong immediately,’ she said.

Ms Maguire, who lived in Newcastle, County Down in Northern Ireland, had rented a property for the weekend with friends just five minutes’ walk from Taaffe’s.

At some point on Saturday night she is believed to have told a doorman she intended to walk home to Newcastle, and at around midnight she posted a photo on Instagram with the Lough in the background.

By 11.30pm, the rest of the hen party were back in the house and realised Ruth was not with them.

The nursing assistant’s friends started searching for her immediately upon realising she was missing.

They then raised the alarm, prompting a much wider search by police, coastguard and members of the public.

Ms Maguire was due to marry James, her partner of 12 years, in August, according to reports. The couple had three children: Tyler, 10, Lydie, 7, and Oliver, 5.