A mother who broke her spine during labor and was left in such horrendous agony that she contemplated suicide has managed to walk down the aisle at her wedding after undergoing ‘life-saving’ surgery to repair the damage to her back.

Elizabeth Smith suffered a serious fracture to her tailbone and two herniated discs in her spine during the traumatic birth of her first child, Sawyer.

The 32-year-old, from Ontario in Canada, had a happy and healthy pregnancy but during labor, a series of medical complications meant that she was left in unbearable pain and unable to move without help.

During the birth of her son, Elizabeth was left in horrific agony, and after Sawyer had been safely delivered, she spent a further 18 months battling debilitating back pain that nearly pushed her to suicide – and saw her begging doctors to perform surgery in the hopes that she might finally experience some relief.

Emotional: A bride who broke her back while giving birth to her first child has proudly revealed how she walked down the aisle at her wedding, despite thinking she’d never walk again 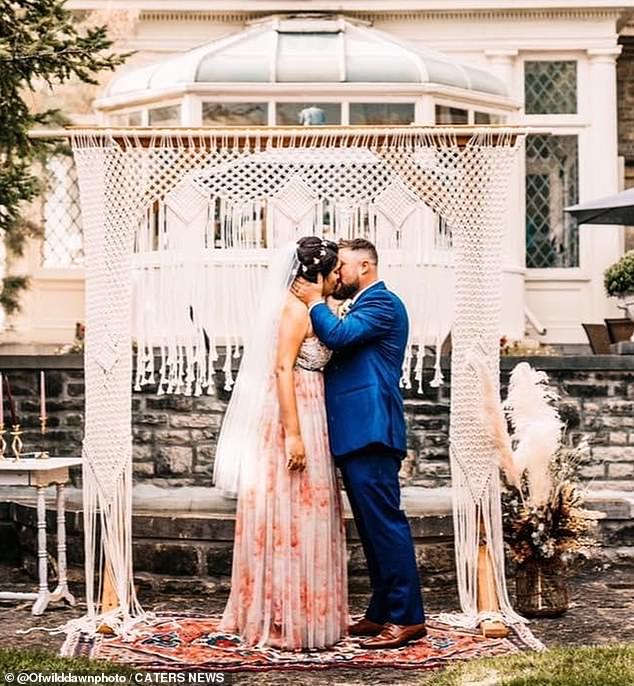 Poignant: Elizabeth Smith, 32, from Canada, suffered a tailbone fracture and two herniated discs while delivering her son Sawyer, and her injuries left her in agony for months on end 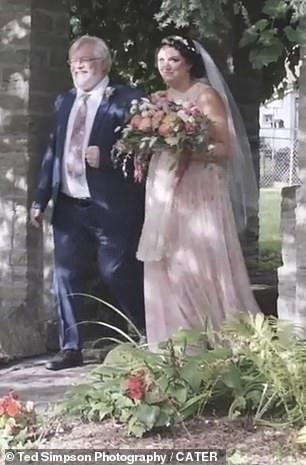 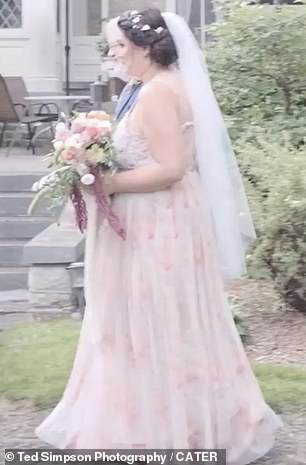 On the move: The proud mother begged doctors to operate on her spine for more than a year, after the pain left her unable to move or walk, and saw her forced to rely on others for childcare

The day care owner, who says she experienced a relatively normal pregnancy, was left unable to move or walk without suffering horrific pain following Sawyer’s birth – and the agony saw her forced to rely on others to help her with everything, including the care of her newborn son.

‘For so long after Sawyer was born, I couldn’t walk more than from my bed to my couch without crying,’ she recalled.

‘I was bent in half and people forgot how tall I was as I was hunched over.

‘I went into labor feeling fine but I left in agony. It took four attempts for doctors to give me an epidural in my spine, but I could still feel everything and I stayed at 9cm for hours.’

According to the newlywed, doctors still don’t fully understand exactly what happened to cause such trauma during Sawyer’s birth, with Elizabeth revealing that his head got stuck during labor, forcing them to use a vacuum to safely deliver him.

‘Doctors truthfully don’t know exactly what happened,’ she said. ‘His head got stuck and they used a vacuum to get him out. It was a very distressing, prolonged period of time.’

Following the birth, her pain failed to subside, and it was later revealed that she had suffered a tailbone fracture and two herniated discs during the birth, which left her unable to even sit down without experiencing unbelievable pain. 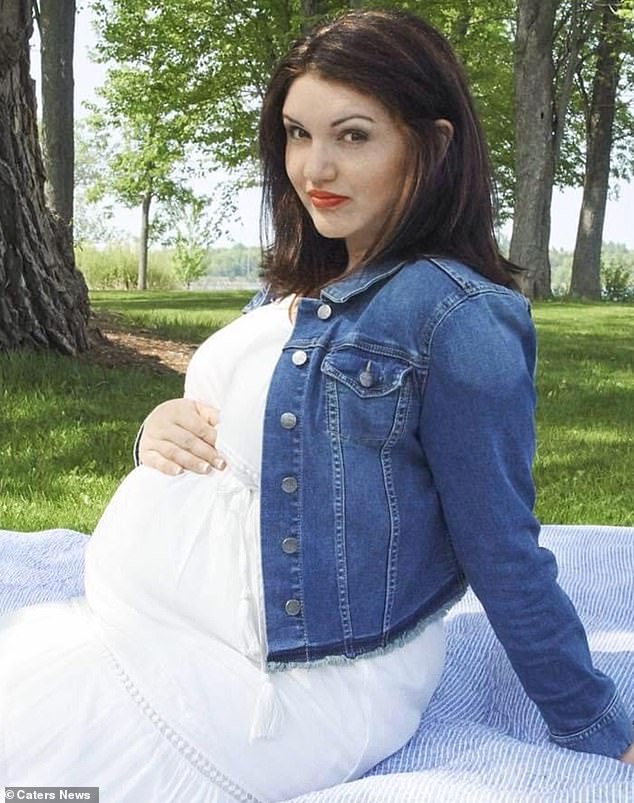 Shock: Elizabeth says she experienced a relatively normal pregnancy however complications during the birth resulted in horrific injuries 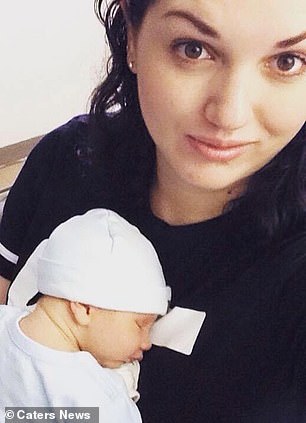 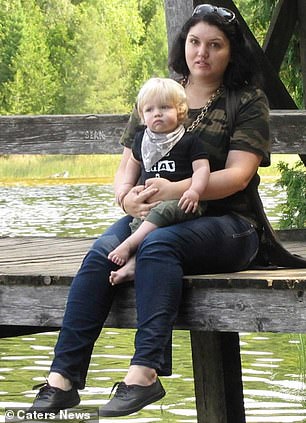 Day by day: ‘I was in an horrendous amount of pain, but I was a new mom, I didn’t know what was normal after delivery and my priority was my baby’s health,’ she said 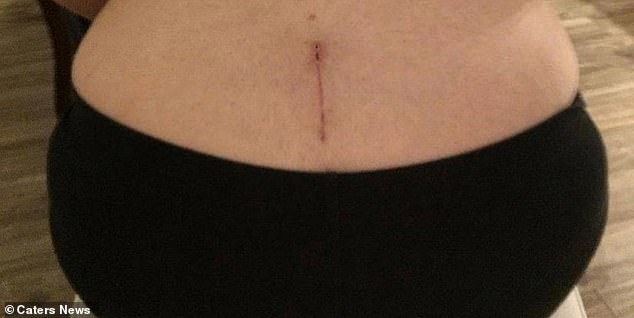 Finally: Initially, doctors refused to operate on Elizabeth for more than a year because they felt that she was too young to undergo back surgery and insisted it would ‘ruin her life’ 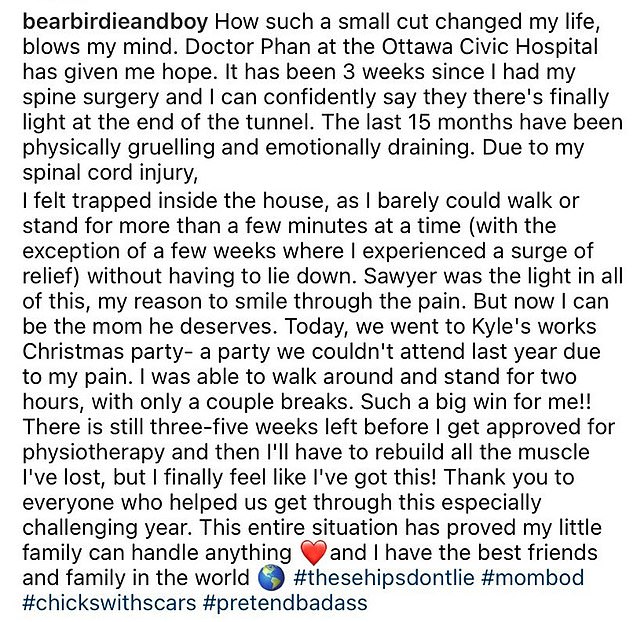 Moving forward: She was finally put on a waitlist for an emergency spine operation 13 months after giving birth and now says the procedure ‘saved her life’

Initially, Elizabeth thought that her condition was something that many new mothers experienced, noting that, as a new mother, she didn’t ‘know what was normal’ after birth – and at her six-week postpartum check, she was informed by doctors that she was suffering from sciatica, which could be cured with physical therapy.

‘I was in an horrendous amount of pain, but I was a new mom, I didn’t know what was normal after delivery and my priority was my baby’s health,’ she said.

Elizabeth says she ‘tried everything’ to treat her pain – which felt like ‘someone was constantly stabbing her in the spine’ – but found that nothing could provide her with any relief, so she began asking doctors to perform a corrective procedure on her back, only to be told that she was ‘too young’ for that kind of operation.

‘I was desperate for corrective spinal surgery where they shave the discs down so they are no longer impinging on the nerve which was causing me the most agony,’ she shared.

‘I tried everything but the pain was getting worse. I felt like someone was constantly stabbing me in the spine. I asked for an operation but I was told no and I continued to ask for over a year but I was told that back surgery would ruin my life.’

To make matters even worse, some of the medications that Elizabeth tried made her pile on weight, and she was forced to spend thousands of dollars on physical therapy.

‘Some medication caused me to gain 25lbs in two weeks, it was horrible. I spent thousands of dollars on therapy but I knew the answer was surgery, I needed surgery to survive,’ she said. 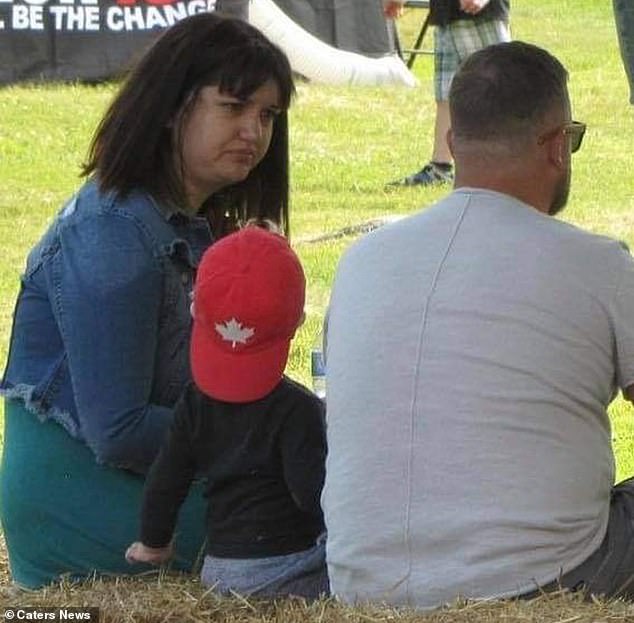 Agony: Before the surgery, Elizabeth couldn’t do basic everyday tasks, and she was unable to properly care for her son, which left her struggling with horrific guilt 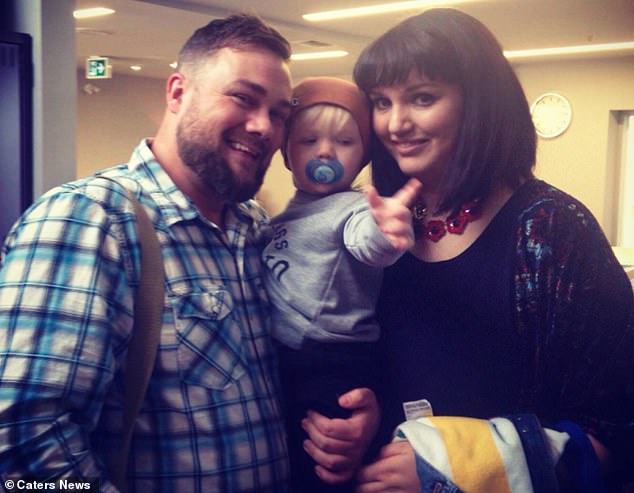 Making the most of things: She had to rely on her now-husband Kyle, 37, and her parents for help with almost every aspect of her daily life 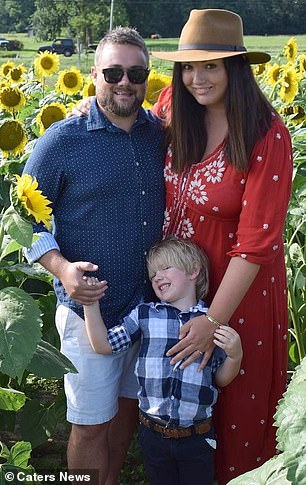 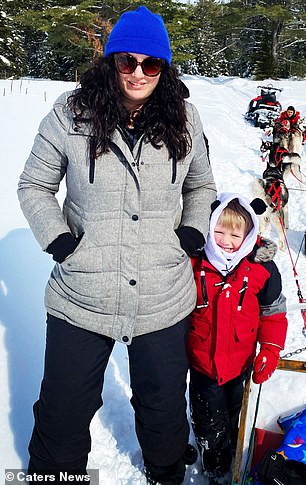 At last! Although her post-surgery recovery has been slow, Elizabeth says she is now able to do so much more than she ever thought possible

The painful condition also began taking a serious toll on her mental health and left her struggling with feelings of guilt over her inability to properly care for her son.

‘I couldn’t pick my son up, for the first year he was raised by my parents, I could barely hold him, my back wouldn’t take it so I couldn’t be alone with him, I would cry with the pain,’ Elizabeth explained.

‘My mom would come over and get me up, get me ready, help to dress me, my parents, brother and husband would take it in turns to look after me throughout the day.

‘It wasn’t that I just couldn’t walk- people can learn to adapt to that, but it was a constant overwhelming pain.

‘I honestly didn’t think I would survive it. It completely devastated me, I was a strong person but it was killing me. I just wanted to live my life, be a proper mom but I couldn’t function.

‘I was slowly losing myself. I had no life at all, I was letting him down because I couldn’t be the mom he deserved and I hated the guilt that came with that.’

Elizabeth lost all hope of every fully recovering and says the constant pain left her feeling suicidal – until she was finally given the go-ahead by doctors to undergo the surgery that she had been begging for.

She was placed on a waiting list for five months, and eventually went under the knife when her son was 18 months old.

‘I finally felt heard. It was agreed I needed emergency spine surgery,’ she recalled. ‘I burst into tears as I was given a surgery date, it saved my life.’ 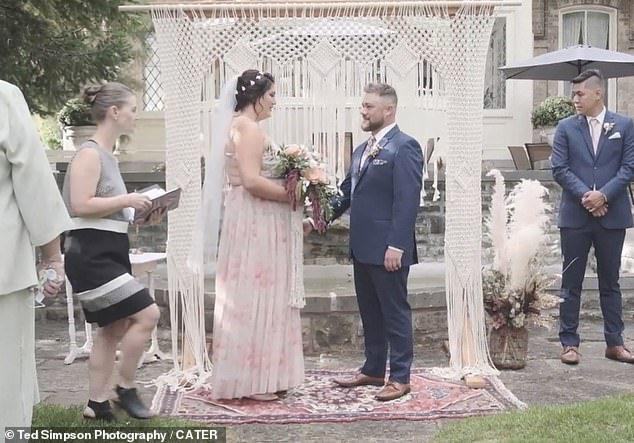 Meaningful: One of the most important goals that Elizabeth has achieved was walking down the aisle at her September wedding to Kyle 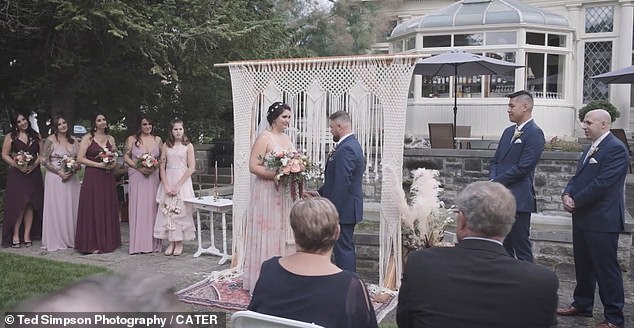 Important: ‘It felt amazing to finally get to celebrate us as a couple because so much focus had been on me being ill and us being new parents,’ she said 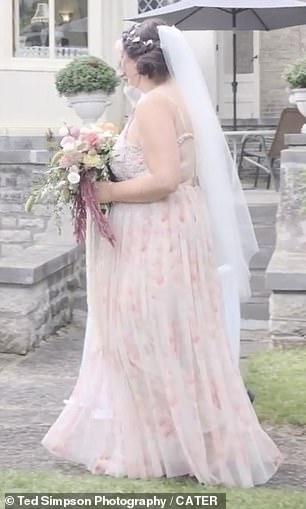 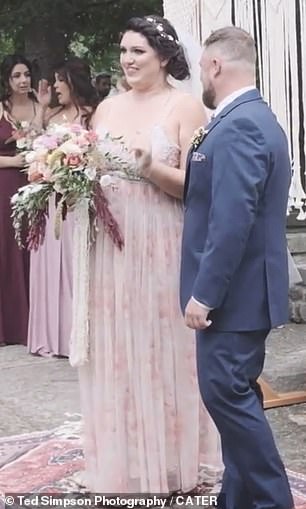 Support system: Elizabeth praised Kyle for supporting her throughout her recovery, noting that she ‘doesn’t think many men would have stuck around’ 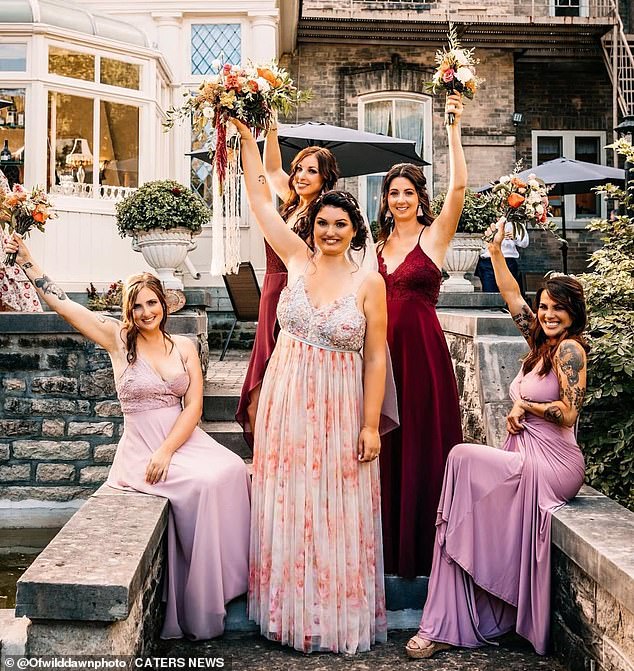 Hurrah! ‘We finally just got to be a normal couple who didn’t have the weight of chronic pain on our shoulders and the devastating effect that had on our family,’ she said

Although her post-op recovery has not been easy, Elizabeth has regained some of the freedom that she enjoyed before her son’s birth – and in September last year she was able to walk down the aisle at her wedding to husband Kyle, 37, something that she hadn’t thought would ever be possible.

‘I honestly wasn’t sure we would make it as a couple or ever have a wedding day when I was sick. I couldn’t imagine anyone wanting to be with someone so miserable and unable to participate in the most basic day to day things,’ she said.

‘It felt amazing to finally get to celebrate us as a couple because so much focus had been on me being ill and us being new parents.

‘We finally just got to be a normal couple who didn’t have the weight of chronic pain on our shoulders and the devastating effect that had on our family.

‘My dad walked me down the aisle. Our ceremony only had 32 guests, it was extremely intimate. I think almost every single guest had a tear at some point because everyone there felt very connected to our journey.’

Elizabeth also credits her now-husband Kyle, 37, who popped the question in October 2019 after she underwent her procedure, with helping her to get through the horrific ordeal.

‘I don’t think many men would have stuck around. I couldn’t cook, clean, work or look after our son. Kyle works in HR for international defense and he is my world,’ she said.

‘My dad is my biggest supporter, he is my best friend and it meant the world to both of us for him to be able to walk me down the aisle.

‘It has been amazing to be able to do it because I didn’t want to be someone who hides in the house. I didn’t see my friends because I was so embarrassed by the pain and it made me unrecognizable, family and friends could see it etched on my face.’