A brave bride suffering from breast cancer shared a powerful image of herself with a shaved head on her wedding day to encourage other women to check themselves for lumps.

Mother-of-two Sarah was diagnosed with the illness on December 7 last year and was due to marry in late spring this year.

She and her now husband Rob Vaughan, 44, decided to bring forward their wedding to January 6 as she was unsure how she would be feeling due to chemotherapy.

The 43-year-old teacher was hoping to still have her glossy locks for the wedding but just four days before the big day her hair started to fall out.

She then made the brave decision to shave it all off and bought a wig she dubbed ‘Brittany’ to wear on her special day. 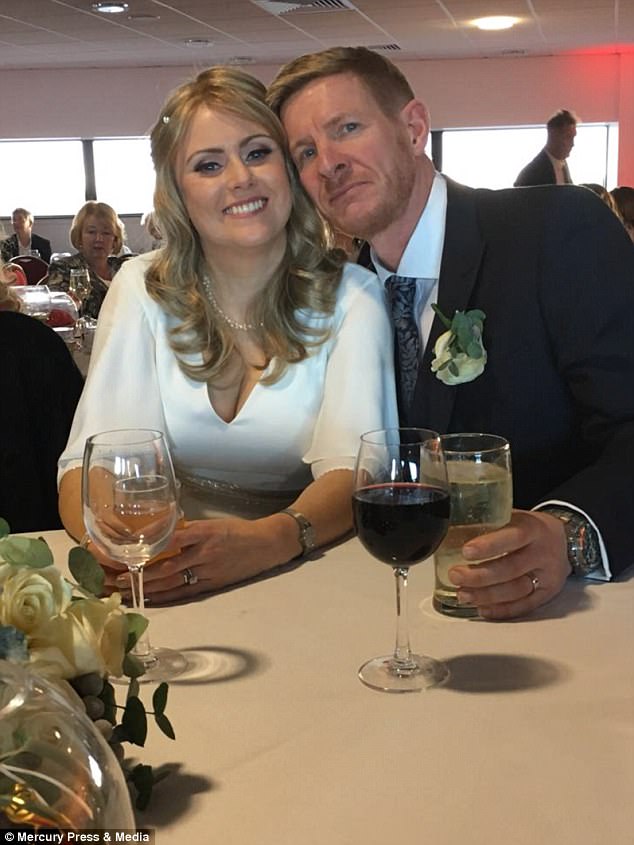 The couple, pictured on their wedding day, with the mother-of-two wearing a wig after her hair fell out just four days before the big day 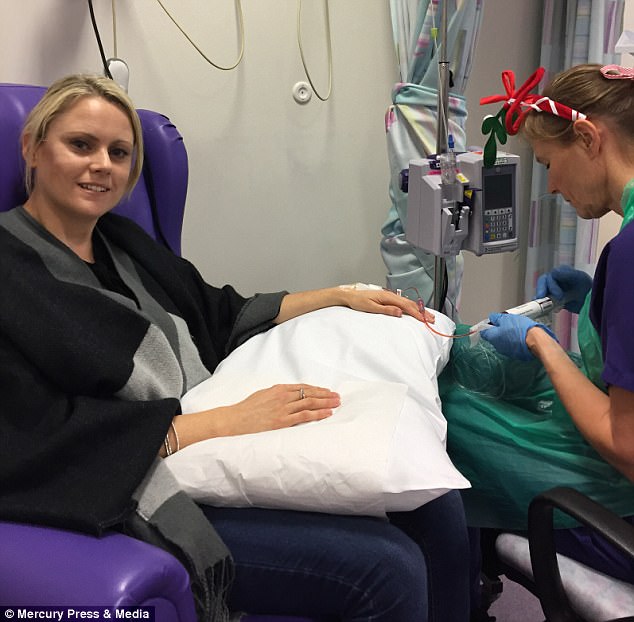 ‘It made me feel so empowered’

On the morning of the wedding Mrs Vaughan took a photo of herself without her wig on and shared it online to encourage others to check themselves for lumps.

She said: ‘I really didn’t want to wear the wig but knew in the days leading up to the wedding that it was my only option.

‘Lots of people on the day said they didn’t even know it was a wig but as the day went on I just wanted to take it off as it was hot and itchy after such a long time.

‘When I did take it off on the dance floor everyone clapped and embraced the moment. It was a very special day.

‘On the morning of the wedding I took that picture and I decided to share it online.

‘It made me feel so empowered. I just wanted to make people more aware and get people to check for lumps.’ 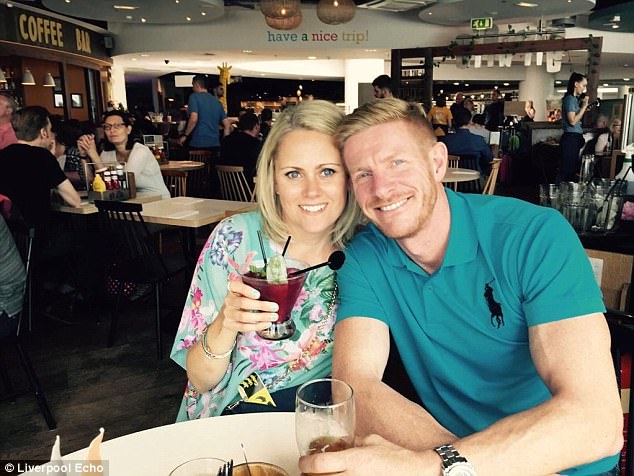 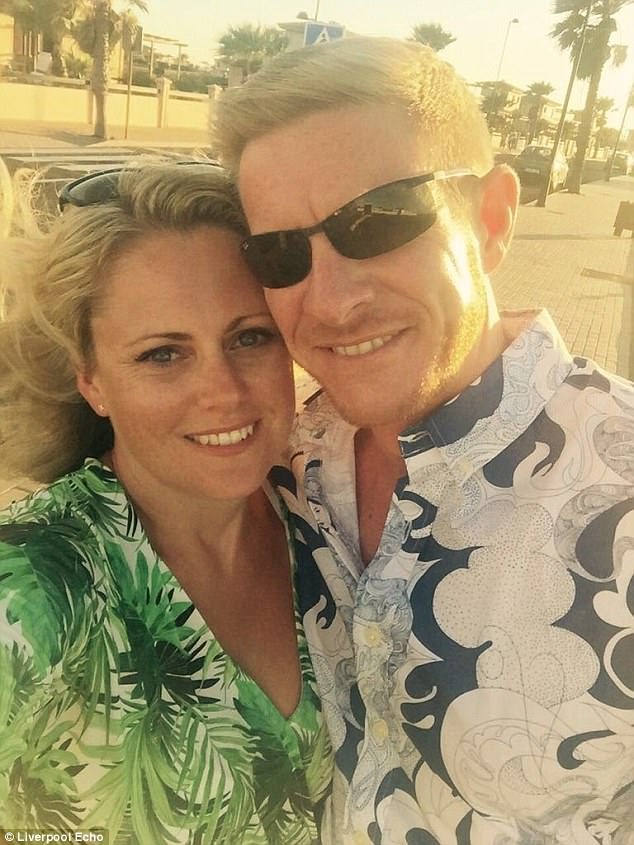 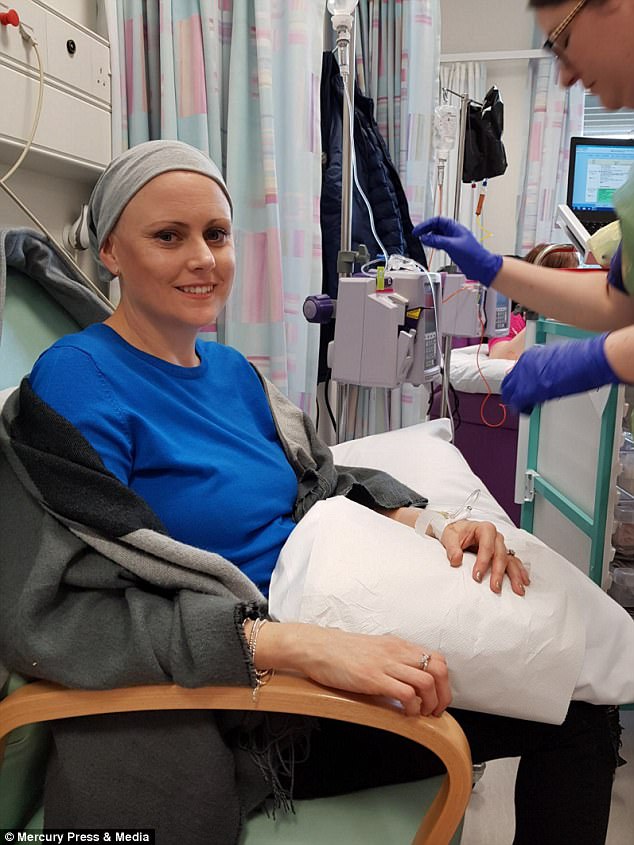 ‘I don’t miss my hair but my head is cold, it’s like going outside in the winter with wet hair,’ said the 43-year-old

‘It was coming out in handfuls’

Mrs Vaughan, from St Helens, Merseyside, shared her photo on social media, with a post which read: ‘So I’m feeling brave after my wonderful wedding yesterday.

‘Unfortunately, my hair didn’t make the guest list as it was coming out in handfuls.

‘I shaved it off after hacking it away with scissors (by then it was a tatty ball on my head anyway) this was Thursday so I had a few days to get used to wearing my wig before the big day.

‘I took this picture before I put ‘Brittany’ (the name of my wig) on before going to the ceremony. I felt empowered and wanted to share with you.

‘I don’t miss my hair but my head is cold, it’s like going outside in the winter with wet hair.

‘I’ll be experimenting with headwear but you’ll also see me bald and proud. #nohairdontcare’

Mrs Vaughan was diagnosed on the day before she was due to move house with Mr Vaughan, who she has been with for a year and got engaged to in October last year. 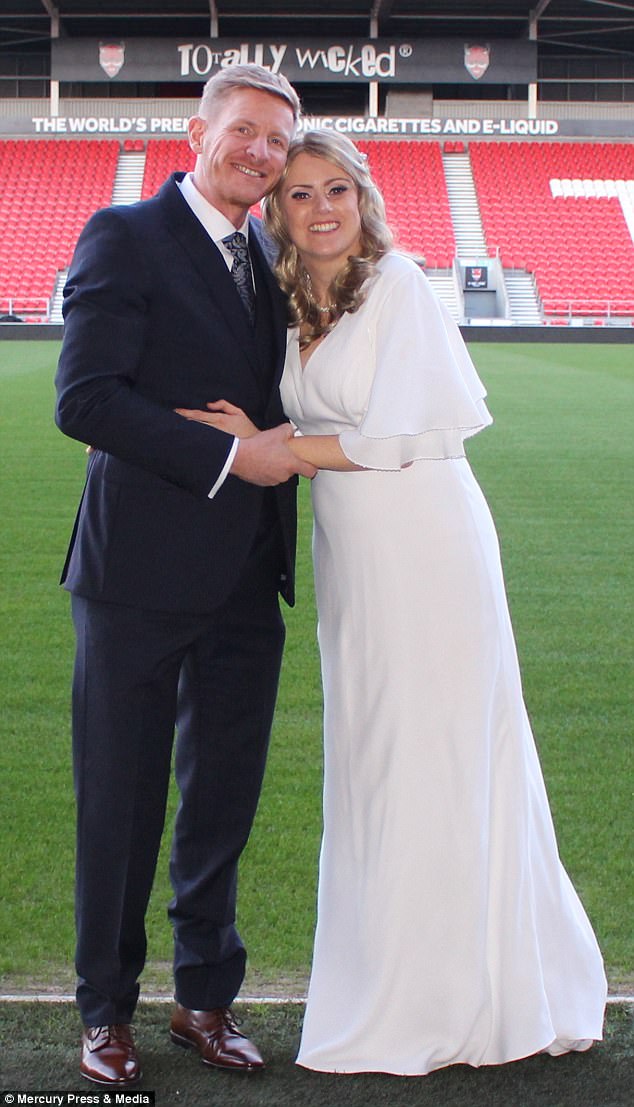 Around 55,200 people are diagnosed with breast cancer in the UK each year. One in eight women develop the disease during their lifetime.

The illness can cause a number of symptoms, but the first noticeable symptom is usually a lump or area of thickened breast tissue.

Most breast lumps aren’t cancerous, but it’s always best to have them checked by your doctor.

According to NHS Choices you should also see your GP if you notice any of the following:

Since her diagnosis, she has set up a Facebook group called ‘first of the month check for a lump’ to remind everyone to check their bodies more regularly.

She said: ‘It was a shock when I got the diagnosis. I thought I was really good at checking because I’ve had lumps before that have been benign.

‘But when I looked back I couldn’t remember the last time I checked and that’s when I thought, “we need more of a reminder”.

‘It is just about being aware of your own body. I think we are a bit shy especially as Brits. We need to be aware so if there are any changes you can act on it.’

‘I have got a lot to be thankful for’

Mrs Vaughan is waiting on MRI results to see what stage the cancer is but is feeling positive.

She said: ‘Since making the Facebook page I have had a lot of messages from people saying, “well done. I think you are awesome”.

‘I’ve had people thanking me saying they have found a lump which they would have never found if it wasn’t for my post. A lot of people have said they never check but now they do.

‘I have also had messages from people who are going through something very similar.

‘I do feel very lucky because the treatment is amazing. I have had a lot of fantastic support. Rob has been amazing. I have got a lot to be thankful for regardless of the diagnosis.’