Bridesmaids and wedding guests share their most insane bridezilla requests

It’s perfectly normal for brides to feel stressed leading up to their wedding day.

Couples spend months meticulously planning what’s meant to be the most happiest day of their lives – so what could possibly go wrong?

Well according to these unfortunate people, they have had to come face-to-face with over-the-top bridezillas who have taken it too far.

Here, bridesmaids and wedding guests have shared their most outrageous requests they have received from demanding bridezillas.

Australian woman Chloe* was due to give birth at any moment.

And to add more stress to her pregnancy, she was expected to walk down the aisle as a bridesmaid at a wedding in a couple of weeks time.

‘[The bride] has asked me to be induced so I can have my baby and be “bridesmaid” ready,’ Chloe told Mamamia.

‘At this stage I’m going to have a bloody two-week-old screaming as I was down the aisle with milk leaking from my boobs, that is if I can walk properly by then.’

Louise* was out celebrating on a hen’s night when the bride-to-be cheated on her future husband just weeks before tying the knot.

Everyone at the bash, including the groom’s sisters, were sworn to secrecy.

‘If that’s not a ridiculous request, I don’t know what is,’ Louise said.

Melissa* shared a story about the wedding her cousin was invited to where the bride made the most ridiculous demands from their guests.

‘The bride was an Australian woman that none of the guests even liked and she insisted that everyone make their own special surreal headpieces for the ceremony,’ Melissa said.

‘So basically everyone had a big job trying to invent and make the headpieces in the run up to the wedding. There was a huge fuss about the whole thing by the bride who made a Facebook group and kept posting to it with a FAQ section and a list of ‘rules’ for the day.

‘They didn’t even serve anyone wine, in fact nobody was allowed to get a drink before the “ceremony” started and the bar was on lockdown until they got the okay from this bride.

‘The wedding was in Ireland, and that’s not cool with the Irish. Then, a few weeks after the wedding, the bride went totally mental in a big rambling online post about the lack of presents they got and threatened to name and shame people who hadn’t given them a present or money yet.

‘She even sent cards to a person who hadn’t given a present yet saying thanks for the present in a really passive aggressive way.’ 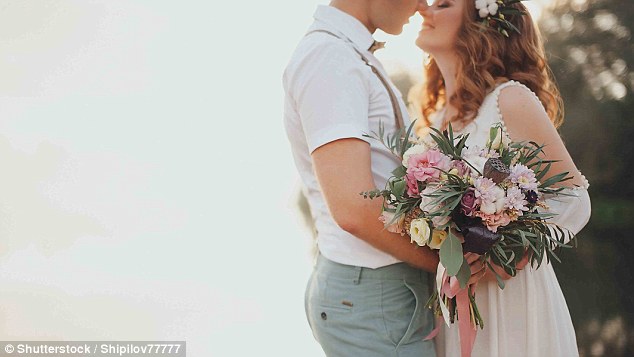 Couples spend months meticulously planning what’s meant to be the most happiest day of their lives – so what could possibly go wrong? (stock image)

Todd said he was asked by the groom to “keep an eye” on his tuxedo for any signs of dandruff on his wedding day.

‘He had a bad case of dandruff at the time. I told him to choose a light-colored tux, but the bride insisted the guys wear black – a color that, of course, showed every particle of dandruff,’ he said.

‘So I placed a small brush in my pocket, and every so often would “dust him off” as discreetly as possible throughout the day.’

And in a slight twist, a bride came forward to share a ridiculous request she received from one of her guests.

‘I’m the bride. I had told people my wedding date almost a year ago,’ she said.

‘One of my friends messages me a few months ago asking me if I could change my wedding date, because another of her friends just set her wedding date for three weeks before.

‘She told me it’d be great if she could attend both of our weddings in one trip.’

The horror stories come just days after a disgruntled bride, known only as ‘Susan’, cancelled her extravagant wedding after her guests refused to pay $1,500.

‘I specifically, I mean specifically asked for cash gifts. How could we have our wedding that we dreamed of without proper funding?’ she said.

‘We’d sacrificed so much and only asked each guest for around $1,500. We talked to a few people who even promised us more to make our dream come true.

‘Our request for $1,500 for all other guests was not f***ing out of the ordinary… If you couldn’t contribute, you weren’t invited to our exclusive wedding.’