A hen party reveller has told of her anger after a ‘jobsworth’ council worker gave her a £75 fine for dropping a cigarette butt down a drain.

Kate Walker said she threw the butt in the drain when she couldn’t see a bin while stood on the pavement in Brighton city centre to smoke on Saturday afternoon during a weekend of celebrations for her friend’s wedding.

Mrs Walker, 31, a call centre worker, from Bristol, told MailOnline how she hesitated because she ‘hated just putting it on the ground’.

She said: ‘I saw a drain about five metres ahead of me and decided surely it was better putting it down the drain instead of leaving it on the floor.’

But she claimed that a female council worker watched her dispose of the butt and approached her afterwards.

‘I turned around and the next thing I knew I had someone in my face telling me I was being recorded and she was an environmental officer for Brighton Council and I had committed a littering offence,’ she said.

‘She gave me a £75 fine and gave me a printout receipt on the spot. After that, she decided to point out that there was a bin hidden around a corner from where I was, which I clearly could not see. 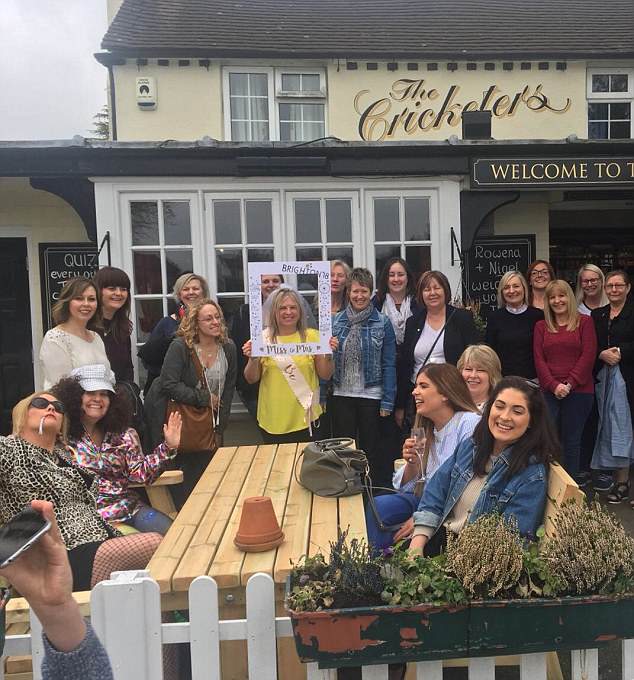 Mrs Walker, 31, a call centre worker from Bristol, threw the butt in the drain when she said she couldn’t see a dustbin as she stood on the pavement in Brighton city centre to smoke at on Saturday afternoon during a weekend of celebrations for her friend’s wedding (pictured)

‘I explained that I was not from around here and I wouldn’t know where a bin was but I had been clearly looking for one. I have a fused back and am unable to bend very well.

‘She started reading me my rights, the whole ‘anything you say may be used in evidence’, etc. I felt completely intimidated. I was so angry and upset.’

Her friend Carolyn, 49, a senior healthcare assistant from Maidenhead, was celebrating her upcoming wedding with Ms Walker and other friends. 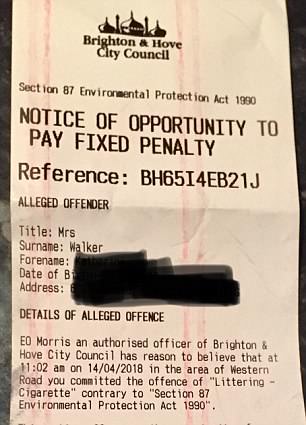 Carolyn, who argued with the official, added: ‘It ruined my hen weekend. It happened on Saturday and we had only travelled up on the Friday night. Kate had already paid up for the weekend and now she was slapped with a £75 fine.

‘It felt so unfair because the council worker was clearly watching her and looking for an opportunity to strike. I cried. I did have a few tears. It made me feel bad and really put a dampener on my hen weekend.’

The council worker, she said, ignored the women’s appeals. ‘I begged her not to ruin my hen weekend but she totally ignored me,’ Ms Hayward said. ‘She was not a nice lady, very grim. She came across as if she couldn’t give a damn.’

Mrs Walker and Ms Hayward – who had enjoyed a modest celebration with a highlight of cocktail-making – said they were left upset after the incident.

The final irony, Mrs Walker said, was that the bin pointed out by the council worker was not fit to hold cigarette butts.

‘The ashtray on top of the bin didn’t have a bottom to it so if the butt wasn’t put out properly, it would have gone straight into the bin and set it on fire,’ she added.

A council spokesperson said: ‘The city council has a duty to our residents, businesses and tourist to keep our streets, and in this case drains, clean and litter free.

‘Throwing cigarette butts on the ground or down a drain is illegal and the council is carrying out the law when it fines offenders.

‘There are six bins within 20 feet of the H&M shop and this person, who has paid her fine and hasn’t complained to the council, could have easily disposed of the cigarette in any of these bins. A recent survey carried out by the council shows the vast majority of our residents support fines for littering.’

The spokesman added: ‘Our enforcement officers do not ‘spy’ or ‘pounce’ on people, but carry out their lawful duties if they see an offence being committed.’