A 51-year-old man was last night arrested on suspicion of murder after a woman was found stabbed to death inside a house.

Neighbours described hearing an argument and police officers later discovered the body of the 46-year-old woman.

She had been stabbed several times in Sandgate Road, Brighton, East Sussex, and a man in his 50s handed himself at a police station after 6am on Thursday.

Detectives have now launched a murder investigation after the woman was pronounced dead at the scene.

The 46-year-old woman was found stabbed to death at a house in Sandgate Road, Brighton

The road was sealed off while scenes of crime officers began to search the area for evidence and officers carried out house-to-house inquiries.

Witnesses said they woke to find a huge police presence and much of the area blocked off for the early part of the morning.

Neighbour James Boardman said: ‘My partner thought she heard some sort of argument at about 11.30pm outside in the street and then a car driving off.

‘I was up at 7.30am and saw the police had cordoned off the whole road.

‘It’s awful and you can’t quite believe it when it happens on your doorstep.’

A 51-year-old man from Seaford, who police believe was known to the victim, was arrested on suspicion of murder and remains in custody. 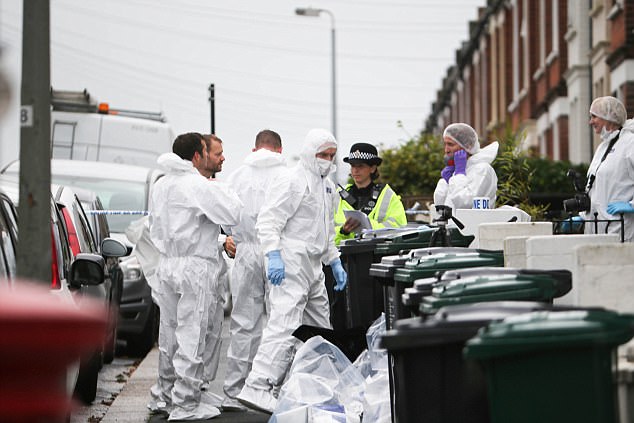 Officers are not looking for anyone else in connection with the death.

Detective Chief Inspector Till Sanderson, from the Surrey and Sussex Major Crime Team, said: ‘We would like to hear from anyone who saw or heard anything suspicious in or around Sandgate Road between 6pm on Wednesday and 6am on Thursday.’

Anyone with information should call police on 101 quoting Operation Navan.