Bring back the bungalow to cope with ageing population. warn MPs

More bungalows should be built in rural areas to help deal with an ageing population, MPs and peers said last night.

Growing numbers of pensioners face a ‘huge challenge’ to their independence as their two-storey family homes become increasingly unsuitable, they warned.

In 20 years, almost half of rural households will be owned by an over-65, said the all-party parliamentary group on housing and care for older people.

A report recommends that town halls ensure provision of new homes for pensioners – either small village developments with ‘six bungalows on an unused scrap of land’ or larger scale retirement schemes in nearby towns.

It said: ‘To attract older people used to non-urban, low-rise environments, the much-derided bungalow may need to make a comeback.’

Lord Best, the chairman of the group, said: ‘For all the advantages of living in the countryside, life can be pretty miserable if your home is no longer right for you: if you can no longer manage the steps and stairs, if maintaining the property is costing too much, if keeping warm is a trial and your energy bills a nightmare, if you can no longer tend the once-beautiful garden.

‘Indeed, if you need some support – and some company – but if these are not to hand, then country living can be tough.’

The report says major housebuilders are unlikely to help because they concentrate on larger sites and family homes for those using the Government’s Help to Buy scheme. To build more accessible and affordable homes tailor-made for older people, the report calls for an emphasis on housing associations, community-led initiatives, small builders and local landowners. 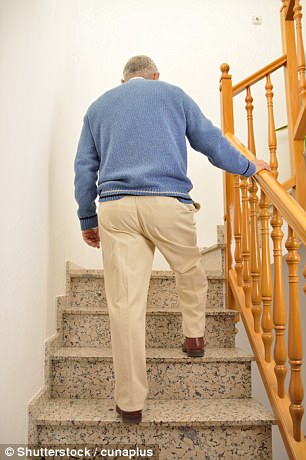 Sue Chalkley, chief executive of Hastoe, England’s largest rural housing association, said: ‘We have a ticking demographic time bomb in rural England as our population ages rapidly. Failing to act now will mean more loneliness, isolation and expensive trips to hospital as rural areas will be left with a housing stock completely unsuitable for its population.

‘Policy-makers must wake up to this challenge and ensure we have more houses suitable for the rural elderly and, crucially, the right sort of houses too.’

A separate report by the National Housing Federation suggests thousands of older private sector renters in England have borrowed money from friends and family, including their own children, in the past year to cover their rent.

Home ownership among young families has plunged over the past 35 years, an analysis shows.

The number of people on the property ladder more than halved in some regions amid soaring house prices, slow wage growth and tighter lending criteria, according to research overseen by the Resolution Foundation think-tank.

In outer London, the proportion of young home owners in the 25 to 34-year-old age bracket has plummeted from 53 per cent to 16 per cent.