Brisbane braces for BAT SWARM as 250,000 flying foxes to converge on city

Prepare for a bat INVASION: 250,000 flying foxes are expected to cause chaos in the city as they escape bushfire-ravaged areas

Brisbane has been swarmed by 250,000 bats trying to escape bushfire-ravaged regions – with more expected to plague Queensland’s southeast.

Hundreds of thousands of red flying foxes are set to take advantage of the recent rain and fly south hunting for food.

Last week, 250,000 bats descended upon Deception Bay, north of Brisbane, and a further 150,000 were seen at nearby Bongaree.

The Department of Environment and Science have warned residents the bats will soon make their way south and north to escape drought and bushfires.

‘They basically follow the flowering of plants; if the plants are flowering, that’s where they’ll go,’ he told the Courier-Mail.

The bat invasion comes after a helicopter was unable to reach a hospital after it was swarmed by 300,000 fruit bats in Ingham, in the state’s northwest. 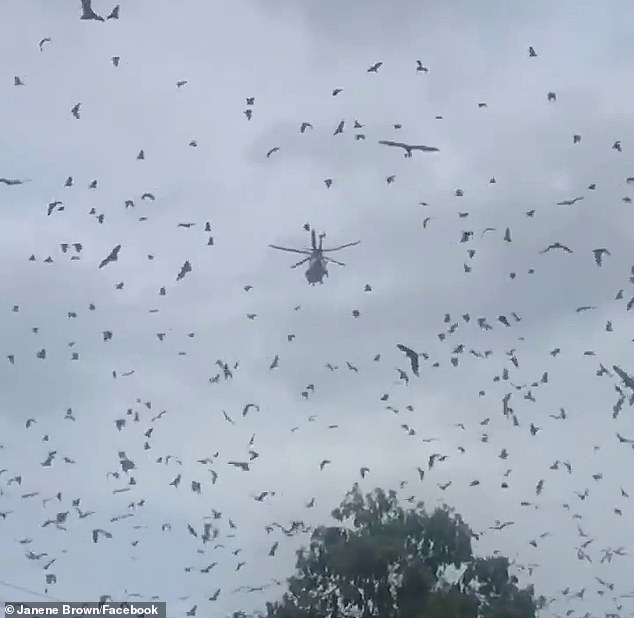 The bat invasion comes after a helicopter was unable to reach a hospital after it was swarmed by 300,000 fruit bats in Ingham, in the state’s northwest

Footage taken last Thursday showed thousands of bats blanketing the sky as a medical helicopter was unable to land on Ingham hospital.

Hinchinbrook Shire Council mayor Ramon Jayo said the town was reaching a ‘crisis point’ as the number of bats continued to grow.

Mr Jayo told the ABC the fruit bat population had destroyed all their traditional roosting spots and were expanding into sensitive areas.