A father has revealed the finals words he told his young son before he lost his battle with a rare cancer, which was only diagnosed after his family noticed he seemed ‘sluggish’ at soccer practice.

Richie Walsh, nine, from Brisbane, was diagnosed with rhabodomyosarcoma, a cancer that forms in soft tissue, in March last year around the time of his birthday.

After fighting the disease for more than 16 months, he passed away in hospital over the weekend surrounded by family.

‘I was cuddling Richie for a good long hour and I whispered into his ear,’ his dad Karl told the Courier Mail.

Richie Walsh (pictured) died on Sunday after battling rhabodomyosarcoma, a cancer that forms in soft tissue, for more than a year

‘I told him a lot of things but I told him – “it’s time to rest mate you have fought so hard it’s time to get that sleep you need and be free of all the pain”.

‘In the early hours of Sunday morning, 12.55am, Richie got that sleep and became an Angel. Forever nine our beautiful boy.’

Karl said Richie, known affectionately as ‘Little’ to loved ones, seemed perfectly healthy in the days leading up to his diagnosis.

The only sign something was amiss was the youngster seemed sluggish during a soccer game over the weekend.

‘I just thought it was because it was the first game back for the season, Karl previously told 7News.

But Karl and his wife Lisa became concerned on the Monday when he complained he was feeling short of breath and took him to the hospital.

Doctors struggled to figure out what was wrong and initially thought it was pneumonia.

They were about to send him home when they decided to do one last scan as a precaution.

‘I remember the lady scanning him, and all the senior doctors came in, one of them was the director of oncology – Lisa is medically trained, so she knew something was going on,’ Karl said.

‘It was a bit of a blur, they just took us into the room and said Richie has got tumours.’

The Walshs were given the devastating news Richie was already at stage four and that he only had a 30 per cent chance of survival. 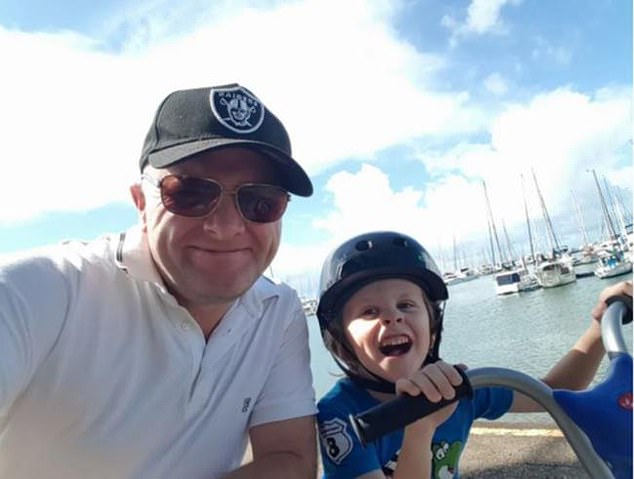 Tumours were found in his pelvis, the bone in his right leg, and his lung, but were inoperable due to their location.

Over the past year, Richie spent weeks in and out of hospital undergoing gruelling chemotherapy and radiation therapy, with his father launching a website Little Legends, dedicated to raising awareness about Richie’s battle.

A GoFundMe was also set up to help the Walshs, who are originally from the UK, raise money for Richie’s treatment after his father’s work hours were cut during the Covid pandemic and his mother Lisa, a midwife, was forced to give up her job to care for her son.

Adding to their devastating situation, they could only have one parent in the hospital at times due to Covid-19 and family overseas could not be in Australia to say their goodbyes.

Last week, an update on the fundraiser page revealed Richie had taken a turn for the worst and had been rushed to hospital after having trouble breathing.

Tributes have started pouring in for the fighter who is remembered by loved ones, friends, and class mates as a funny and strong ‘little dude’ who was adored by his family.

‘Richie means everything to the Walsh family, his older siblings Melissa, Luke, and Layla have worshiped him since the day he was born,’ the fundraiser organiser wrote.

‘He really is the heart of their family and the pain they are going through watching him suffer is unimaginable.’

His primary school St Joachim’s Holland Park extended their love and prayers to the Walsh family.

‘We know that you are now in heaven looking down on us, but you will be greatly missed at St Joachim’s.’

Rhabdomyosarcoma is a tumour of muscle which usually occurs in children between the ages of one and five years.

Most commonly the tumour may appear in the head or neck, including the muscles around the eye, in the back of the throat, in the cheek or in part of the ear inside the skull.

Chemotherapy helps to shrink the main tumour if it cannot be removed surgically at the beginning.

Sometimes both surgery and radiotherapy are needed. Treatment programs need to be adapted to the site of the tumour.