The Lions have sprung to the defence of Dayne Zorko – despite their under-fire captain launching a vile sledge aimed at opponent Harry Petty’s family in Brisbane’s humiliating 58-point loss to the Demons.

Lions general manager Danny Daly said the club has since moved on from the saga, and is more concerned with ‘just making sure Dayne is going okay’.

Petty was in tears and very visibly upset after Zorko reportedly sledged something  along the lines of: ‘I hope your mother dies’, according to the Herald Sun.

Zorko, who has a long history of poor sportsmanship on the field, is not likely to face any sanction for the matter. 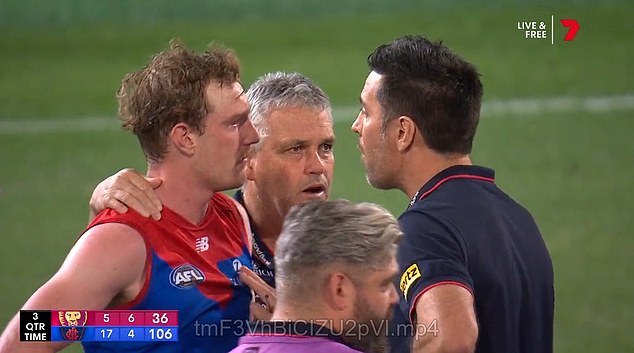 Daly said the club was now prioritising his wellbeing, after the fiery skipper copped a pasting from the entire footy industry.

‘The club addressed the issue with Melbourne on Friday night straight after the game, the club made a statement on Saturday morning and that’s where it sits,’ he told SEN.

‘To be perfectly honest, our goal right now is to make sure Dayne is okay … He came out and apologised on Saturday.’

There have been calls by many in the footy industry to strip Zorko of the captaincy, and the Lions star has also disabled his Instagram in the wake of the controversy.