A furious mum has revealed she was charged a $50 cleaning fee after her two-year-old son urinated in a ball pit at a children’s play centre.

Yan, from Brisbane, said every Wednesday, she would take her toddler son to the Cream House Premium Cafe so they could enjoy a music class, followed by lunch and playtime in the playhouse.

On Wednesday, June 23, the mum said her little boy ran over to her in tears after he accidentally wet himself while playing on the slide despite taking him to the bathroom just 10 minutes earlier.

‘My two-and-a-half-year-old son accidentally wet the playhouse. He went to play on the slide and accidentally urinated,’ she wrote in a one-star review online.

‘I did not try to hide it or run away as soon my son told me he had accident. I cleaned all the places where he urinated (he told me where it was). He is doing toilet training and does not wear nappy.’ 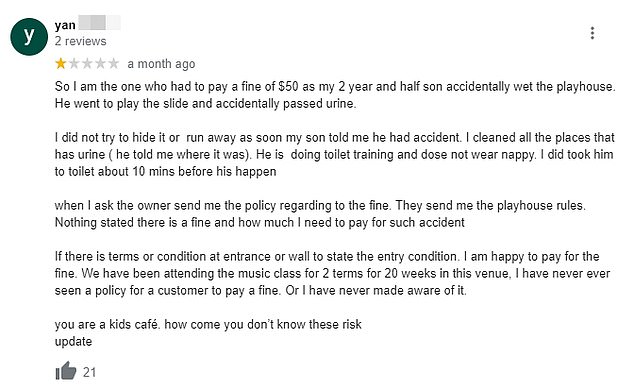 Shortly after cleaning up the mess, she was slapped with a $50 cleaning fee after staff members found urine ‘everywhere in the ball pit’.

But the mum mistakenly heard $15 due to the noise levels in the play area – and so she was happy to pay the fee and leave.

Upon checking her receipt at home, the shocked mum realised she had paid $51 – including an additional $1 credit card surcharge.

She called the cafe and demanded they send her the centre’s policy.

‘They sent me the playhouse rules but nothing stated the fine and how much I needed to pay for such accident,’ Yan explained.

‘If there are terms or condition at the entrance or wall to state the entry condition, I am happy to pay for the fine.

‘We have been attending the music class for two terms over 20 weeks, I have never ever seen a policy for a customer to pay a fine. I have never made aware of it.’ 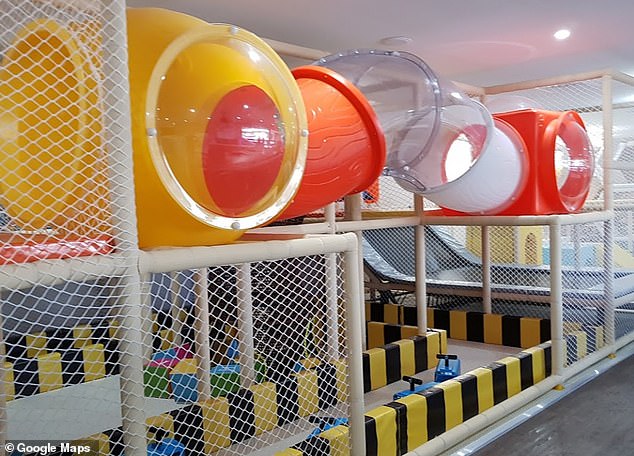 Yan said every Wednesday, she would take her toddler son to the Cream House Premium Cafe so they could enjoy a music class, followed by lunch and playtime in the playhouse

Cream House owner Rachel said customers are normally charged a $50 cleaning fee when they are required to hire a professional cleaning service.

‘The cost of commercial cleaning is $130. It’s not an easy job that we can do because we need to arrange for the public area to be sanitised. We are a cafe, I need to think about all the kids who visit here,’ Rachel told Daily Mail Australia.

Rachel said it wasn’t the first time Yan’s son urinated at her venue.

‘Her son has peed three times in other parts of our cafe before. The first two times we just quietly cleaned it up because it was on the floor so it was easy but the third time, he peed everywhere in the ball pit,’ she said.

‘I didn’t pee in the ball pit but I have to pay for commercial cleaning. It’s a huge job that cost us $130.

‘As a small business owner and a mum, every $1 we make is important to us. I know it’s hard being a mum but I need to take responsibility for the other families.’

Rachel said she has only ever charged one other family a $50 cleaning fee after their child vomited in the playhouse.

‘The parents were apologetic, they came over to tell us straight away. When we told them about the cleaning fee, they were happy to pay it – no drama,’ she said.