A 15-year-old schoolboy’s loud tuba playing during self-isolation has sparked a bitter neighbourhood dispute – with his next door neighbour leaving a passive aggressive note threatening to call the police.

Ryan Collier, from Brisbane, has practiced playing the tuba at 8am each day while home-schooling during the COVID-19 lockdown.

But the aspiring musician’s practice sessions irked one of his neighbours so much they dropped a letter in his family’s letterbox demanding he stop.

His mother Anne-Marie said the note had left her ‘fuming’. 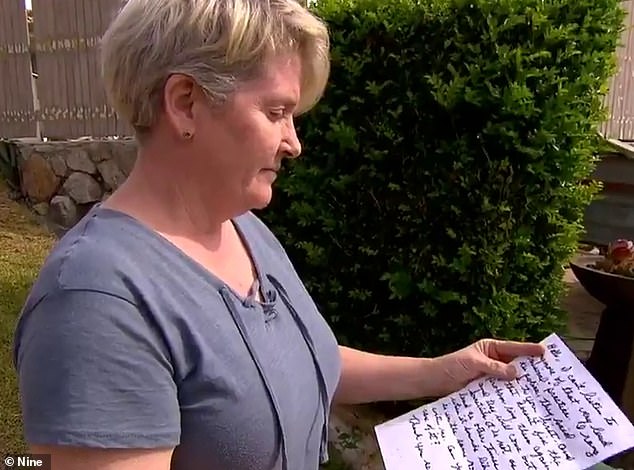 ‘We would not have had a problem changing practice hours but there was no talking – just the note,’ she told A Current Affair.

‘I was instantly angry.’

Ms Collier said her son had played the Last Post in their driveway on Anzac Day, and said she would not be telling Ryan to stop his music.

But the note said the neighbour had already reported the tuba playing to police, and threatened to call authorities again if the noise did not stop.

‘I apologise that his practice is annoying you but suggest you get some earplugs because i will most definitely NOT tell him to stop practicing,’ she wrote.

‘What the hell is wrong with you.

‘Please do call the police and (hopefully) they will tell you to pull your head in also.’

Her post split opinion, with some saying her neighbour was right to ask her son to stop playing music. 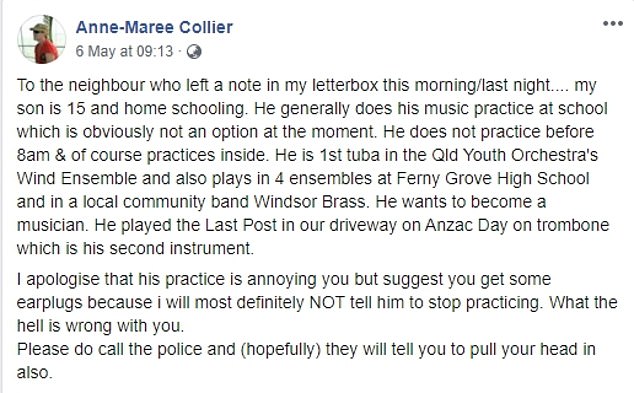 His mother shared her anger at the letter in a Facebook post and suggested they ‘get some earplugs’ if the nose from Ryan’s practice sessions annoyed them.

‘Police will not say ‘pull your head in’. How uncouth are you? Music can be annoying at the best of times,’ one person commented.

Others said though if the noise was such an issue, other residents should consider moving to somewhere with more land where they would not be disturbed.

‘I’d be getting him to practice earlier and longer just out of spite!’ one social media user wrote.

Her post split opinion, with some saying the neighbour was out of line but others telling her it was understandable police were called