Extraordinary before and after photos have emerged of a dam, highlighting the stark contrast between drought and floods in Australia.

Fifteen years ago, Lake Eildon in Victoria’s central highlands was almost empty at just 5.3 per cent full – a record low – and surrounded by dry, barren land.

Today, the dam looks much different at 100.4 per cent of capacity as the widespread flooding crisis across regional Victoria continues.

Even at the start of July, Lake Eildon was at 82.5 per cent capacity.

Many Aussies are delighted to see the dam full again.

This was Victoria’s Lake Eildon when it was at a record low 5.3 per cent capacity during a drought in 2007

‘It’s good to see it full again. Water in books is always welcome. Sometimes we don’t get how important and how valuable water is for all living creatures on this planet,’ one Aussie wrote.

Another added: ‘Never would’ve thought it’ll refill past 100 per cent ever.’

The photos brought back fond childhood memories for others.

‘I remember living there as a child and being constantly told to have quick showers and not to leave taps running because there just wasn’t enough water. This is absolutely amazing to see,’ one woman recalled.

Located in the regional towns of Mansfield and Eildon in the Victoria’s alpine region, the dam rarely filled during the drought in the early 2000s, causing great hardship for once-thriving holiday destinations around the lake unable to attract visitors.

Meanwhile, the ongoing flood crisis is far from over, with a number of emergency evacuation orders issued for part of regional Victoria on Tuesday morning. 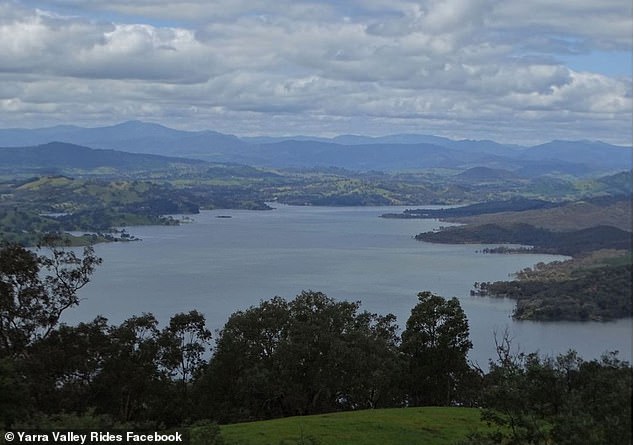 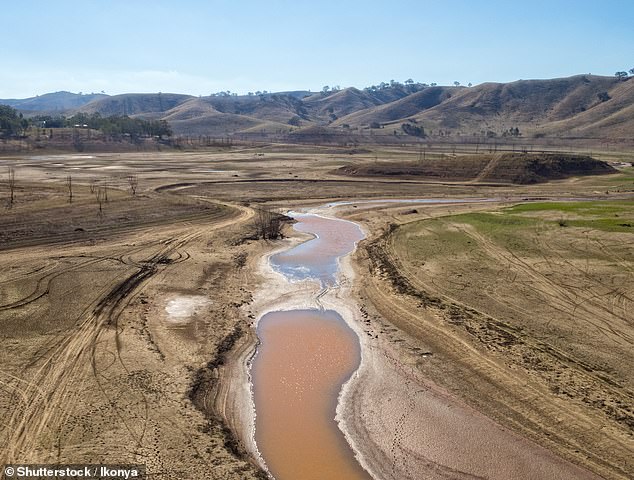 This old photo shows water is disappearing from the north end of Lake Eildon near Bonnie Doon, the town made famous by iconic Australian film The Castle

Already flooded areas have been warned to brace for more severe weather with some parts of Australia to receive more than 200mm of rain in the next seven days.

The east coast is set to be battered by more heavy rain and storms this week with extreme weather to begin forming on Tuesday.

On Tuesday the brunt of the weather is expected to settle over South Australia, the Northern Territory and western Queensland with central SA to see the most rainfall.

That rain will then start to spread further east on Wednesday and bring heavy rain to Queensland, NSW, ACT, Victoria and Tasmania.

The worst conditions of the system are expected to land on the NSW-Queensland border with more than 200mm expected to fall by Sunday.

Wednesday and Thursday are forecast to be the rainiest days for the region.

Mr Domensino warned the wild weather will bring severe thunderstorms that will reoccur throughout the week. 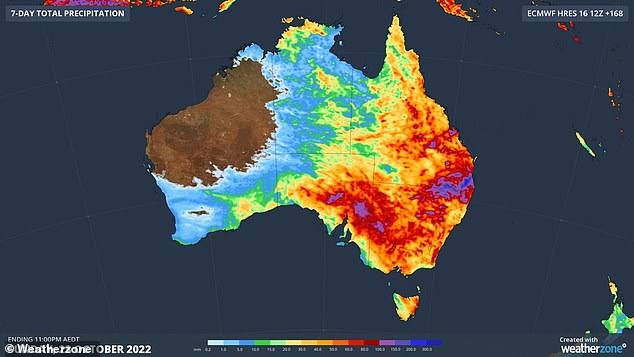 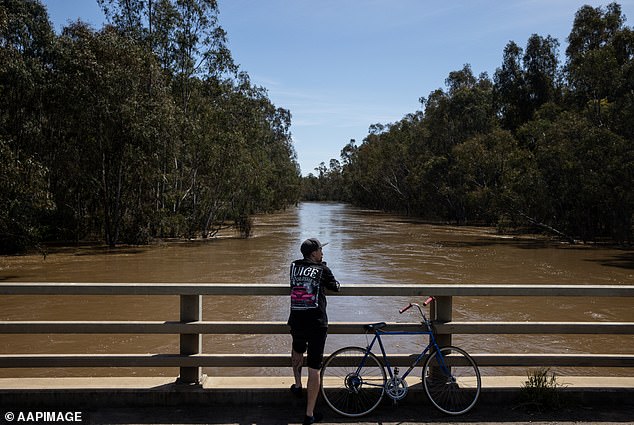 ‘Thunderstorms will be particularly dangerous over Queensland and NSW between Wednesday and Friday when daily severe storm activity is likely in both states,’ he said.

The centre and west of NSW, including the ACT, are expected to see more than 100mm of rain in the next seven days.

Sydneysiders can expect a soggy week with showers through to Sunday set to bring rainfall totals above 50mm.

Several regions across Victoria are forecast to receive more than 80mm of rain in the next week while recovery efforts from massive floods continues.

‘In some areas, this week’s wet weather will cause renewed river level rises and hamper clean-up operations,’ Mr Domensino said. 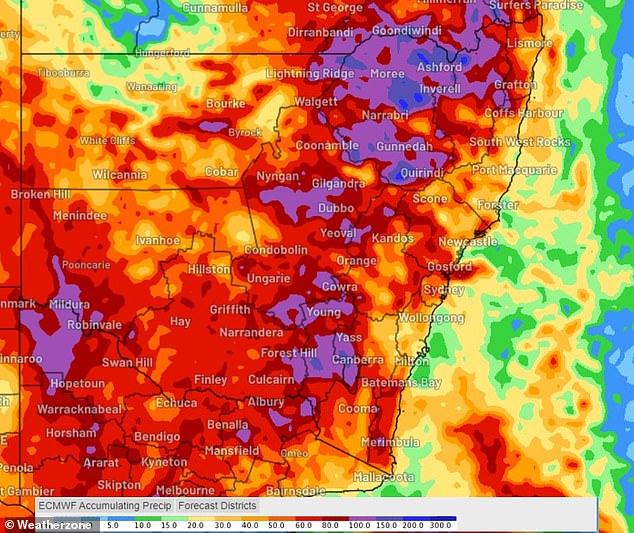 The system is also set to cause even more challenges for Victoria, where devastating floods have damaged thousands of homes.

‘There is another challenge coming later this week,’ Victorian Premier Daniel Andrews said.

‘We’ve still got the Murray to peak.

‘A number of communities haven’t peaked yet and we’re going to get more rain off that higher base so that’s going to present really significant challenges.’