Brisbane woman poisons flatmates’ dairy after fight over her kittens

A cat lover tried to poison her flatmates by spiking their milk and yoghurt after an argument over her kittens, a Brisbane court has been told.

Te Raukura Anahera Alexander, 20, was so angry with her two flatmates after clashing over her cats that she assaulted one and slashed all four tyres of the other’s vehicle in February 2021.

Alexander later admitted she had also put insect repellent extract into her housemates’ milk and yoghurt at their Brisbane inner city residence, telling them she ‘hoped they would die’.

Te Raukura Anahera Alexander (pictured) assaulted one flatmate and slashed all four tyres of the other’s vehicle in February 2021 after a fight over her kittens. She later admitted to putting insect repellent extract into their milk and yoghurt

Tensions at their shared Paddington home escalated after her 25-year-old male flatmate was scratched by one of Alexander’s kittens.

In the ensuing argument Alexander scratched the other housemate – a 20-year-old woman – on the hand as she tried to defend herself.

Police later arrived and overheard Alexander on the phone complaining about the 20-year-old, saying she was ‘going to kill her’.

The next morning the 25-year-old man discovered two of the tyres on his vehicle parked outside had been slashed and went to a police station.

He returned to discover the other two tyres had been punctured.

Alexander admitted to police not only damaging the tyres and the assault but also volunteered that she had put Mortein extract in her housemates’ dairy products.

Neither flatmate had consumed the tainted milk or yoghurt.

Judge Anthony Rafter said even if they had, there was ‘no suggestion it would have some serious consequences’.

Testing only found small traces of the Mortein extract in the milk.

Alexander was taken to hospital for a mental health assessment after her arrest and discharged the next day. 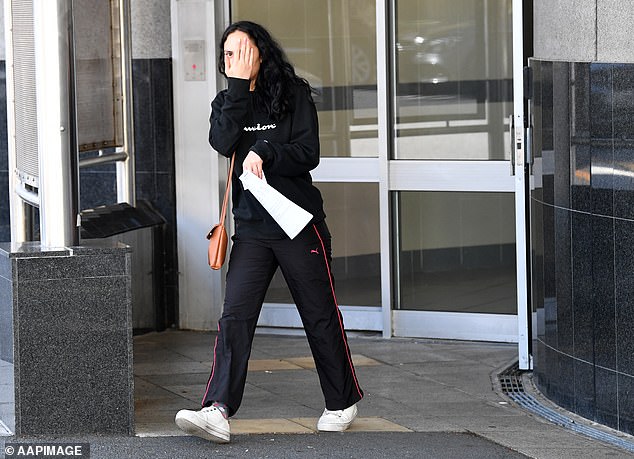 The 20-year-old woman pleaded guilty to one count of common assault and wilful damage and two counts of attempting to injure by noxious substance (pictured, Ms Alexander leaving Brisbane Watchhouse after being granted bail on Wednesday)

He tendered a psychologist’s report on Alexander that had identified ‘complex’ mental health, substance abuse and anti-social behavioural issues after a ‘dysfunctional’ early life.

Alexander on Thursday pleaded guilty to one count of common assault and wilful damage and two counts of attempting to injure by noxious substance.

Judge Rafter sentenced her to two years of probation, adding a condition that she receives psychiatric treatment.

She must also pay $600 for the damaged tyres.