A group of Brexiteers have formed a support group to discuss leaving the EU in a ‘safe space’ after claiming they had been branded Nazis and fascists in the city.

The ‘Leavers of Bristol’ meet monthly in a pub or restaurant to discuss the controversial topic.

Members say their pro-Brexit views have left them feeling ostracised in the city, where 61.7 per cent voted to Remain in 2016.

Some claim they have even faced racism and fascism at home and at work, so relish the chance to talk in private.

Jeremy, 62, said he was asked by his partner’s son the day after the vote if he was pleased with himself for ‘ruining his life’.

He said: ‘Being a Brexiteer has become conflated and bracketed as far-right, but essentially it’s just blanketing 17.4 million people as being fascist and racist or stupid.

‘I’ve been called a Nazi and a fascist because I voted to leave the EU.’

Vote Leave campaigner Nicky, 52, claims she was abused at work on the day David Cameron resigned as Prime Minister.

‘One girl just started screaming at me at work blaming me for his resignation,’ she said. ‘Another woman started crying.

‘While out campaigning with my Vote Leave banner in Bristol I’ve had people hurl abuse at me from their cars.’

It was initially conceived as ‘Leavers of London’ back in 2016 by a woman who said she felt at odds with her peers over her pro-Brexit views and sought the company of other like-minded people in the capital.

Within the last year the group, which claims to have thousands of members, has now launched nationwide, rebranding as the ‘Leavers of Britain’.

The Bristol branch was launched in January by Paul, 42.

He said: ‘A lot of people who voted Remain equated a vote to Leave with racism and with good reason felt appalled by that.

‘It prevents a lot of people who voted leave from being able to talk about it, because rightly they don’t want to be associated with something that has extremely negative connotations.

‘But actually most ordinary, sensible people have a whole host of reasons for voting leave, just as I’m sure people who voted remain did so for different reasons.

‘Unfortunately, there seems to be an acceptable prejudice from Remain voters that means they can accuse Leave voters of either being racist, uneducated, old and irrelevant or “chavs”, and then question whether these people should be given the right to vote in the first place.

‘If I’m honest, it’s just frightening and in many cases they are allowed to get away with it because they see themselves as being on the right side of history.

‘That’s what is great about Leavers of Bristol – it gives people the chance to talk about Brexit in an environment where they feel they are not going to be shouted down for it.’

Teresa, 70, who lost a 50-year friendship when friends decided they no longer wanted to go on holiday with her after they discovered how she had voted, said the meetings were ‘refreshing’. 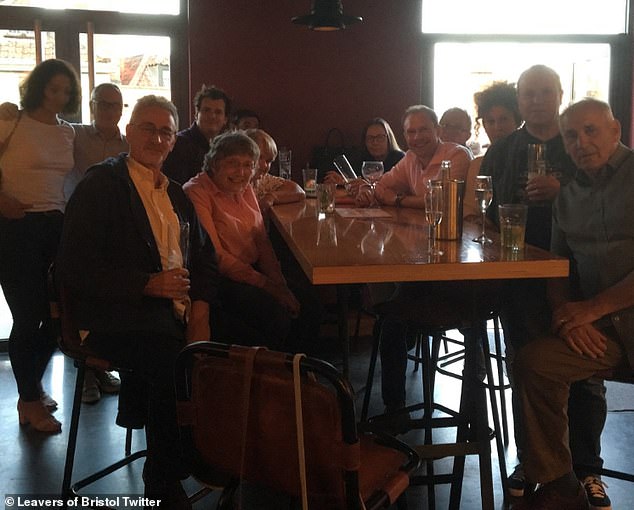 ‘There is a freedom to know you are able to express yourself, and your thoughts on Brexit, without the fear of being abused,’ she said.

‘Party politics doesn’t come into it – we all just share the belief that we need to leave the EU in order for our country to have a future.

‘The meetings are a chance to exchange ideas with people without any kind of fear that someone is going to suddenly turn round and insult you.’

He said: ‘For Tommy Robinson to associate himself with the Leave Means Leave campaign is an attempt to give his anti-Islamic agenda an air of respectability.

‘He is just hijacking a popular feeling to further his own aims which do not represent us or our beliefs.’

People online were quick to have their say on the group and Brexit.

Lewis Olliver said: ‘Hopefully, the “benefits” of Brexit impact these people the hardest.

‘Who cares how you voted in 2016, but to still support it in 2019 shows a lack of thinking power and a susceptibility to slogan propaganda.’

Another man quipped: ‘What’s on the menu, salty gammon?’