The Robins have moved quickly to reward Scott for his impressive progress and extend his contract at the first possible opportunity, on his 18th birthday on Saturday, until 2025.

England under-18 attacking midfielder Scott, 17, is rated as one of the Championship’s most exciting emerging talents and his style of play leading to him being nicknamed the Guernsey Grealish.

Midfielder Alex Scott, 17, is rated as one of the Championship’s most exciting emerging talents

Scott is also the subject of growing interest, with scouts from a number of Premier League clubs monitoring his performances for some time, increasing City’s desire to secure his long-term future.

Some of Scott’s admirers were at Ashton Gate on Friday night as he caught the eye despite Nigel Pearson’s side slipping to a 1-0 defeat to Swansea.

Scott made his City breakthrough at the end of last season and has cemented his place in Pearson’s plans this term, starting all four of their Championship games so far. 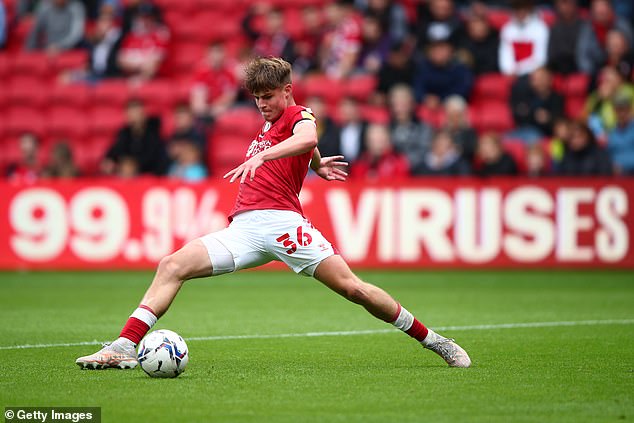 Scott was on the books of Bournemouth and Southampton before joining non-league Guernsey aged 16.

He became their youngest ever player when he made his debut in August 2019 but was snapped up by Bristol City just a few months later.