The student whose hapless Tinder date had to be rescued by firefighters after getting stuck in a window while trying to retrieve her own excrement has given a step-by-step demonstration of how the infamous night unfolded.

The hilarious incident happened when the female amateur gymnast went to the toilet at the home of 24-year-old student Liam Smyth in Bristol and blocked the bowl.

Speaking to Holly Willoughby and Phillip Schofield on This Morning, Liam, a postgraduate studying sociology, said: ‘We were having a really nice night, we got on really well and had a lot in common.

‘We were watching the Louis Theroux Scientology documentary and about an hour in she got up to go to the toilet.

‘She came back after a little while and said, “I don’t know how to tell you this Liam, I know it’s really awkward but I went to the toilet, it wouldn’t flush and I panicked and I wrapped it up in toilet paper and I threw it out of your window.”‘

He added: ‘I was shocked but said, “We’ll get a plastic bag and we’ll go out to the garden and deal with it” but unfortunately that’s when we discovered it was trapped between two windows.

‘The outer window was double glazed and solid to the outside from bottom to top and you can’t open it.’ 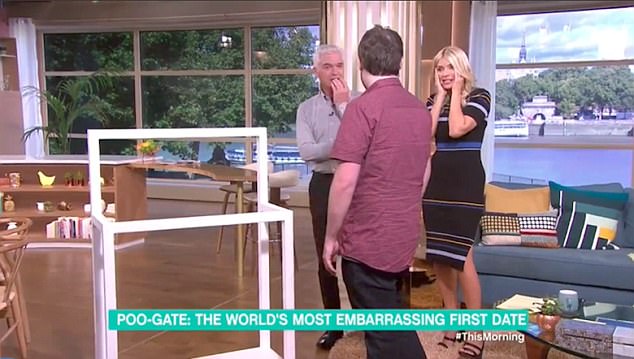 Speaking to Holly Willoughby and Phillip Schofield on This Morning, Liam, a postgraduate studying sociology, said: ‘We were having a really nice night, we got on really well and had a lot in common’

Liam went on to explain how his date tried to put her amateur gymnastics training to good use by retrieving the excrement herself.

He said: ‘The original plan was to use a hammer and chisel to smash the window and be done with it but she did some amateur gymnastics and she thought she could reach down into the window and pull it back out.

‘She was reaching and reaching but couldn’t quite get there so she put her head and shoulders in and I sort of boosted her up to help her in. She reached it, passed it back and we launched it into the toilet.’

After she became wedged in the window Liam had no choice but to call the fire service who rescued her after around 15 minutes.

He added: ‘I don’t think the fire brigade quite believed what was going on. At first I told them she’d dropped her phone. 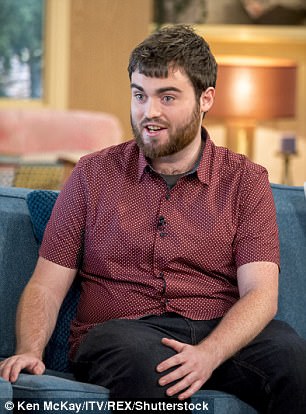 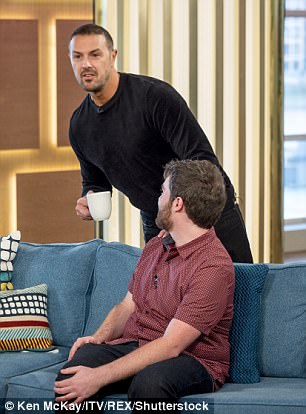 An incredulous Paddy McGuinness (right) even dropped by during the segment to say: ‘Out the window, is that right? For the love of God!’ 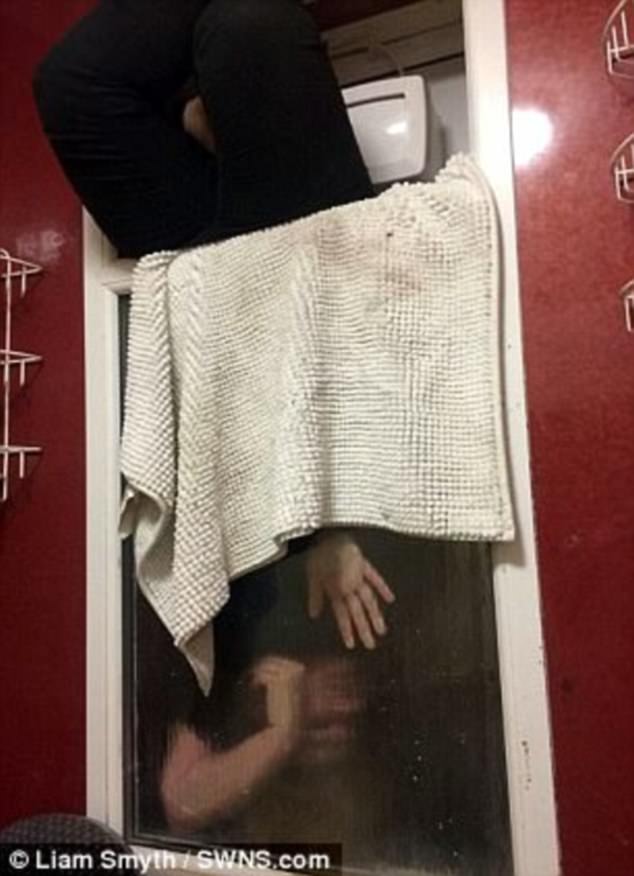 Mr Smyth’s date was unharmed, but as for his bathroom window – it was completely destroyed by the firefighters’ tools

‘I certainly owe her a drink after all this. No matter what happens I’m sure we’ll remain firm friends.’

An incredulous Paddy McGuinness even dropped by during the segment to say: ‘Out the window, is that right? For the love of God!’

Viewers were left in stitches watching the student describe the ordeal.

Hannah Pearce joked on Twitter: ‘Hope she got a day off in loo!’

Mr Smyth’s date was unharmed, but as for his bathroom window – it was completely destroyed by the firefighters’ tools.

Liam has now raised £2,775 via a GoFundMe page to replace the window – with the remainder being donated to charities that support firefighters and that build toilets in the developing world.

Last week, a woman claiming to be the date in question claimed in a Reddit post that she was ‘literally on my knees cringing and apologising’ to him after what happened.

Replying to comments online, a woman said: ‘I am indeed the shamed Shirehampton s*** slinger. My friends have been comparing me to Miranda Hart.

‘It’s not something I’m proud of, but people are laughing, and if I’m making people happy then I’m not going to complain.

‘It was a panic response and within seconds I knew I’d made a terrible mistake. I would have left, but I just couldn’t do that to him.

‘I make bad choices sometimes but I like to think I’m not a bad person, and to me that would have been bad [to leave].’

She added: ‘I feel like if I had and he’d found me out after though I’d probably be in a worse position now. I swear I was literally on my knees cringing and apologising.

‘[Mr Smyth] he was so good about it though, just laughed with me rather than at me. It was one of the hardest things I’ve ever had to say.

‘It was a moment of panic, and I read about a woman on Twitter who wrapped the poo and put it in her bag – I didn’t have a bag, and I don’t know why the window seemed the next best thing. 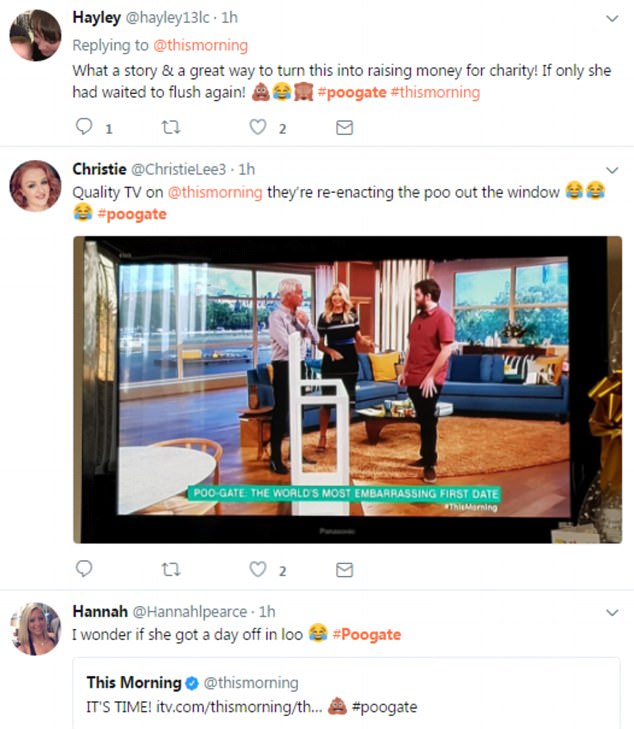 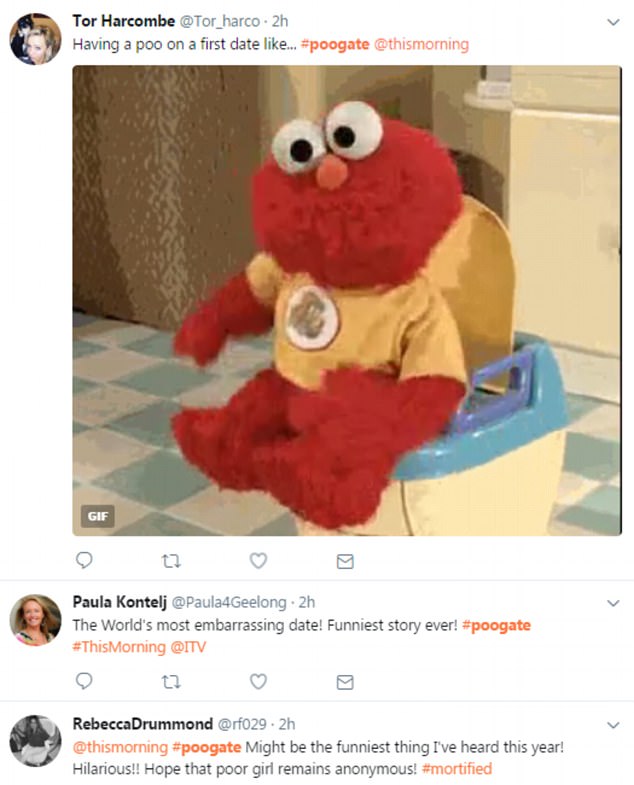 ‘I have many regrets. I figured a s**t in the garden, while weird, would not definitely be me. We live in an area with a lot of junkies etc, so prolly [sic] could have got away with it… maybe…it genuinely wasn’t that big – his toilet was just dodgy.’

After the story went viral, director Louis Theroux, whose documentary they were watching when the event occurred, tweeted: ‘Honoured to be part of this important story.’

Avon Fire and Rescue service confirmed they received a call on August 7 to Smyth’s address.

A spokesman said: ‘We received a call at 10.41pm to one female trapped between interior and exterior glass. Two crews were sent from Temple station and she was rescued using hand tools.’

The crew later tweeted: ‘An eventful evening for Temple fire crews’, while sharing a link to Mr Smyth’s GoFundMe page.