Dakota Meyer has claimed that he knew his relationship with Bristol Palin was doomed right after they tied the knot.

The former Marine, 30, discussed his breakup from Bristol, 27, in a new interview with People, detailing the moment that he knew their relationship was over.

Bristol and Dakota, who are parents to two-year-old Sailor and one-year-old Atlee, split earlier this year, with Bristol confirming in August that the proceedings had been finalized.

Speaking out: Dakota Meyer claimed he knew his relationship with Bristol Palin was doomed right after their wedding. The pair is pictured with daughters Sailor, two, and Atlee, one 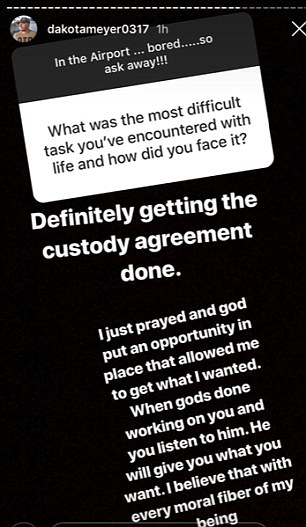 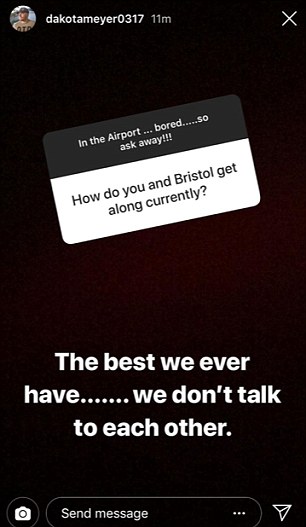 Burn: Last month, Dakota took to Instagram to reveal details about how his relationship with Bristol has progressed since the divorce, revealing that they ‘don’t talk to each other’ anymore

However, while their relationship has officially ended, the final weeks and months of their marriage are now being thrust into the public eye as part of the newest season of Team Mom OG, which sees both of them airing their grievances in front of the camera.

Monday night’s season premiere of the MTV show saw both of them fighting furiously, with Bristol calling out the veteran for treating her like a ‘punching bag’ while dealing with his PTSD. 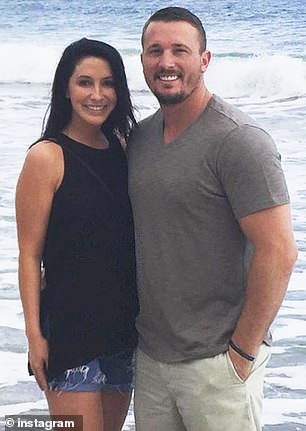 Happier times: Dakota says that he and Bristol, pictured before their divorce, faced insurmountable struggles from day one

And while the show started filming before their split, Dakota insisted to People that the series wasn’t to blame for their divorce.

‘This relationship was done way before Teen Mom OG,’ he told the magazine.

Dakota then joked that he knew the relationship was over ‘the day after we got married’, according to People.

‘Our relationship has had struggles from day one, I think we tried our best,’ he added. ‘I can definitely say that I tried in this relationship.’

Bristol and Dakota married in June 2016 in a discreet ceremony after calling out a previous wedding in 2015.

Monday’s episode of Teen Mom OG clearly showcased the severe tension between the couple, as it was revealed that Bristol saw Dakota’s battle with post traumatic stress disorder as a major reason for the rift between them.

The mother-of-three, whose eldest child Tripp, nine, her son with ex Levi Johnston, is appearing on the new season of Dancing With The Stars: Juniors, was seen telling Dakota that she  is tired of being treated like his ‘punching bag’, adding that his behavior is ‘hard on our marriage’. 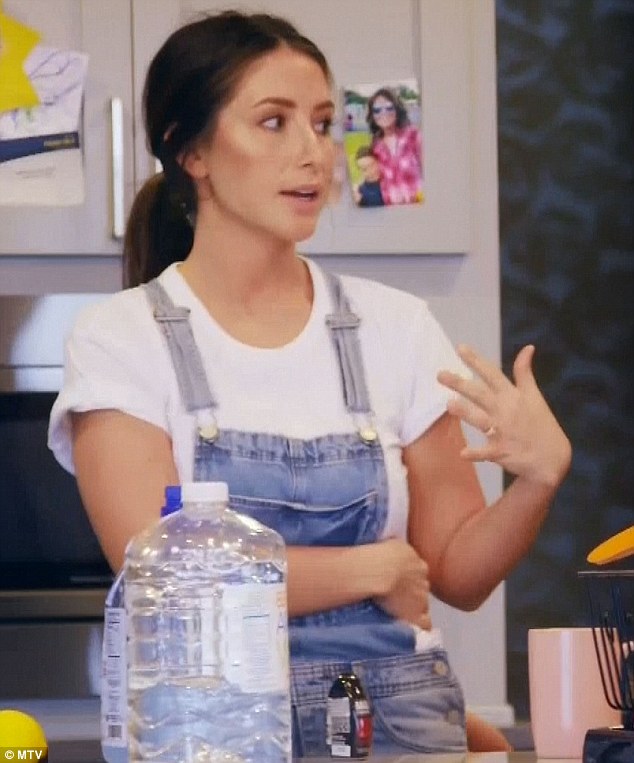 Intense: Bristol, 27, was seen getting into a verbal fight with her husband Dakota, 30, on Monday’s episode of Teen Mom OG 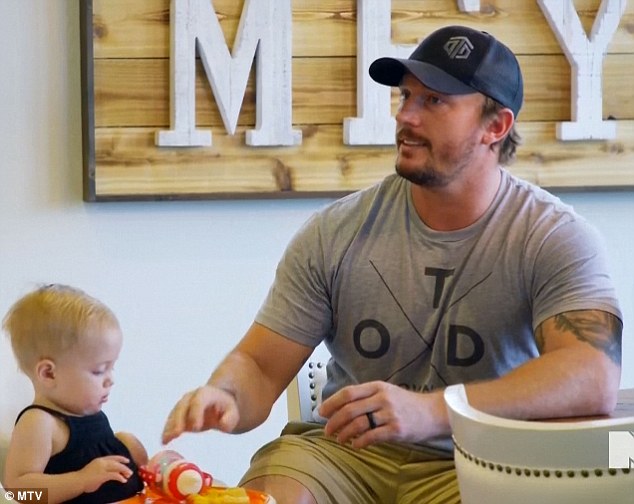 Struggle: Dakota suffers PTSD from his time in the armed forces. Bristol said on Monday’s episode of Teen Mom OG that the condition has been ‘hard on our marriage’

At the start of the episode, Bristol recalled the couple’s rather hasty engagement, revealing that it started with a mall-bought ring, before the two then rushed to a golf course where an officiant signed a paper.

And while it might seem romantic on the surface, Bristol admitted during the show that she has regrets about just how casual their marriage was.

‘We didn’t say vows or anything like that… we didn’t even take one picture of the day,’ she admitted.

Dakota reflected on his argument with Bristol in his interview with People, telling the magazine: ‘I’ll take the responsibility for that. I think Bristol did the best that she could do. I think that’s what we all see in that episode. All I wanted was empathy.’

He added about his PTSD: ‘This is a normal reaction to abnormal circumstances. [People who have it] deserve the utmost respect, understanding, and empathy about what they go through.’

From the get-go, Bristol and Dakota’s relationship was up and down.

The pair’s 2015 split took place just days before their first wedding ceremony was scheduled. They reunited not long after and then tied the knot in a last-minute celebration in June of 2016.

Less than two years later however, the pair had split again, with DailyMail.com revealing exclusively in February of this year that Dakota had filed for divorce.

And now, Teen Mom OG will capture the final few months of their marriage as it fell apart, with Bristol captured on camera turning to her family in order to get advice for how to deal with her crumbling relationship.

She was seen in a segment traveling back home to Alaska for her sister Willow’s bachelorette party, which took place in July, and discussing her failing relationship with her family, explaining to them that she felt as though her life had been turned upside down since she married Dakota. 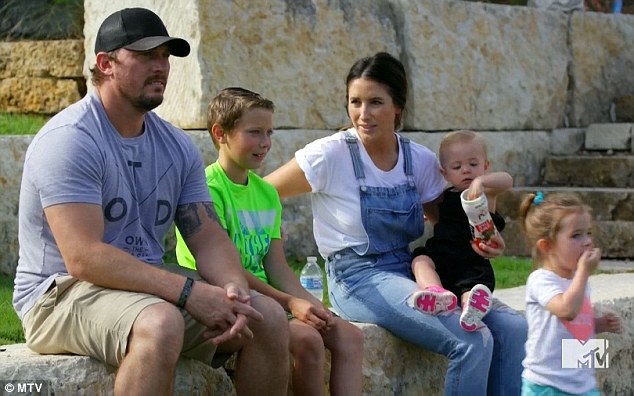 Family: Dakota and Bristol appeared together on Teen Mom OG with their daughters Sailor, two, Atlee, one, and Bristol’s eldest son Tripp with her ex Levi Johnston, nine Ending it: In August, Bristol confirmed that it was Dakota who filed for divorce and claimed that she was not able to go back home to Alaska because of their custody agreement

‘I was super, super, super independent before I got married,’ she told her sister and her mother Sarah.

‘I was a single mom forever. I liked my own things, having my own schedule, being able to discipline Tripp how I wanted to. All these other things.

‘And then, when you get married, you lose all that because you have to sit here and talk to someone else, get their opinions, get their voice. You know, everything else. It’s been challenging because I think we were already grown up and set in our ways when we got married.’

Bristol also confessed that she was struggling to make friends in Texas.

‘I’m so shy and awkward, I do not have friends,’ she said. ‘My life is frickin’ not perfect at all, my life stinks up and down, sideways, whatever.’

After returning home to Texas from the bachelorette party, Bristol then tried to confront Dakota about his behavior — a conversation that quickly turned into a blazing argument between them.

‘I have been trying to tell you for a week,’ Dakota told Bristol when she asked what was wrong with him.

‘My anxiety has been going nuts. It’s been crushing me. I’ve been having nightmares.’

And when Bristol asked what she could do to help him through it, he fired back saying that he has asked her for help ‘a thousand times’ but that she has always refused to give him what he needs.

‘All you wanna do is tell me all the things that are wrong with me and all the things I do wrong when I have anxiety,’ he told her. ‘That’s all you do.’

As they continued the conversation, the tension between them grew, and soon enough descended into a furious shouting match.

‘At the end of the day, I watched my whole f**king team die on September 8, 2009,’ he later told the producers. ‘There’s not one day I don’t wake up and I don’t see those guys. Listening to them screaming on the radios for it.

‘And I’ve got to sit here and listen to her tell me it’s a f**king excuse? “I don’t know what’s PTSD and what’s not.” Are you kidding?’

He later added: ‘All I want her to do is love me and be there for my scars. And I still get up and pay the bills, and I’m still being a good father, and I’m still trying to be a good husband.

‘It’s not like I go to hotel rooms and lock myself in for a week and drink, or I beat my wife, or I do all these things because I say some things whenever I’m upset.’

However, Bristol insisted that Dakota made comments that insinuated she was ‘a crappy mom’, while also adding that she worried in the past that her husband — who confessed to sleeping with a pistol when his PTSD was at its most severe — would ‘kill himself’.

‘I don’t want to raise my kids to think that this is what a marriage looks like,’ Bristol admitted, later adding: ‘I think that our marriage was something that was very fast, and he would agree.

‘I do go to sleep at night knowing that I’ve tried my hardest. Is it unfortunate how things have ended up? Absolutely. But I go to bed knowing that I have given it my all.’