Bristol wife died in car crash with husband after seizure

An elderly couple drowned together when the wife had a seizure and plunged their car into a river – but an inquest heard she had been stripped of her licence after suffering fits for 50 years.

Poppy collectors Joan and John Tipler had been driving home when their Renault Clio careered off the road, Avon Coroners Court in Bristol was told.

Their family had pleaded with her to stop driving, despite the DVLA deciding she was in a suitable physical state to get back behind the wheel.

The couple were ‘stalwarts’ of their community in Bristol and were active members of their local Royal British Legion Club.

Mrs Tipler, 73, had a long history of suffering seizures and had previously had her licence being taken from her.

However, her licence was given back and her family had repeatedly asked her to stop driving, the inquest heard.

Loved ones had even contacted the DVLA to make them aware of the situation – but a response only came back two days after the couple’s death, it was said.

The retired nurse had her licence reinstated nine to twelve months prior to their deaths -This was despite continuing to suffer occasional seizures and family members requesting she give up driving altogether, it was said.

Their joint inquest heard they died on April 26 this as they drove home from the club.

He said: ‘I think the most likely scenario here is that Joan has had a seizure, and that has been the cause.

‘All that is left is for me to offer enormous sympathy to the family, who did all they could do with regards to the tough job of persuading elderly parents to give up their licence.’

A statement from the couple’s daughter-in-law Jenny Searle, said: ‘We had seen her suffer a small seizure in January this year, and we had suggested she sell the car and stop driving.

‘But they both said there was no reason to, as the seizures weren’t frequent enough and they didn’t use the car that often.’

She added that the couple’s son, Christopher Searle, had even contacted the DVLA to make them aware of the situation – but, tragically, a response only came back two days after the couple’s death.

Mrs Searle said: ‘This has been a terrible tragedy for the whole family. The one saving grace is that they were together – just like they always were when they went anywhere.’

Joan and John, 69, of St Phillips, Bristol, drowned while driving home from their Royal British Legion club at around 11pm.

Their inquest heard Joan had dropped her husband off for the evening and had gone back to pick him up later, as John did not have a driving licence.

Collision Investigator PC William Gibson, of Avon and Somerset Police, said the couple had been driving home along a ‘predictable’ route down single-carriageway Feeder Road, when Joan had lost control of the car and mounted the curb.

PC Gibson said: ‘The car had only gone about 800 yards from the Royal British Legion club when it left the road and mounted the nearside footpath.

‘When I investigated the scene I could see no obstruction of the road itself or any surface contaminates that could have caused the diversion.

‘All components of the car were also working fine at the time of the accident.’

PC Gibson added that the road was well-lit and the road markings were clear.

He said there was no evidence to suggest that Joan had been driving at excessive speed along the 30mph road, or that she had accelerated or gained speed.

The inquest heard that Joan was on two different medications – Phenobarbitol for her seizures, and Mirtazipine for spells of depression that she had reported to her GP. 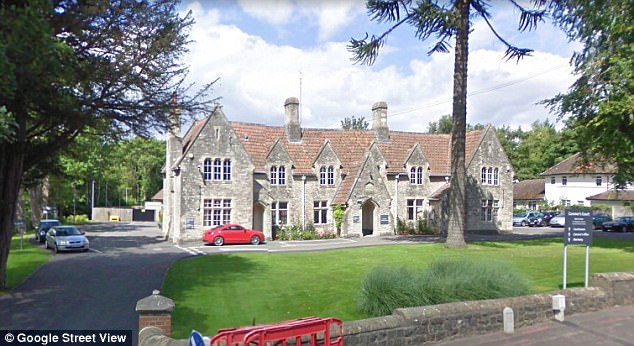 But pathologist Dr Newton Wong ruled out the death being related to either medication, saying the levels of Mirtazipine were ‘well below therapeutic level’.

The inquest, filled with immediate family members, heard that Joan and John were well-loved in their community, with 300 people attending their funeral.

The couple ‘went everywhere together’, with both getting involved in the annual Royal British Legion poppy collection, and Joan accompanying John to the bowls club – which he played at county level.

Speaking after the inquest, Joan and John’s son, Christopher Searle said: ‘There’s nothing that’s come as a surprise.

A verdict of accidental death was recorded.