In recent years, he’s been lauded by countless fashion critics for his choice of bold red carpet looks, which have blurred the lines of tradition.

And Billy Porter stayed true to form on Tuesday evening, when he stepped out in eye-catching style for the 2021 Brit Awards, held at The O2 in London.

The Pose star, 51, exuded glamour in a black satin gown, which boasted a high neckline and lacy long-sleeved arms and was teamed with a wide-brimmed hat.

With the lace feature also descending to his legs, the Pennsylvania native left the real statement for his footwear: a pair of towering platform black leather boots.

As well as turning heads with their height, the boots featured clear perspex heels, while the toes were capped with angular sheets of metal.

Complementing his metallic boots with an embellished silver handbag, the actor accessorised with a selection of sparkling jewellery, while black and silver eyeshadow further jazzed up his look.

American Horror Story star Billy was seen posing up a storm as he stepped out of a chauffeur-driven Audi to take to the red carpet at the event. 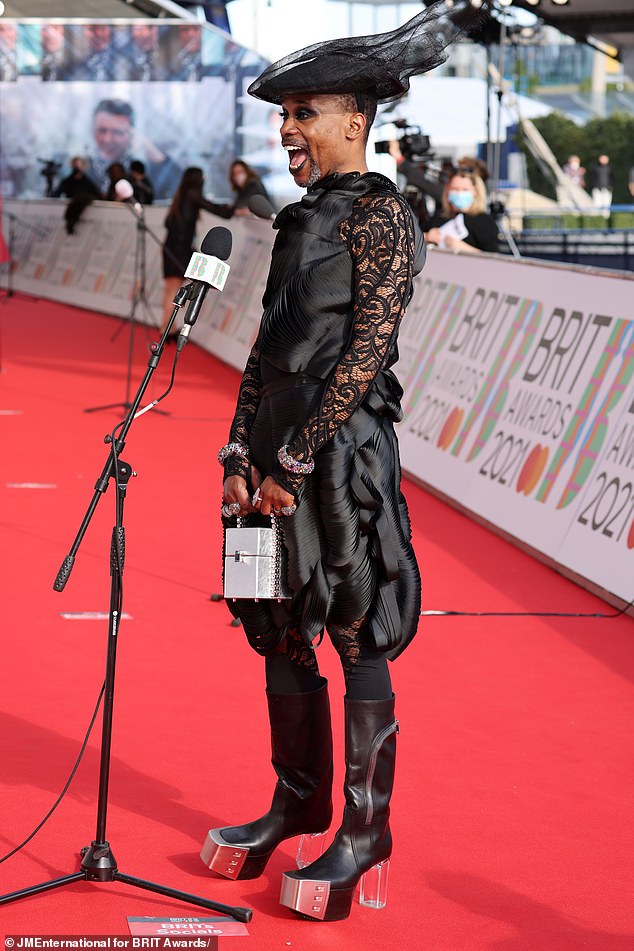 Exuding glamour: The Pose star, 51, exuded glamour in a black satin gown, which boasted a high neckline and lacy long-sleeved arms and was teamed with a wide-brimmed hat

The 2021 Brit Awards  hosted by Jack Whitehall, will mark the first major indoor music event in over a year as bosses released 2,500 free tickets to key workers.

The Brit Awards are taking place in front of a live audience of 4,000 people at London’s The O2,  six days before the next phase of lockdown lifts.

The ceremony, which will be broadcast live on ITV, will celebrate the return to live music and nominee Dua Lipa has promised those attending that it will ‘be a night to remember’.

The indoor ceremony and live show will form part of the Government’s scientific Events Research Programme, and it will use enhanced testing approaches to examine how events can take place without the need for social distancing after all restrictions are lifted on June 21.

Working closely with the Government to adhere to safety guidelines, this means The BRITs, will be the first live music show at The O2 in over a year, with 4,000 tickets being up for grabs- just one fifth of the venue’s 20,000 capacity.

The BRITs will play an important role in paving the way for the return of live music at scale as the UK emerges from the past year’s restrictions.

Audience members will not be socially distanced or required to wear face coverings in the arena, but they will be required to follow existing Government guidance when travelling to the venue and adhere to rules set out by the event organisers.

Among the rules, attendees must have proof of a negative lateral flow test result to enter the venue.

As part of the wider scientific research on the trial events, attendees will also be asked to take a test after the event to gather further evidence on the safety of indoor settings, reduced social distancing and the removal of non-pharmaceutical interventions like face coverings.

The show is set to award Taylor Swift – who will make history as the first ever female to be given BRITs Global Icon Award at the ceremony.

The 11-time Grammy Award winner, 31, will join former winners Elton John, Robbie Williams and David Bowie in being given with the award in recognition of her impact on music across the world and incredible repertoire and achievements to date.

In numbers provided by Official Charts Company, Taylor is the UK’s biggest selling artist of the year to date in 2021 and has sold over 114m albums worldwide with total global audio + video streams reaching 78b.

Taylor is the only artist in history to have four consecutive albums – Speak Now, RED, 1989 and reputation – sell over one million copies in their week of release.

She is also the only artist to have nine albums each sell at least half a million copies in a single week, with Fearless, Speak Now, RED, 1989, reputation, Lover, folklore, evermore, Fearless (Taylor’s Version).

Taylor is nominated for a second BRIT award this year for International Female Solo Artist, her sixth BRIT nomination to date.

The Icon gong is the highest accolade given and is reserved for truly exceptional artists – following on from Elton, Robbie and David.

Nominations were unveiled in March, with Celeste, Dua Lipa, Joel Corry and Young T & Bugsey joining Arlo Parks in receiving three nominations each, and Jessie Ware, J Hus, Bicep, AJ Tracey up for two awards as with Headie One.

CELESTE NOT YOUR MUSE